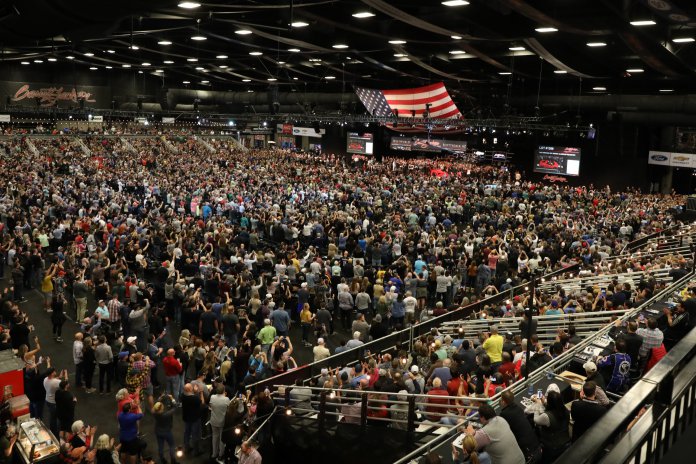 Arizona Auction Week is revving up and one of the highlights of this collector car extravaganza is the annual Barrett-Jackson collector car auction in Scottsdale.

“It’s one of the greatest car shows in the world, very interactive, ride and drives, said Craig Jackson, chairman and CEO of Barrett-Jackson.  “We’re going to be unveiling vehicles then selling them for charity. You’ve got drifting, hot laps, live music areas outside.”

Barrett-Jackson gives back to the community with charity car auctions and the support of celebrities. Grammy winning recording artist Pitbull is auctioning his customized 2022 Karma GS-6 EV “305 Edition” with 100% of the hammer price to benefit the Selfless Love Foundation and The SLAM Foundation.

Singer-songwriter Bret Michaels is auctioning his personal 2007 Bentley Continental GT, with a portion of its proceeds going to his Life Rocks Foundation. Michael and actress Sharon Stone are collaborating to promote the sale of a 1973 DeTomaso Pantera, with all the proceeds benefiting the Barrow Neurological Foundation.

“We’re selling the 2022 Carmen and Pit Bull will be here in person on Saturday night,” Jackson said. “The car before that is Bret Michael’s Bentley, that we are selling with Bret. The next car we’re selling is a 1973 DeTomaso Pantera for the Barrow Neurological Center. Bret is going to help us sell that car also, with all the proceeds going to the Barrow Neurological Center. Barrow operated on him twice and has saved his life twice and Sharon Stone’s.”

Supercars are prevalent throughout the auction docket and the advancements in automotive technology will be on display for attendees during the nine-day auction.

Known as the first hybrid supercar, a 2014 McLaren P1 is available on Saturday January 29. It’s powered by a twin turbo 3.8-liter V8 engine with a factory-rated 727 horsepower and a 176-horsepower electric engine for a total of 903 horsepower. This hybrid supercar has a top speed of 217 mph.

Also on Saturday is a 2015 Porsche 918 Spyder, #449 of 918 produced, crosses the docket. It features a naturally aspirated 4.6-liter V8 engine that produces a factory-rated 608 horsepower. The hybrid supercar also has a pair of electric motors that produce a combined 282 horsepower for a total output of 877 horsepower and the 918 goes from 0 to 60 mph in 2.2-seconds.

The Ford GT will be well represented on the docket, including a 2020 GT. Ford put a stipulation in the sale of 2020 GT that prevented owners of the supercar from selling for two-years.

“We have classics, we have cool customs, we’ve got three cars from the different Fast and Furious franchise,” Jackson said. “Having guys like Bret Michaels come here and sell his personal car and help with charity, I can’t thank him enough. I think it’s going to be a great year.”