The 1952 competition coupes have become iconic, esteemed and very valuable 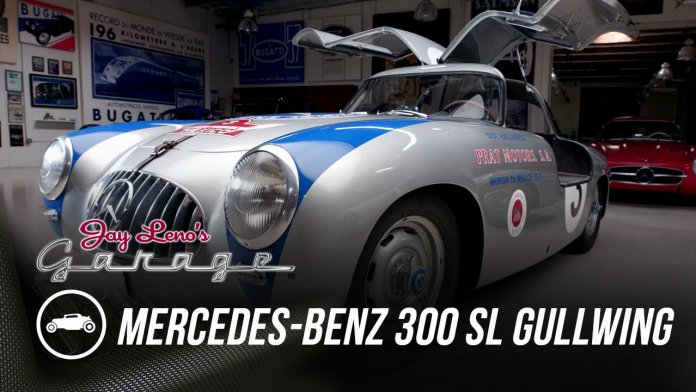 If you’re a fan of classic European cars, the Mercedes-Benz 300SL Gullwing has to sit at or near the top of your list. This episode of Jay Leno’s Garage features two very special Gullwings. Michael Kunz, manager of the Mercedes-Benz Classic Center, brought two of the earliest Gullwings in existence to the garage.

Both Gullwing coupes (codenamed W194) were manufactured in 1952, but are quite different from each other. The blue-and-silver race car is the fifth Gullwing built, while the all-silver car is the 11th Gullwing, and it served as a prototype for planned 1953 racing-season upgrades. It also served as a template for the later SL road car, which is why Leno calls it the “oldest Gullwing.”

To minimize weight, Mercedes engineering boss Rudolf Uhlenhaut devised a tube-frame chassis that necessitated the Gullwing’s signature doors. The chassis required thick side sills, which didn’t leave enough room for conventional doors. Practicality wasn’t a priority, as the 300SL was intended to be a race car only. Mercedes only built a road version after lobbying by American importer Max Hoffman.

While chassis construction was fairly exotic, the Gullwing used a 3.0-liter inline-6 based on the engine used in the everyday Mercedes 300 sedan. It was titled sideways to fit under the SL’s low hood, and fitted with dry-sump lubrication.

The blue-and-silver race car has the Carrera Panamericana-spec engine, which is carbureted (later cars had a very early version of direct injection), displaces 3.2 liters, and produces 180 hp instead of the standard 170 hp for carbureted cars. The all-silver car has the later fuel-injected 3.0-liter M198 engine that was fitted to the SL road car, producing 225 hp.

The SL’s character changed significantly over the ensuing decades, drifting away from pure performance toward luxury. In an attempt to bring the car back to its roots, Mercedes tasked its AMG division with development of the latest SL. Just don’t expect any Gullwing doors.

Like most episodes, Jay gets behind the wheel at the end of the video, which is a special treat given the car is the 11th SL ever produced. It’s a rare opportunity to hear this car in action.