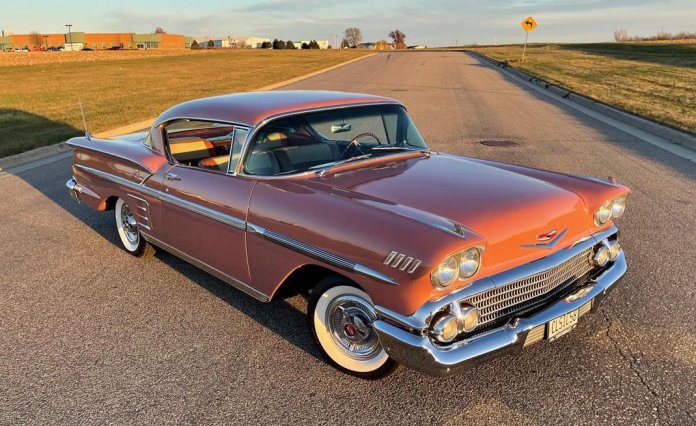 To celebrate its 50-year anniversary in 1958, GM released an anniversary model for each of its brands. There was the Eldorado Seville for Cadillac, Limited Riviera for Buick, Starfire 98 for Oldsmobile, Bonneville Catalina for Pontiac and a Bel Air Impala for Chevy.

For Chevy, the 1958 Bel Air Impala became a highly desirable model featuring a one-year design that bridged the cap between the “Tri-5” 1955-57 designs and the extravagant, sharply tail-finned 1959 models.

The Pick of the Day is a beautiful and award-winning 1958 Chevrolet Impala hardtop finished in its original rare color of Cay Coral – just like rock ‘n roll star Buddy Holly’s famed 1958 Impala.

According to the Rochester, Minnesota, dealer advertising the Impala on ClassicCars.com, the original paint shows well with “normal wear and tear.”

Chevy adorned the 1958 models with dual headlamps, deeply sculpted rear fenders (much different than the tailfins from 1957), three taillights on each side and rear-fender scoops.

The dealer notes both the front windshield and rear window have been replaced.

The interior is finished in a matching Coral color to the exterior and features a two-spoke steering wheel, brushed aluminum trim and an AM radio with rear speakers.

“This Impala has been well-cared-for and maintained,” the dealer ads. “It runs and drives very well and all the gauges and lights work as they should, including the clock.”

Under the hood is a 348cid Tri-Power engine connected to a Powerglide 2-speed automatic transmission, and factory rated at 280 horsepower.

“Overall, this Impala is a nice solid car that would fit in and fair well at any local show or cruise night,” the dealer says. “It has been stored every winter in a heated garage and has had long-term ownership by an avid Impala collector.

Question of the Day: What is your favorite Chevrolet Impala?

Where Were You In ’62? The Cars of “American Graffiti”

Pick of the Day: 1958 Chevrolet Impala