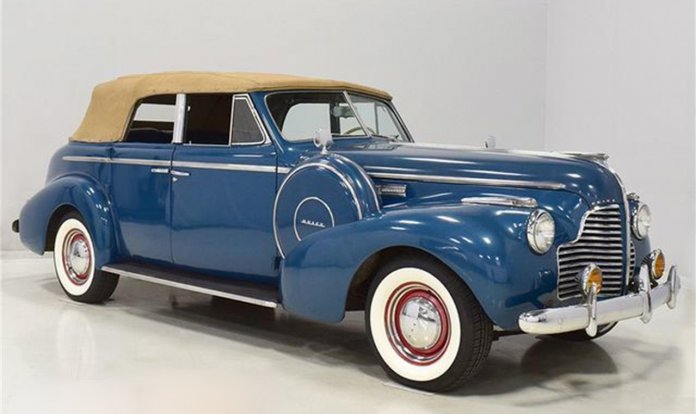 “Here’s looking at you, kid,” is the heartbreaking farewell that character Rick Blaine says to his love Ilsa Lund in the World War II-era film Casablanca.

While romantics swoon over the scene, car enthusiasts’ eyes may be focused elsewhere on the screen, where a 1940 Buick Century Phaeton is parked. The exact Buick seen in the film was sold at a Bonham’s auction in 2013 for $461,00.

And though the Pick of the Day, a 1940 Buick Century Phaeton, isn’t as famous as the Casablanca convertible, it still presents nicely after undergoing restoration in 1990.

1940 was the last year Buick produced the Phaeton 4-door convertible, in which the manufacturer built only 194 models.

“The Century is widely regarded as the fastest pre-war car you could buy, combining the 141-horsepower straight-8 with a mid-sized body, and the combination really works here,” says the Macedonia, Ohio, dealer advertising the car on ClassicCars.com.

According to the dealer, the body was resprayed during its 1990 restoration. The convertible’s original color was Bandalier Blue and the owner at the time used a finish that was as close to the original as they could get.

“That means the smallest hint of metallic in the finish to make it shine but not enough to make it look modern,” the dealer says.

The body is equipped with dual side mounts making it even rarer. It’s believed that only 124 units were made with these mounts.

The tan convertible top is noted to be pretty old but shows no rips or tears with the bows in “excellent condition.”

During the older restoration, the interior was also restored following the original patterns. It’s upholstered in blue leather with matching door panels and features a woodgrain dash. The factory gauges that are operational and the plastic steering wheel and various knobs have been recently restored.

“It’s spacious for four and comfortable for five, and anyone other than a starting forward in the NBA will find there’s plenty of room,” the dealer adds.

It’s noted the radio and clock are not operational due to the 12-volt electrical system conversion.

“The real reason you want a Century is under that long, pointed hood: Buick’s famous 320-cubic-inch ‘Dynaflash’ straight-8. With 141 horsepower, it was one of the most powerful engines in America in 1940 and it offers the kind of effortless torque that makes these cars perennial favorites.”

This Phaeton’s engine has been recently serviced and detailed, the dealer says, and is mated to a 3-speed manual transmission.

The odometer shows 74,744 miles, although the dealer doesn’t mention if those are original.

“It is not a show car by any means, but for tours and casual shows, it is ideal and will always attract more than its fair share of attention.”

Pick of the Day: 1981 Buick Regal, a street-legal NASCAR tribute