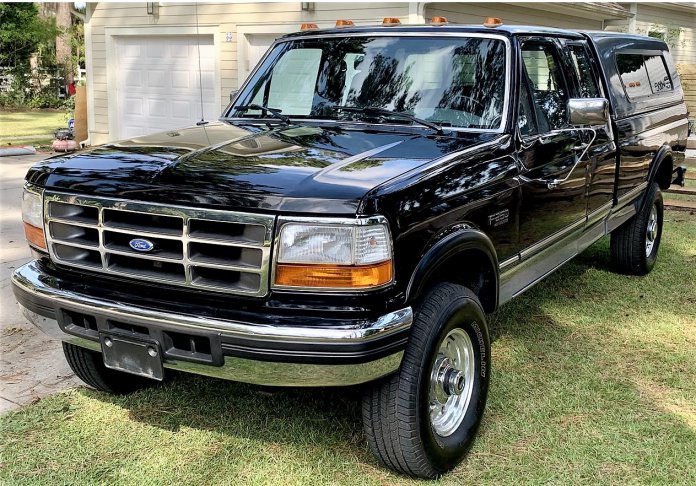 In the early 1990s, Ford marketed its newly launched ninth-generation F-Series pickup under the slogan, “The Best Never Rest.”  Ford had a hit on its hands with the F-Series being ranked as the best-selling vehicle in America, and nearly 30 years later, a good number of those trucks still haven’t gotten a rest.

The Pick of the Day is an all-original 1996 Ford F-250 4×4 XLT extended-cab pickup listed for sale on ClassicCars.com by a private seller in Bluffton, South Carolina.  The seller discusses the back-story on this pickup, described as being in excellent condition both inside and out.

“I’m the second owner of this truck, which I bought in 2009,” the seller says. “Engine has new hoses, thermostat, and serpentine belt and over the 12 years I’ve had the truck, it’s had no engine issues.”

The Michelin tires have fewer than 3,000 miles, the listing says, also noting recent work to the pickup’s suspension and braking system. The odometer reads 118,000 miles, which by industry standards is low for the model year.

The ninth-generation F-Series pickup truck debuted in 1992 with new bodywork but still riding on architecture that dated back to 1980. The hood line was lowered, the front fenders were rounded, and the fascia was modernized. Ford enthusiast groups classify this body style as the last of the “OBS,” or Old Body Style era, generally referring to anything prior to the redesigns starting around the late 1990s.

This black-and-silver three-quarter ton pickup has an extended-cab, long-bed configuration, and the cargo area is topped with a matching silver ARE-branded fiberglass shell. The seller asserts that the paint is all original, although some areas of the rear wheel wells received rust inhibitor when the aftermarket fender flares were installed. Detailed images of the rear quarters, rocker panels and door jambs show clean, straight and glossy body panels in the listing’s 50-photo gallery.

Under the hood is one of Ford’s last big-block motors, a 460cid (7.5-liter) V8 that was rated at 240 horsepower and geared toward a heavy-hauler utility lifestyle.  That tough powerplant is followed up with such work equipment as cab lights, manual locking hubs, a trailer brake control unit and a two-speed transfer case.

Now at 25 years old, this 1996 pickup has reached a stage where collector-level preservation is warranted, and the seller recognizes that.

“I love the truck and know it’s going to continue appreciating in value, but would like to free up some garage space,” the listing concludes.

The seller is asking $20,990 for this pickup, which easily has at least another 25 more years of service left in it.