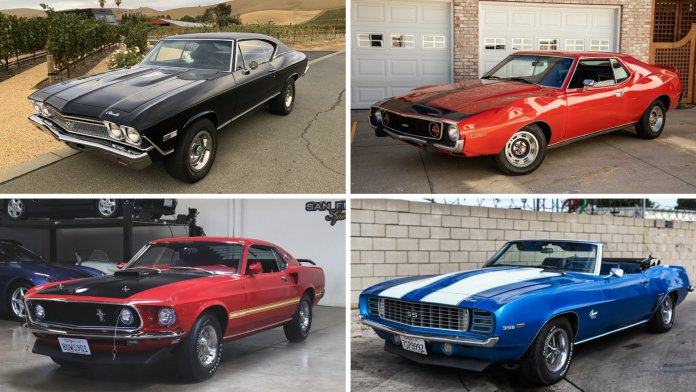 There’s no denying muscle cars are among the most popular segments in the collector car market, and with some of the most enthusiastic collectors.

And in just this last year, the market has seen a significant spike in growth. According to Hagerty, this rise was propelled in part by Hemi Mopars, specifically the Hemi Cuda convertibles that increased in value by 79 percent. GM’s 1970 Buick GS455 convertibles also were subject to a 20 percent spike in value, nearly matching the 52 percent jump by 1964 Impala SS 409 convertibles.

Muscle cars that had remained steady over the past few years also were subject to increased value —  the 1967-69 Chevrolet Camaro SS gained 14 percent on average and the 1968-67 Dodge Charger R/T values were up 28 percent.

“Such broad gains in value like this have not been seen since before the 2008 crash,” Hagerty’s Greg Ingold said. “All this despite previous fears of the market weakening as younger enthusiasts begin to take over the market.

“This goes to show that muscle cars are still popular and sought after as ever. What the future holds remains to be seen, but for the moment, this triumphant comeback is certainly going to be welcome news to muscle car owners everywhere.”

To celebrate this growth, AutoHunter, the online auction platform driven by ClassicCars.com launchs its first Muscle Car Week – a promotion in which 12 muscle cars take over the docket with auctions beginning Tuesday, October 26 and ending Tuesday, November 2.

Here are the 12 high-performing vehicles included in AutoHunter’s Muscle Car Week, with descriptions from the auction house:

This 1969 Chevrolet Corvette convertible has been with the seller for eight years and has been driven around 1,500 miles on a new drivetrain after a frame-off restoration in 2019.

Power comes from a ZZ427 big-block V8 crate engine paired with a rebuilt 4-speed manual transmission and features include aftermarket fuel injection, a new gas tank and many other replacement pieces throughout.

This 1974 AMC Javelin AMX coupe is finished in red with black hood stripes over a black vinyl interior equipped with bucket front seats, power steering, and a Sparkomatic AM/FM radio.

The interior is trimmed in black vinyl upholstery with silver accents and coordinating door panels, dash, carpeting, and floor mats. An AMX badge is affixed to the driver- and passenger-side door panels and the manual transmission’s shifter is floor-mounted.

Power comes from a 304cid V8, which the seller believes is original to the car and comes paired with a 3-speed manual transmission.

This 2010 Ford Mustang GT ROUSH Stage 3 is vehicle No. 36 of 103 produced for the model year, upgraded with options totaling over $30,000 including 20-inch cast chrome wheels, billet grilles, and Stage 3 graphics in addition to a suite of Roush-added performance and cosmetic content.

Power comes from a 4.6-liter supercharged V8 paired with a 5-speed manual transmission, with up-to-date maintenance on the 47,000-original-mile drivetrain.

The four-passenger interior is fitted with black, power-operated leather bucket front seats with gray suede inserts with gray contrast stitching, tied in with black door panels, dash, carpeting, and embroidered floor mats. Roush branding is present throughout the interior including a Stage 3 badge on the dash and Jack Roush signatures on the seat backs and dash.

This 1968 Chevrolet Chevelle SS two-door hardtop is a genuine SS 396 muscle car that was treated to a rebuild and refurbishment with work completed in early 2014.

The big-block 396cid V8 and Muncie M20 4-speed manual transmission are reportedly numbers-matching, and the powertrain has covered about 2,000 miles since receiving performance upgrades including a Holley carburetor, Hedman headers, and an Edelbrock intake manifold.

The all-black interior is reported to be in good original condition, though showing some age-related wear. The seats are covered in vinyl and are complemented in color-matching doors panels, dash, carpeting, and embroidered floor mats.

This 1969 Ford Mustang Mach 1 is presented as one of only five in its equipment configuration for that year, and having received a nut-and-bolt restoration that was completed in 2012 while retaining its numbers-matching 428cid Super Cobra Jet V8 paired with a close-ratio 4-speed manual transmission.

This 6,800-mile 2003 Dodge Viper SRT-10 roadster comes finished in red with a black fabric top over a black leather interior equipped with a push-button starter, air conditioning, a 6-disc CD changer, and power mirrors and windows.

Under the vented hood is an 8.3-liter V10 that sends its power to the road through a 6-speed manual transmission and the rear chrome wheels.

Inside, the car is furnished with black carpeting, black door panels, and black leather seats with gray inserts and Viper-embroidered backrests. Metallic trim is found on the door handles, pedals, and shifter surround. Equipment includes a red push-button starter, power windows and mirrors, air conditioning, an AM/FM radio with a 6-disc CD changer, and Alpine speakers.

This 1969 Chevrolet Camaro SS convertible is a turn-key muscle car restored approximately 20 years ago and powered by a replacement 396cid V8 paired with a 4-speed manual transmission. The seller has owned the vehicle for five years and added equipment including a new brake master cylinder, a rebuilt Edelbrock carburetor, and BFGoodrich tires.

The replacement interior is fitted with navy blue vinyl bucket seats which coordinate with the door panels, crack-free padded dash, and carpeting. Amenities include a tilt-adjustable steering wheel, a center console, woodgrain trim, a push-button radio, and a Hurst shift lever.

This 1970 Plymouth AAR ‘Cuda is one of the 2,724 AAR models produced during the model year and was featured in the show “Graveyard Carz.” Under previous ownership, it was taken to the Oregon-based shop featured in the program to be built up on a rolling chassis; a separate facility balanced and blueprinted the original, numbers-matching 340cid Six-Pack V8.

The current owner combined the rolling chassis, rebuilt engine, and rebuilt numbers-matching transmission, and finished restoring the car in 2016. It comes finished in yellow with a black hood, roof, and graphics over a black vinyl interior.

Equipment includes aftermarket electronic ignition, a replacement clutch, and BFGoodrich Radial T/A tires with less than 3,000 miles on them.

This 1967 Chevrolet Camaro RS/SS hardtop was subject to a two-year frame-off restoration completed in 2017 and encompassed a complete refurbishment of the drivetrain, suspension, braking system, body, and interior.

Work that was performed is documented in detailed photographs and service records, and this F-body Camaro is presented as a true RS/SS powered by a replacement, date-correct small block 350cid V8 paired with a rebuilt factory Muncie 4-speed manual transmission.

A fresh coat of Bolero Red was applied along with white striping around the hood and SS badging throughout. Brightwork includes new chrome mirrors, rocker panel moldings, window trim, and additional exterior accents in excellent condition.

A ground-up restoration was carried out and the car was repainted in Tuxedo Black with white stripes and equipped with a black vinyl interior.

The interior is reupholstered with black vinyl bench seating, color-matched to the door panels, dash, lap belts, carpeting, and floor mats. The dash is trimmed with an aluminum bezel and Malibu SS badging, while other amenities include a push-button radio and a Hurst shifter.

This 1971 Chevrolet Corvette Stingray is presented as a 93,000-original-mile example powered by a rebuilt numbers-matching Turbo Fire 350cid V8 paired with an overhauled 3-speed Turbo Hydra-Matic automatic transmission. This C3 was reportedly maintained under prior ownership for over 35 years and features body-color removable Targa roof panels, bright trim, and Rallye wheels.

The two-seat interior is fitted with original medium saddle vinyl (417) bucket seating, color-matched to the dash, center console, door panels, and carpeting. Amenities include an AM/FM radio, a telescoping steering wheel, and a carpeted cargo area.

To learn more about Muscle Car Week and to sign up to bid, visit AutoHunter.