And he picks a show car, driving-event car and a car just for fun that are up for auction 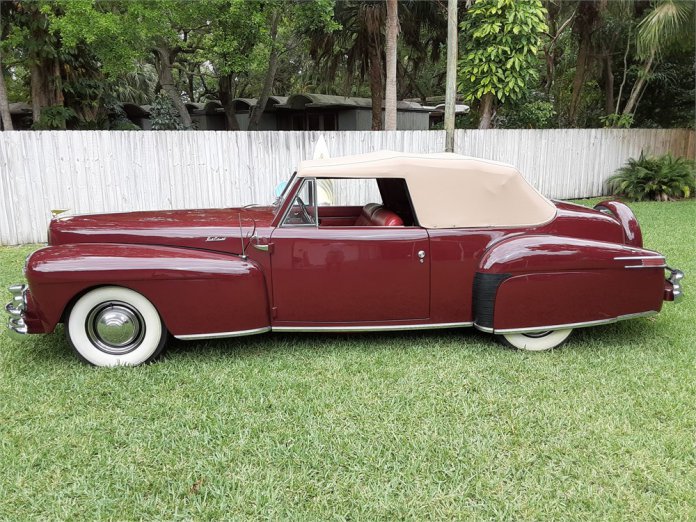 This week it is again my turn to choose some cars from our current AutoHunter auction site docket that I would most like to have in my garage.

I tried to choose cars that served different purposes, such as a show car, a driving-event car, and a car that just would be fun to take out on a Saturday morning drive.

So here is my list from this week’s great selection of AutoHunter, driven by ClassicCars.com, auction cars:

This stunning maroon Lincoln definitely fits into the show category as it has already been shown at an AACA national event last year where it won a first-place award as well as being shown at the Concours d’Elegance in Boca Raton.

That alone should speak to how nice this Lincoln is at present. It also is important to know the years the car won awards because that speaks to when the car was restored and to how well the car has held up in the meantime. Since this Lincoln won the AACA accolades just last year, and also was shown at Boca the same year, it tells me that this should be a very fine example.

These later Lincolns are often overshadowed by the earlier Continentals and as a result offer quite a bit of car for the money. Also, despite many other people’s opinion, I actually prefer the later style front-end treatment on these cars.

This is a great example of a fun event car, especially if that event is the Bandit Run, a gathering of classic Trans Am cars that recreates the Smokey and the Bandit run route from the film of the same name. Everyone I have ever spoken with that has attended this event had an amazing time, and this specific Trans Am, in the correct color scheme for the movie, just minus the often-leaky T-top option, would be a great car on this event.

That is even more the case when you factor in that this specific Trans Am is powered by a Chevrolet 5.3-liter LS V8 as opposed to the standard 1979 low-power V8 that it had out of the assembly plant.

Of course, an engine-swapped car will not have the same value as an investment, but to me the added fun of having some real horsepower under the hood more than makes up for that.

It is hard to beat an Aston Martin for sheer car enjoyment, especially as a car that you can take to a show, take to work, and then also take across the country. The DB9 is a truly awesome car and makes a statement wherever it arrives. You will be guaranteed front row parking at any fine hotel or restaurant valet line and the DB9 to me just equates with sheer driving pleasure in its finest form.

These are very special cars and the used prices for these cars, even at auction, when compared to their prices when new represent one of the best deals in the world for a late model exotic car.

In addition, the Aston Martin Owners Club (https://www.amoc.org/) holds some of the finest and most exclusive events in the world and this DB9 is your ticket to those at what will likely be a very nice price. If you buy this car be sure that you join the club and also be sure you let Aston Martin know that you are the new owner of this car through its website or via an Aston dealer as they tend to send invites to their owners for many interesting events.

And there’s much more to see on the AutoHunter website.

Question of the Day: What is your favorite Oldsmobile?