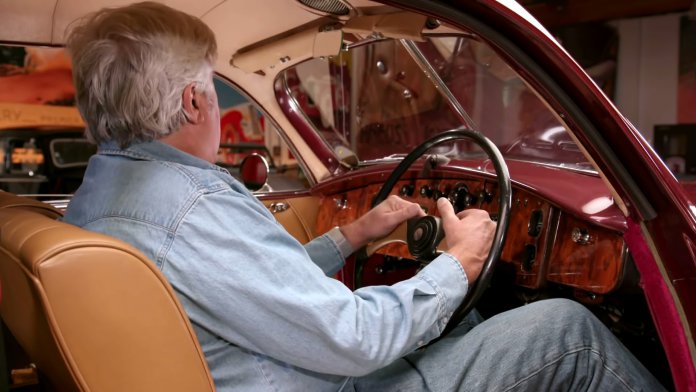 The U.K.’s Bristol Cars may not be on the tip of every wagging social media tongue these days, especially here in the U.S., but it has produced some remarkable cars over the years.

Case in point is a beautiful 1955 Bristol 403 that Jay Leno featured in the latest episode of his online series, “Jay Leno’s Garage.”

Bristol’s roots are in aviation and this transferred over to its earliest cars which featured lightweight construction and aerodynamic shapes. For example, the 403 skipped door handles to keep the body streamlined, and if you look inside the steering wheel and instrument panel looks similar to what you might find in a vintage aircraft’s cockpit.

You may also have noticed a familiar grille up front, albeit familiar to another brand. Yes, that’s a kidney-style grille similar to what you find on classic BMWs, and it reflects the fact the first Bristols used technology from some pre-war BMWs. The engine of the 403 was also derived from a BMW design. It’s a 2.0-liter inline-6 with pushrods making about 100 horsepower. That might not sound like much but the 403 only weighs about 2,700 pounds thanks to its lightweight construction.

Sadly, Bristol went bankrupt in 2011 after an impressive 65-year run. While there was an attempt to revive the brand with a new sports car called the Bullet that was unveiled in 2016, the company ran into trouble again and in March of this year was liquidated.

Visit past stories from Jay Leno’s Garage on ClassicCars.com