When Ken Smith acquired his beloved 1936 Delahaye 135, he added a lost piece of history to his collection 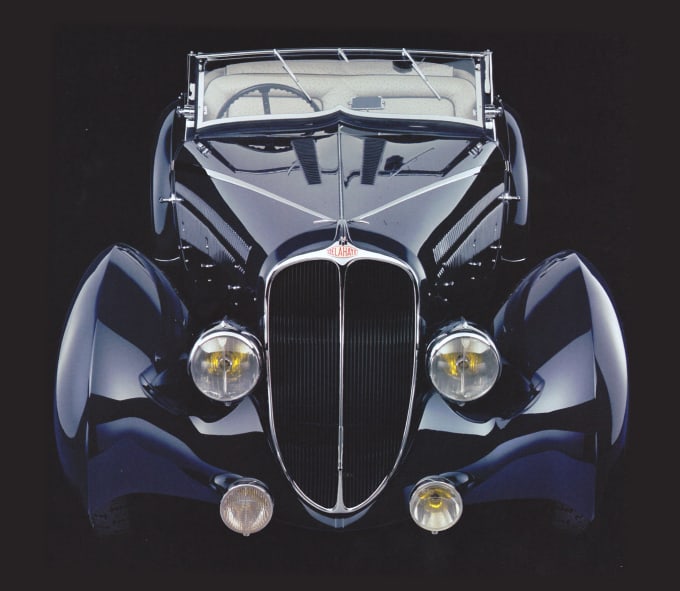 This stunning objet d’art 1936 Delahaye 135 Competition convertible, authenticated by Club Delahaye and Figoni records as the original body (Figoni #581) and chassis (Delahaye #46864), is a piece unique, one of the world’s most highly awarded cars and a consistent 100-point concours winner. It’s listed on ClassicCars.com and is looking for its next owner to marvel at its beauty.

The story starts with a 1963 Jaguar E-type Series 1 finished in gunmetal grey with a red leather interior. This is the car that ignited Ken Smith’s love for cars and inspired him to start collecting.

Smith grew up in Missouri, working part-time at his local newspaper and radio station. He bought his first car with the money he earned and began buying and selling vehicles, from Triumphs to Volkswagens and Ghias. His hobby continued as he attended journalism school at the University of Missouri and managed a large group of apartments, although the range of cars he was dealing grew to used Mercedes Benz and Rolls-Royces.

Later, Smith started a successful advertising agency that expanded throughout the Midwest and then to the West Coast. This, as he puts it, is “when the madness really developed.”

At one point, his collection contained 61 very diverse cars. Among his favorites were a 1929 Packard Dual Cowl Phaeton, a Cadillac Eldorado, Corvettes, Ferraris, Maseratis, a Lamborghini Countach and Espada, Porsches, and the last Aston Martin Lagonda, which he custom made with the factory.

Fully immersed in the collector car world, Smith and his wife, Ann, attended many concours. It was at one of these concurs that he first saw the 1936 Delahaye 135 Competition disappearing top convertible.

“My knees got weak, my jaw got slack and I fell in love,” he said. “I had never seen such a beautiful car.”

Smith quickly tracked down that car’s owner. It took months of begging and fancy dinners to try to convince the owner to sell the Delahaye. The ace in the hole involved Smith’s 1959 Cadillac Eldorado Biarritz convertible. The Delahaye’s owner wanted to impress one of his clients by picking him up at the airport in Smith’s ’59 Cadillac. So Smith proposed a trade — the Delahaye for the Eldorado. As you can imagine, the previous owner needed a little more convincing. Smith added a yellow Ferrari and some cash and the Delahaye was his.

Once the Delahaye was in his possession, Smith began to notice a few inconsistencies. He knew it was not the standard 1936 Delahaye 135s. He reached out to Club Delahaye to get more information and the story of the “Lost Talk of Paris” began to unfold.

In 1935, the wealthiest man in Paris, a Monsieur Wolf, sought a car he could drive on the streets of Paris but also could take on the racetrack and win at concours events. So he challenged his good friend and famous coachbuilder, Joseph Figoni, “to design a car that would combine the new streamlined design with the fast and reliable Delahaye Competition chassis and 3.5-liter, 120-horsepower 6-cylinder engine with its trio of matching  Solex 40 PAI carburetors,” Smith mentioned in a write-up about his Delahaye.

Accepting Wolf’s challenge, Figoni designed a piece unique car finished in Bleu Foncé paint. Smith noted that the vehicle features the “Delahaye identity in the grille and hood with generous teardrop fenders flanking Marchal headlights tucked tightly to the grille and a pair of Marchal fog lights fitted low below them.”

The rear echoes the fender and features skirts covering the back wheels. There are unique chrome accents “sweeping back from the peak of the grill, down across the doors then filling the rear fender joint and small chrome spline down the rear deck,” wrote Smith.

The most noteworthy and famous features of the car are the Figoni et Falaschi patented (795.769) streamlined disappearing convertible top that folds into the body of the car and the foldable windshield.

When the car was finished and rolled onto the streets, it was quickly named the “Talk of Paris,” for obvious reasons. Wolf, the proud owner, had the raced car in many events and allowed Figoni to drive and display the vehicle at multiple tours and shows.

Wolf’s poor eyesight made it unsafe for him to race the car. He was often described as having coke-bottle glasses. So he hired French racing team made of Guy Mairesse and Paul Vallee to drive the Delahaye in numerous racing events.

After an enjoyable and award-winning time with the car, Wolf sold the Delahaye in 1951 to another Parsian, Jacques Persin, director general of Facel Cars. Shortly after, Persin sold the car to an employee of his, Peter Gagola.

There are two versions of the story. Either Gagola brought the car to America, or it was imported to Pittsburgh by the next owner, Earle M. Heath, a doctor. But either way, when the car was brought to the States, it was not registered correctly. This mishap caused the next few owners not to know the full story of the vehicle. While it was still known as a 1936 Delahaye 135, the owners were unaware of its historical significance as Figoni’s first streamlined competition convertible.

That was until Ken Smith became the owner in 2003 and brought it to Club Delahaye’s attention. Smith began to send Club Delahaye numbers found underneath the car and on the engine block.

“As they say all roads lead to Rome, numbers lead to a very positive identification, which was that this was the ‘Lost Talk of Paris’ car,” said Smith.

Overjoyed at the discovery, Club Delahaye invited the Smiths to France to talk about the car.

After they arrived, they attended a significant meeting just south of Paris with the Club Delahaye officers and special guest, Claude Figoni – Joseph Figoni’s son. At this meeting, Claude Figoni shared that his father agonized over the smallest details like the upturned chrome in the windshield’s center base, a design carried throughout the car. He also gave Smith a copy of the original build sheet.

Smith began showing the car all over the United States. In the 17 years they’ve owned the vehicle, the car has won First in Class, Best of Show, Most Elegant, Best Paint, Best Pre-War, People’s Choice, and has scored nothing less than a perfect 100-points at every Grand Classic.

“The car checks all the boxes for beauty and timeless elegance,” Smith said.

Fast forward and Smith still adores his Delahaye — or “Dela” his nickname for the car. He’s gradually sold his entire collection but has saved the best for last so he can enjoy every last minute.

When asked where he would like to see his Delahaye go, he said he would love for the car to have a chance to be shown at the finest concours or rally events throughout Europe, and for the owner to let him visit his Delahaye once in a while.

So what’s his plan after he parts with Dela? To ride off into the sunset with his wife, Ann, in their VW Beetle Convertibles.