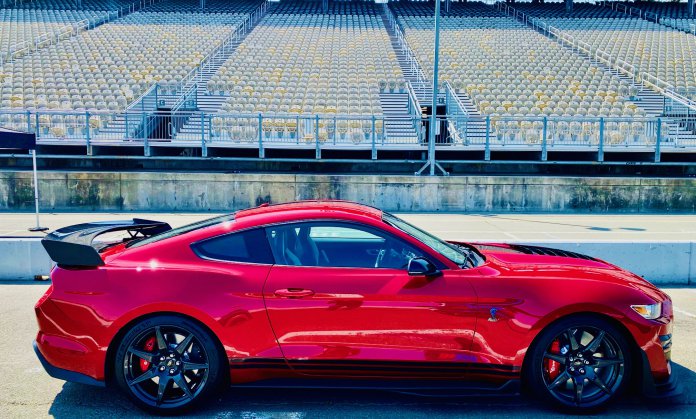 G-forces. Some of us like them. The acceleration and loops of a rollercoaster, the banking and turbulence of an airplane, or taking to the road course and dragstrip at Sonoma Raceway in the new Ford Shelby Mustang GT500. They will turn your stomach, pucker your backside – or tickle your fancy.

In my case, I was tickled to no end. The GT500, versatile enough to get groceries or tear up the track, was quite thrilling over two days in wine country. Ford invited several media and club members, as well as some dealers, to come experience the car over a three-day period. What an experience it was! Happiness is a warm V8…

Needless to say, I got to feel some genuine g-forces with my hands on the wheel. Specifically, in Track Pack trim… Lighter than the run-of-the-mill Mustang GTs, at 4,200 pounds, with 20-inch carbon-fiber wheels; gigantic six piston, vented Brembo brakes; sticky Michelin Pilot Cup Sport 2 tires; an intuitive and super-fast dual-clutch 7-speed Tremec transmission; and most of all, 760 ponies making insane power from a 5.2L Supercharged Cross Plane Crank V8.

Plus, it is simply such an attractive car, beautiful inside and out. The GT500 is muscular, flared and bulging in all the right places. The added trim, including rear damper and front splitter, highlight the look while adding genuine useful aero to the car. There was a variety of colors and stripes amongst the 20-plus cars at the demo.  You know that feeling like being a kid in a candy store?

For many of us who have been around motorsports for more years than we like to admit, Sonoma Raceway will always be “Sears Point.” Named originally for the land where the track sits, 30 miles north of San Francisco, it has played host to many top-tier racing series since its construction in 1968, such as the Can-Am, Formula 5000 and Trans-Am series, and is now a popular stop for IndyCar, NASCAR and the NHRA.

The first thing we did was go over to the drag strip, home of the NHRA Sonoma Nationals. We certainly weren’t going to make a pass ala John Force, but we were going to get a feel for the launch control and the brute horsepower that the GT500 lays down. It did not disappoint.

Times in the low 10s – from the showroom floor – are pretty darned impressive. My pass (which did not have the Christmas tree implemented) was approximately 12 seconds at 130 mph – effortlessly.

In this hurried quarter-mile run, the car really did do all the work. All I had to do was put the car in dragstrip mode, engage launch control (set to kick at 1,600 rpm), put my left foot on the brake, bury the throttle with my right, release the brake and hang on. The dual-clutch Tremec seven-speed shifted at the most efficient points (chirping the Michelins through two gear changes) and the driver aids kept the car relatively straight.

The 3.6 seconds to 60 mph with a solid power band all the way to 130 at the finish was kind of like taking off on the Xelerator rollercoaster at Knott’s Berry Farm.

Then it was time to hit the road circuit, effectively more my wheelhouse than the strip. We ran a modified version of the Sears Point circuit, which eliminated the carousel and ran us down the “chute” between turns 4 and 7, where we rejoined the circuit. Needless to say, 160 feet of elevation change, the high speed run up the front straight through turns 1 and 2 and the zig-zag through 8-9-10 with tight hairpin at 11 gave plenty of great impressions of the Shelby’s race-worthiness.

Once again, the Tremec seven-speed shifted faster than I could think. As a traditionalist, I love  manuals, double clutching and heel-toe shifting, but setting the car to track mode made for much less effort. There are paddles on the wheel, but for most, they could be considered ornamental. The big brakes allowed for heavy, stable, late-braking, while the trans put the car in the perfect gear each time for momentum.

Putting the power down was a thrill for sure. On the second day, which had us on a damp track, coming out of the hairpin towards turn 12 and the front straight, I braked a little later and accelerated earlier. The car snapped a bit from the oversteer, which was quickly caught by the driver – or was it those driver aids again?

The steering does feel a little light. The biggest shortcoming, which frankly wasn’t that big a deal, was feedback from the wheel. There was enough, but between my butt in the seat and my hands on the wheel, I was left wanting – slightly.

The handling was pure magic, thanks in part to magnetorheological dampers. These shocks are magnetic fluid-filled and controlled by an electromagnet that varies pressure signaled by sensors on the car. It’s almost like having the banned active suspension from a Williams FW14B Formula One car. Considering the car still weighs in at 4,200 pounds, and with the big horsepower, the balance came off as stellar – think Porsche – as the car turned-in, apexed and exited the corners with beautiful stability. Body roll was minimal, without feeling too stiff.

The level of comfort, driving position and support provided by the OEM Recaro seat was perfect. A couple weeks ago as I drove the Original Venice Crew’s 1966 GT350R and commented that I had a great deal of respect for the guys that drove them in 250-500 mile races, the GT500 in my hands on this day was a literal 54-year leap into the future. My mother could do a 500-mile race in this car and probably not break a sweat. Imagine what Ken Miles could have done with such a beast…

To the folks at Ford and Shelby: Pat yourselves on the back. You have just built the ultimate Pony Car.