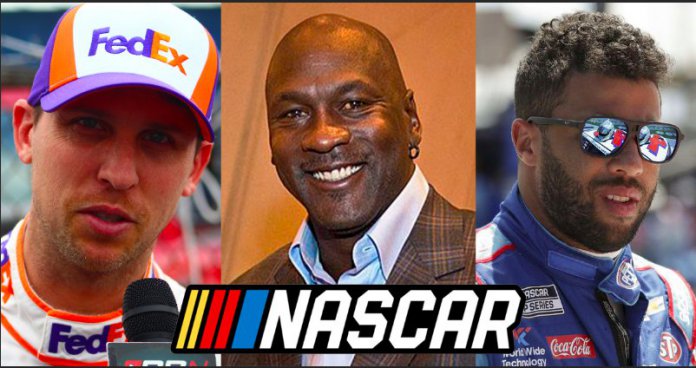 For the first time, since Wendell Scott drove and fielded his independent team from 1961-1973, Michael Jordan will become a majority owner of color in NASCAR. The team is co-owned by long-time friend, three-time Daytona 500 winner and Joe Gibbs Racing star Denny Hamlin. The car will be driven by Bubba Wallace for the 2021 season.

“Historically, NASCAR has struggled with diversity, and there have been few Black owners,” Jordan said in his statement. “The timing seemed perfect, as NASCAR is evolving and embracing social change more and more.”

Michael Jordan grew up in NASCAR country and was said to have attended many races with his parents as a child. From there, he has been a lifelong fan of the racing series. Hamlin, known as the Hornets’ version of Jack Nicholson, can be found sitting courtside at most of the Charlotte NBA franchise games.

“Eleven years ago, I met Michael Jordan at a then-Charlotte Bobcats game, and we became fast friends,” Hamlin wrote. “Not long after, I joined Jordan Brand as their first NASCAR athlete. Our friendship has grown over the years, and now we are ready to take it to the next level.”

Brad Daugherty, who played for the Cleveland Cavaliers in the NBA, also has had a long friendship with Jordan, going back to the University of North Carolina, Chapel Hill. Daugherty has an ownership interest in JTG Daugherty Racing in the Cup series and previously had ownership in a Truck Series team, he is said to have been very persuasive in Jordan’s decision for this NASCAR venture.

Bubba Wallace, NASCAR’s only major Black driver, has made 105 Cup starts in four seasons without a win. In the Truck Series, Wallace posted six victories.

“Bubba has shown tremendous improvement since joining the Cup Series, and we believe he’s ready to take his career to a higher level,” Hamlin wrote. “He deserves the opportunity to compete for race wins, and our team will make sure he has the resources to do just that.”

Jordan received a warm welcome from the top-tier racing series, with hopes that he will raise the bar for competition and NASCAR’s momentum.As an advisor to DraftKings, one will wonder too if this might raise the sports betting profile of the racing series.

“Growing up in North Carolina, my parents would take my brothers, sisters and me to races, and I’ve been a NASCAR fan my whole life,” Jordan wrote. “The opportunity to own my own race team in partnership with my friend, Denny Hamlin, and to have Bubba Wallace driving for us is very exciting for me.”