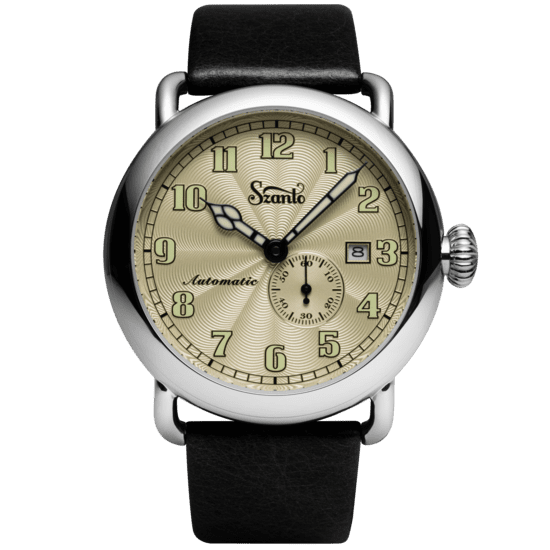 As much as I love vintage cars and motorcycles, vintage wristwatches strike my mechanical fancy, too, and I have built up quite a collection over the years. One of the particular styles I admire the most is the WWI Officer’s watch. It represents what is effectively the first mass-produced wristwatch – and introduced men to the wristwatch “fad.”

The new Szanto Automatic affordably captures that spirit in both style and accurate mechanicals.

Men did not really wear wristwatches until the mid-1910s. It was considered an effeminate jewelry fad – and not expected to last. There were great watchmakers, and wristwatches themselves were introduced in the mid-1800s. However, men generally carried pocket watches. They were elegant and, with a chain, made a nice accessory to a suit and tie. In some cases, they still do.

It was soldiers and aviators in World War I who began strapping pocket watches to their wrists. Keeping a close eye on the time was important for an aviator or soldier, ensuring that missions were carried out as planned. WWI was the first major war to incorporate radio transmissions in combat, meaning accurate timing was paramount. Having quick access to the time was vital.

By the halfway point of the war, in 1916, the British Army began issuing wristwatches to soldiers and aviators. The New York Times published an article suggesting the wristwatch was more than just a passing fad. As our soldiers, their watches proved valuable and important. At that moment in history, the pocket watch fell out of fashion and the wristwatch became the standard means of time-keeping for men and women alike.

It was the officer’s watch that crossed the chasm. Basic timekeepers with easy to read hands and numbers. Like cars, many watches have a story to tell. Certainly, what impressed me immediately about the Szanto was the look. While not large and loud, like many of the 50-60mm watches today (and yes, I have a few of those), the Szanto is simple yet elegant.

The 43mm chrome stainless case is understated with English luminescent numerals sitting on a hammered metal face. A small swift hand rotates on its own axis as a separate dial. A date complication and a basic leather band complete the watch. The luminescent numbers do not fade quickly as I have checked the time in the middle of the night with complete clarity.

The accuracy is decent, from a Japanese automatic movement, at about a minute fast per week. But most impressively is the winding. I have taken the watch off, eliminating its perpetual winding, for as many as two days – only to find it chugging along and keeping time as I strap it back on. It is an impressive and attractive timepiece with a Gatsby look.

According to the Szanto website, “A few years ago, a veteran watchmaker was struck by the beauty and simplicity of military watches from nearly 100 years back, and set out to create a modern watch with the same classic vintage appeal.” The company is based in California.

In the end, would I trade my Submariner or GMT for this piece? No. However, at a MSRP of $375 it shows up well and I would proudly wear it to any concours d’elegance or the Goodwood Revival to match my vintage clothing.

You can check out the full line of Szanto Watches at szantotime.com.