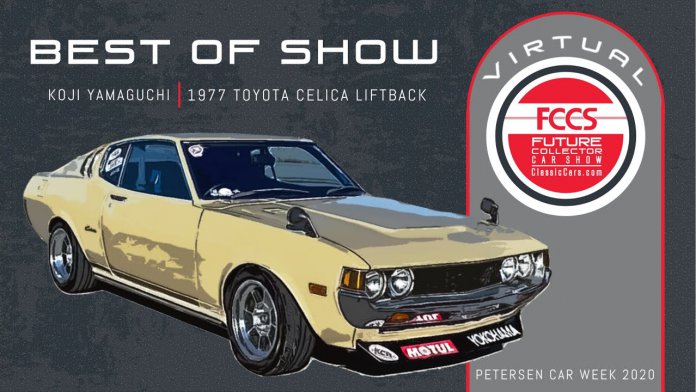 The Future Collector Car Show was founded on the mission to drive the next generation of car collectors by revising the typical concours entry formula in lieu of a more modern approach. Accepting nearly all years, makes, models and conditions, the FCCS includes all original and highly modified cars, modern grand tourers, supercars, and other uniquely desirable vehicles.

And the winner is… Best of Show goes to a right-hand drive 1977 Toyota Celica Liftback owned by Koji Yamaguchi.

Partnering with the Petersen Automotive Museum and the digital Petersen Car Week, the Virtual Future Collector Car Show received dozens of applicants from all over the world. The 45-minute video special, which premiered live on August 13, featured 18 hand-selected future collector cars.

The winning car  is a true JDM legend, having been rescued from a Japanese junkyard in 1989 by Yamaguchi.

“Yamaguchi built it like it was built by someone who owned it in the ‘70s,” said head judge Andy Reid. “This Celica really encompasses what the future of the collector hobby will be.”

Imported to the United States when Yamaguchi was a young man, the Celica received a complete, ground-up, cosmetic and mechanical restoration over the last 30 years with the goal of keeping it as stock as possible.

The 1,968cc 18RG DOHC inline-4-cylinder engine produces a small but spirited 140 horsepower at 6,400 rpm and is mated to a correct Toyota P51 5-speed manual transmission. The custom-fabricated Danstoy Performance headers feed a 2.5-inch stainless pipe to a Magnaflow muffler and together  produces a satisfying growl.

The black vinyl interior is immaculate and maintains a mostly original look apart from a few aftermarket pieces, including a Nardi Classic steering wheel, custom pedals, and a modern sound system.

Repainted in its original sandy beige, the car is complimented by Hayashi Racing wheels wrapped with Yokohama S-Drive High Performance Tires. The front end is held up by a custom coilover kit crafted by TSR Fabrication with stopping power brought on by a big-brake rotor kit by Techno Toy Tuning.

Competition was tough, and the variety was impressive from the submissions from all over the world.   Make sure to stay tuned for the 2021 Future Collector Car Show that will be kicking off Arizona Auction Week.