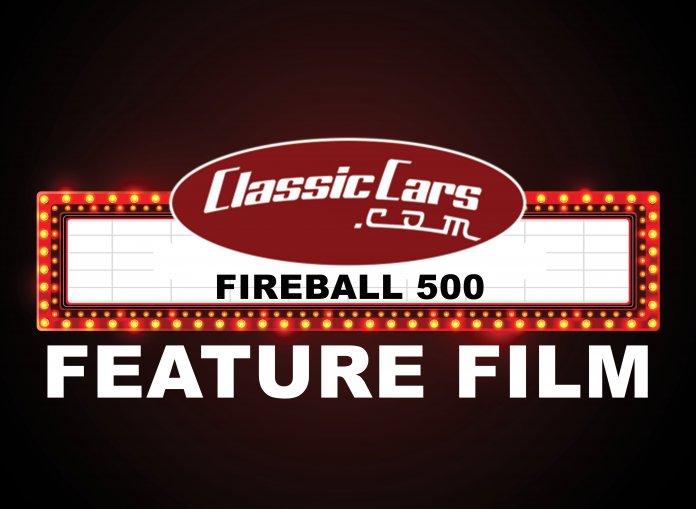 Fireball 500 features Frankie Avalon, Fabian and Annette Funicello made many “Beach Party-genre” movies in the mid-to-late-1960s. With the popularity of fast cars and racing during this period, it was a topic that fit well. Even Elvis would do Speedway with Nancy Sinatra in 1968.

This film is a nostalgic look back to a more innocent time. Avalon plays Dave “Fireball” Owens, a moonshine runner and stock car racer. It makes one wonder if his character’s name was a shout out combination of “Fireball” Roberts, who was killed in 1964 at Charlotte and “King of the Modifieds,” “Cotton” Owens? Certainly, they have it right when it comes to many of that era’s racers and their day (more like night) jobs…

Avalon also cruises through the movie, towing his race car in a George Barris-built 1966 Plymouth Barracuda. At one point the car is called a “Batmobile,” to which Avalon replies, “This one was built first.”

The plot of the movie from Wikipedia: Dave “Fireball” Owens “goes to race in Spartanburg, South Carolina, where he intends on competing against local champ Sonny Leander Fox. Dave beats Leander in a race, impressing the latter’s girlfriend, Jane, and the wealthy Martha Brian.”

“Martha persuades Dave to drive in a cross country night race, not telling him he is actually smuggling moonshine. She and her partner, Charlie Bigg, are pleased with Dave’s results. Leander, who runs his own still and smuggling operation, is impressed with Dave’s success, but this does not change the fact that he wants to beat Dave on the track, even challenging him to a dangerous figure-8 race.”

“Agents from the IRS threaten to send Dave to six months in jail unless he helps them bust the local moonshine ring.”

There are a couple of notables beyond singer/actors Avalon and Fabian. My mother remembers Annette Funicello as a Mouseketeer, whereas I remember her as the “Skippy Peanut Butter lady.”

Anyone who has ever watched a Los Angeles Dodger game in their life might also recognize the narrator in the animated introduction of the movie as none other than long-time voice of the Dodgers, Vin Scully!