Thermos took a WWII concept and applied it to making everything faster. Part one of the high horsepower saga of NOS 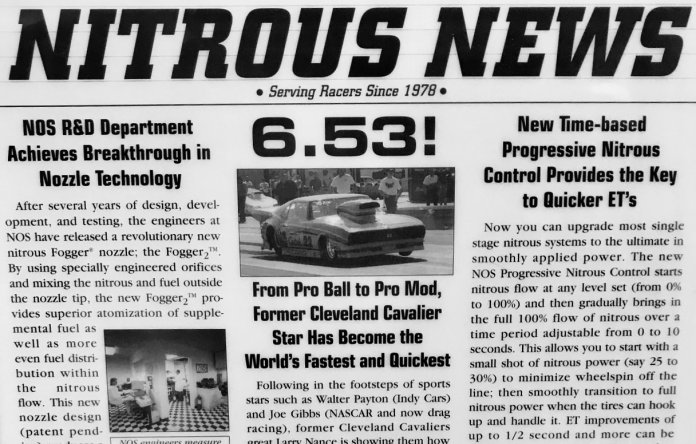 Nitrous Oxide (N2O), has been a performance enhancer to piston-driven engines going all the way back to World War II. The guy behind the widespread use of Nitrous Oxide in dragsters and street racers with NOS is Mike Thermos. While Mike isn’t a household name, in the car world, his contribution is revered.

Consider the scene in the very first The Fast and the Furious where we are introduced to Brian O’Connor, who working as an undercover cop out of a speed shop. The youngster needs an add-on edge in street racing. “I need NOS!”

Before 1978, it was a well-kept secret to a few racers in NASCAR and “doorslammer” dragsters – but also had the potential to melt an engine if not used properly. Thermos and partner Dale Vaznaian made it efficient, pretty and effective, resulting in great success and widespread use.

“I wish I was younger… I would do it again,” declares the 76-year-old pioneer.

He and his partner sold NOS to Holley in 1999. In the agreement, there was a five year no-compete clause. Neddless to say, Thermos is back in the business – albeit at a slightly smaller scale — with Nitrous Supply, still making cars faster.

He tells us his story…

“Well, nitrous oxide was, was kind of an underground trick for some of the guys. They had learned that you can squirt a little bit in, and it picked the car up.  In NASCAR, they used the stuff for many years.”

“It came from the Germans actually, during World War II, where they’d put it in the planes that would go high altitude, they needed oxygen. But then the jet came in and the jet took over and all the technology kind of just fell by the wayside for propeller type of plane. The Americans did it too. I read all that history on it. At the time, I had a tune-up shop and a funny car. I had been through the whole gamut and it was eating me out of house and home.”

Near the end of his own racing career, Thermos found enlightenment.

“My wife was bitching at me cause all her money was going in for the damn car. It’s like having a bad woman (laughs). So, there was three of us guys in the car and racing. The funny car’s costs were escalating. It was getting to be that if you didn’t have an extra million bucks, you’re not going to compete. Prudhomme and MacEwan, they got Mattel. While you couldn’t touch them, they got all the trick stuff and you couldn’t compete at all. I got out of the race scene, it took me about six months to get it out of the blood. It’s like you’re an alcoholic. Finally one day you wake up and you go that’s the most stupidest thing in the world that I tried to beat these guys. You’re not gonna beat them.”

“I was about 35 years old and I started to see it all settle down. I had a little tune-up shop doing tune-ups and brakes. I had a couple hundred bucks in my pocket all the time. I taught a little auto shop class at night school at a local college. It was a token deal, but I didn’t like it. It was a pain in the ass to go over there and it was just that school board thing. The systems you had to go through. And I was too much of a rebel, to pay attention and salute everybody.”

“Then I read a story about this guy near where I lived in Torrance (California) was doing these nitrogen kits, underground kind of. He’d take old CO2 bottles and he’d cobble them up and buy junk yard stuff and he’d build these kits. I went over there and talked to them. I had a pretty good education on fuels from the funny cars and stuff. I knew that fuel made horsepower.”

“I bought a kit. It cost about 350 bucks. I put it on my Corvette, and I drove it. It kinda worked, but then it would shut off and it wouldn’t work. The bottle pressure would get warm, the solenoid wouldn’t open and stuff like that. So, I started figuring it out. I wrapped more wires around it. Well, it worked, and I thought, that stuff’s simple. It’s just a couple holes there and a  solenoid and a bottle and steal fuel off the fuel rail. What’s to these? You could build this thing in a hardware store and that’s what it is.”

So began an enlightened idea.

“I had a friend of mine (Dale Vaznaian) who was hanging around the shop — he was a vagabond too. He’d sell used cars and stuff and race cars. And I said, Dale, you got any money? He lived up in Palos Verdes, so I figured he had a few bucks. He would always hang around my shop and use my hoists to change his oil and everything and we became buddies. He had a little Flathead dragster and I’d go out with him and help him on his dragster.

“I proposed we build these things. Let’s just go down and get that tubing and drill some holes in it and find out the solenoid. This is a hot little trick. And, he says, sure, I’ve got a 1000 bucks. So, I said, okay, I’ll get 1000 bucks, throw it in the bank and shake hands.”

“We had a buddy that painted the race cars. I asked if he can make us a logo? And he drew N-O-E  for Nitrous Oxide Engineering. I said, well, we’re not engineers so do something else. So he drew N-O-S like that. I said, yeah, that kind of looks like the symbol for nitrous oxide. We became Nitrous Oxide Systems.”

So began the legend.

“We’d skin pack the kit. A lot of the guys were starting to do this stuff out of the back of their garage. But we painted ours, had our bottles painted really nice, put chrome valves on them — really gingerbread everything up.”

The kit was advertised in the back of car magazines and began selling a little.

“Then I went to Hot Rod magazine and dropped one off. The editor came out and said ‘Wow! What a nice piece that is. I just did a story though, so I can’t do a story on you guys.’ But anyway, I got acquainted with the guy, C J Baker a real likable guy.”

In the process, C J Baker would get Mike and Dale involved in a pyramid scheme that was going around the Petersen publishing offices amongst the employees – very popular in the 1970s with the promise of growing your money by getting others to invest as well – now outlawed. The duo lost about $5000, their entire investment in the scheme.

“Well, C J Baker calls me and he says, ‘Oh, I’m so sorry. You know, I roped you into this thing.’ He probably thought we were going to go to Mr. Peterson and rat him out, saying ‘this guy sucked us in and we want our money back and all this…’ I told him, ‘Hey, we’re big boys. You know, don’t worry about it.”

“We start building kits and away we go. It was then we started really believing in the value of advertising and promotion. It was the kind of product that shoves you in the back seat.”

Promotion then leads to sponsorship – and right back into racing.

Next week Mike tells the story of how NOS hit the mainstream and how a rag-tag grease monkey became a $multi-million business.

Question of the Day: What do you think is the most attractive taillight from the 1950s?

The ClassicCars.com Journal is heading to Monterey Car Week