Marilyn Fox: The first lady of the Can-Am

In a testosterone-driven sport, this driver’s wife earned a lot of credibility 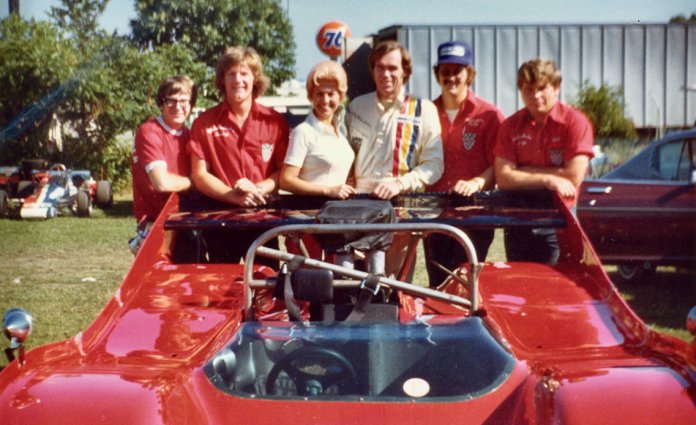 The Canadian-American Challenge Cup Series and its unlimited sports racing cars shook the competitive motorsports world from 1966 to 1974. These ground-pounders are still treated with awe and reverence today. In an age in which the cars were the stars, many of the personalities from that incredible time of Can-Am racing have faded.

Nonetheless, never to be forgotten in racing circles is Marilyn Fox Halder. People from that era will tell you she was smart, beautiful and charismatic. A lucky German ex-pat racer named Lothar Motschenbacher, an independent Can-Am team owner and driver, called Marilyn his team manager and wife, this in an era when women were either trophies, stayed home, or were given a clipboard and a stopwatch and put to work on timing and scoring.

Marilyn’s introduction to racing came through her career as a dancer. She had been dancing and entertaining going back to her early childhood. She was doing commercials by day and dancing at the Millionaire’s Club, a private drinking establishment with live entertainment on La Cienega Boulevard in the evenings. The building itself would become ‘OSKO’s’ and was Los Angeles’ most popular nightclub club during the disco-era.

It was there she met Peter and Harry Rothschild. They owned the Powerine Oil Co., a petroleum refinery business founded by their father in Southern California. They were looking to provide high-octane fuel to the racing clubs and tracks and hired Marilyn as a promotional model and “race queen” to represent the Powerine Brand at the races.

“It sounded like fun and I love cars!” she remembers.

That love of cars may never have fully developed itself but for that chance meeting and the new gig.

“I always liked the techie side of how things work,” she explained. “My dad always had Fords, but then he bought a Packard. Dark Blue and it was gorgeous!”

Off to the races Marilyn went.

“At first, I didn’t know where I was going, so I had a chaperone that would take me around.”

Her first race was at Riverside. She also appeared at gas station grand openings. It was at one of these races, a year and a half into her stint, that a soft-spoken German approached her during a race weekend at Santa Barbara.

Lothar Motsenbacher arrived in Southern California from Germany, where he had been an apprentice Mercedes-Benz factory mechanic. He opened his own Mercedes repair shop off Ventura Boulevard and took an interest in racing. By 1962, he had bought himself an ex-Ken Miles Lotus 22 Formula Junior. In 1963 and 1964, he won 32 races, 13 of them consecutively.

Motsenbacher moved up to a Cobra, and then to a King Cobra. From there, he would enter the Can-Am series in its inaugural year, 1966.

He had known Marilyn from the numerous award ceremonies where he was getting trophies, but it was on this particular occasion he offered Marilyn a ride back to Los Angeles. The rest, they say, is history.

She took a deep interest in the cars that he raced. Being an ace wrench, Motsenbacher built his own engines and had parts neatly organized during builds. Marilyn got quite the education, identifying the parts and watching how they all went together.

In the Can-Am Series, Motsenbacher raced his first season in a McLaren M1B backed by actor Dan Blocker – known to millions of fans as Hoss Cartwright on the hit TV show Bonanza. John Surtees in a Lola T70 would take the very first championship before McLaren would dominate the next five years.

Marilyn remembers that Lothar and Bruce McLaren were quite close. “They both had engineering minds and related easily to each other.”

Motsenbacher would buy all his privateer race cars directly from McLaren. Motsenbacher’s best championship result came in an M8B in 1970, when he was runner-up to Denny Hulme. Sadly, Bruce McLaren was killed a testing crash at Goodwood before that season began.

It was a dangerous era of racing. Lives were taken regularly. Marilyn had worked in public relations for Carroll Shelby for a bit when Dave MacDonald was driving – and winning with — the King Cobra. In 1964, MacDonald was killed at Indianapolis. Being part of essentially a traveling road show, deep relationships were formed. “I got to know everybody, and they became my family. There was deep camaraderie.”

An old tradition was regaled by Marilyn. There was a time when the winner would get a kiss from the race queen as they hoisted their trophy.

“I received a wonderful letter from Sherry MacDonald (Dave MacDonald’s widow),” she recalled. “Back in the days when I was a race queen, (Sherry) said ‘the reason I loved you so much was that you would make the wives kiss (the husband winner) before you did.”

But what was the reaction when a driver was killed? “It’s a mindset,” she related. “I think all the drivers have it and don’t even know they do it. They put it behind them and say, ‘I am doing everything right and I’m going to be fine.’ The mind takes over and erases doubt. If you did have a doubt, you couldn’t race.”

As the racing team grew, Marilyn found herself in a management role. She handled everything from logistics to paperwork. “The team would stay on the road and after a race, Lothar would send the engine home to be rebuilt. He would fly back and rebuild the engines himself – we were an independent team, after all. Most times I would stay with the car and get the next race all organized with hotels, paperwork, payroll – even driving the truck!”

Oh, and she also did timing and scoring.

Motsenbacher retired from racing in 1973 but continued to build race cars and do Mercedes restorations. They divorced, but have remained good friends. Marilyn remarried to Rear Admiral (ret.) Bob Halder, a Navy doctor.

She has been very involved in Can-Am reunion events and produced a number of films called Then and Now: Can-Am Memories. She also continues to perform as a tap dancer.

It is charming to hear Marilyn talk about all her old chums from that gilded era of motorsport, a literal who’s-who that most of us can only read about in books. She remembers their quirks, their senses of humor, and their friendships.

She continues to keep up with many old friends from the era, as she puts it, “to tell stories that only we can remember.”

The Journal Podcast: Pete Lyons, Shadow and beyond