The man himself, surrounded by controversy, in a candid and intimate conversation 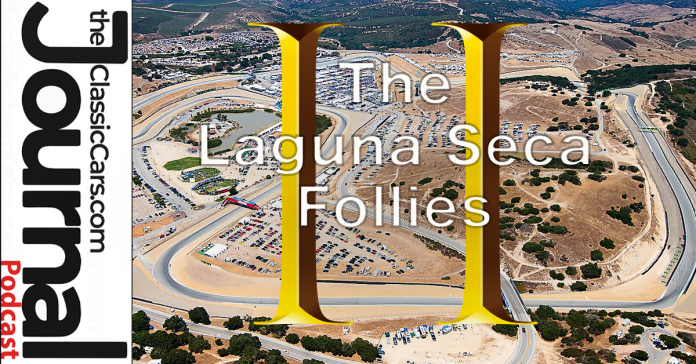 Earlier this month, we presented everything we had learned in regard to the management contract to the Laguna Seca Raceway awarded to A & D Narigi Consulting in November 2019. The response was much speculation and surprise from readers and much candor from insiders.

Conversations with Chris Pook, the Long Beach Grand Prix founder, who also bid on the business; Tim McGrane, the ousted CEO of the track; along with a number of industry insiders who weighed in. But to really get to the heart of the matter, John Narigi was one who needed to be heard.

One strong voice was Laguna Seca’s vice president of marketing, Barry Toepke, a career public relations professional with a great deal of credibility in the racing business – and someone we consider a friend. He did all he could to run damage control. In so doing, he and Narigi agreed to a frank conversation about the future of the track.

The largest question remains: How could the Monterey County Board of Supervisors vote 5-0 to entrust the county’s world-renowned racing circuit and its fiscal stewardship to a man with no experience in motor racing?

Narigi had been the well-known hotel general manager of the Monterey Plaza Hotel & Spa for nearly three decades, and deeply involved in all aspects of the hospitality culture in Monterey. He is also known in that industry as a “turnaround expert.” He retired from the job in May 2019 with plans to move to Washington State with his wife and run a consulting business to the hospitality industry.

However, at some point between his retirement and the county board vote in November, and as documented through emails between Narigi and Dewayne Woods, the Parks and Recreation administrator of Monterey County, Nairgi essentially was coached by Board Members and Woods on getting the contract before the bid was announced, it is alleged. An email sent to the ClassicCars.com Journal, dated August 20, 2019 from Narigi to Woods expressed thanks for a tour of the grounds and a request for all the pertinent financials and logistical documentation. Woods complied and shared more than 500 pages of data, according to public records.

While this process was happening, local accounting firm Hayashi & Wayland Accounting & Consulting, was doing an audit of the Sports Car Racing Association of Monterey Peninsula (SCRAMP)’s books at the track. For 63 consecutive years, SCRAMP had managed the track, but it had accounting issues in recent years.

In 2018, Tim McGrane, a respected motorsports and automotive industry veteran, was brought in as president of Laguna Seca and had been in the process of straightening out accounting as well as developing capital improvements for the facility.

McGrane told the Journal, “There were numerous invoices from the county (to Laguna Seca) for ‘services’ we weren’t even sure were performed.”

Narigi formed his LLC, A&D Narigi Consulting, named for his two sons, Anthony and Dominick, just 10 days before the press release announcing a call for proposals came out from the county board in October 2019. Narigi considers that more of a coincidence. As he explains in the interview, he was already working with four hospitality clients doing business as Narigi Consulting under a dba with the intent to incorporate as an LLC.

According to documents provided by Laguna Seca bidder and Long Beach Grand Prix founder Chris Pook, the contract with the county was signed by Narigi three days before the board’s vote of 5-0. Pook intends to sue the county for the time and money spent on his bid. He had previously filed a claim to recoup monies, which was rejected by the county.

In an email to the Journal, Pook wrote, “On Tuesday, October 15th, 2019, The County of Monterey issued a Press Release inviting ‘Interested Parties’ to submit proposals by Thursday, October 31st, 2019 for the Management of LSRA – Laguna Seca Recreational Area – and Laguna Seca.”

Pook continues, “It should be noted that on Monday, October 7th, John Narigi’s Attorney’s filed for the formation of A & D Consulting LLC, the company used to secure the management contract for Laguna Seca. Bearing in mind the time process for receiving a ‘Filing Date’ from the Secretary of State for a LLC, this means that discussions for the creation of the LLC took place the week before, i.e. on Thursday or Friday, October 3rd or 4th! Exactly 3 or 4 days after Dewayne Woods said, ‘I don’t know anything about this, whatever the Supervisors want I will do’ and some 12 days before the Press Release inviting ‘Interest Parties’ to submit their proposals!

“On September 30th, Dewayne Woods was instructed by Supervisor Alejo to call (Pook) and discuss (Pook)’s interest in a Management Operating opportunity at Laguna Seca – when informed why he was asked to call, the above was his response!!”

According to local political consultant Christian Schneider, “Pook should sue for the (A&D Narigi) contract to be null and void under the Brown Act.”

The Brown Act (Government Code sections 54950-54963) is intended to provide public access to meetings of California local government agencies. Its purpose is described in the Act: “The people of this State do not yield their sovereignty to the agencies which serve them.”

“By having these ‘off the record meeting’ without the county board involvement with the intent to award a contract is a clear violation,” Schnieder added.

Narigi denies any wrongdoing in regard to the Brown Act. It is discussed at length within the confines of the interview. Narigi says that he was doing his homework and that Dewayne Woods offered the same opportunity to all bidders.

County Supervisor Mary Adams emailed Woods asking how she would handle the “blowback” from her constituents. The track falls in her district. She certainly was willing to vote against SCRAMP as it was “in bad shape.” However, she wanted to cover her decision.

She told Monterey County Weekly, “It was a backroom deal. I don’t have any question about that.”

In the interview, Narigi is certain that he is there to not only keep and make “the iconic track” better, he wants to make the resource of the surrounding county park, Laguna Seca Recreation Area a much stronger asset.

It’s all been laid out by the local media, whom Narigi says, “I’m done with them.” But here is an opportunity to allow the man himself to speak and relate his side of the story.

I came away from the interview still skeptical, but certainly more confident in the track’s survival. Either John Narigi genuinely seeks another turnaround win, or he’s a brilliant actor. His concise answers certainly gave me a moment of pause away from doom and gloom.

Change is something that ranks very highly in causing people anxiety. Over 63 years, numerous personal kingdoms were built around the legendary circuit. The major change in management seems to have brought the warlords out of their figurative castles.

Give a listen and please share your comments. You be the judge…

Thanks For listening on your device of choice — and your platform of choice! You can download or stream the show on the following platforms: