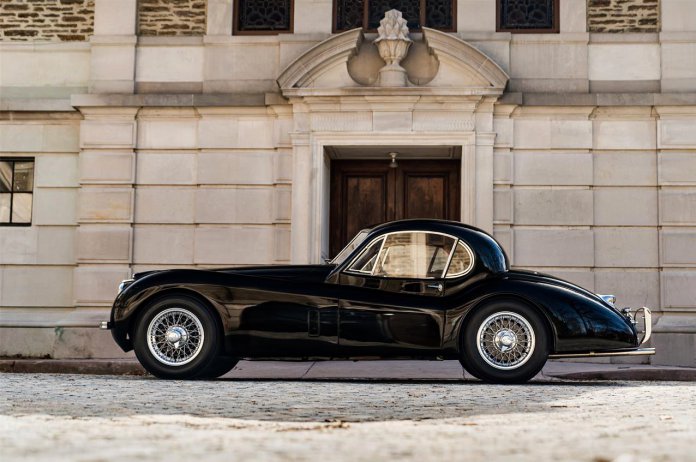 By 1951, when Jaguar introduced the art-deco teardrop lines of the XK120 Fixed Head Coupe, they already had impacted the motoring world with the XK120 roadster that proved to be the fastest production car in the world. The 120 in the name referred to its top speed of 120 mph.

The FHC actually posted a speed of 131.83 for a full hour on the speed ring of L’autodrome de Linas-Montlhéry, a race circuit in northern France, in 1951. The test driver, Leslie Johnson, climbed from the car after the test and suggested the car was so good, “It could have gone for another week.” This gave birth to the phrase in automotive circles, “Flat out for a week.”

The Pick of the Day is an early production 1951 Jaguar XK120 FHC advertised by a dealer in Philadelphia on ClassicCars.com. It is considered one of the most beautifully designed automobiles in history – sex on wheels!

Powered by Jaguar’s remarkable 3.5-liter DOHC inline 6-cylinder with an aluminum head and dual SU carburetors making 160 horsepower, the car was fast – like the marque’s namesake. The roadster had already become a track weapon of choice for many racers. But the FHC for all its speed lineage, was comfortable and luxurious inside.

“The example on offer is just that, an early production FHC,” according to the seller. “Chassis # 679117 is the 117th FHC produced. According to the JDHT Certificate on file, this example was produced on October 11th, 1951. Destined for its original selling dealer, George Motor Co of Honolulu, Hawaii via Jaguar distributor Hornburg of Los Angeles, Ca.

“While exact early history is not known, we do know that the (owner) acquired the car in the late 1980’s. By 1992, it was sent to noted restorer Steve Helms of Classic Motorcars in Reading, Pa. The restoration entailed a total strip to an absolute bare shell. Metal work was completed as needed and component restoration was carried out as detailed in the accompanying restoration photos and receipts. The restoration was put on hold over the years but was finally complete in 2004/2005.”

The seller mentions that only 30 miles read on the odometer since the restoration’s completion:  “(It was) never shown and barely driven beyond heat cycles and sorting miles.” The early production number also means that the handles, knobs, pulls and windshield trim are all chrome vs. Bakelite plastic found on later models.

The buyer of this lovely black-on-cream car also will receive restoration records/photos, tools, jack, spare, air pump, JDHT Certificate and the original data tag. At $95,000, it’s not exactly a steal, but certainly a worthy specimen that should hold its value for many years to come.