“This museum is dedicated to the preservation of our motoring history and we can’t afford to lose any more of that wonderful heritage.” – Johann Rupert 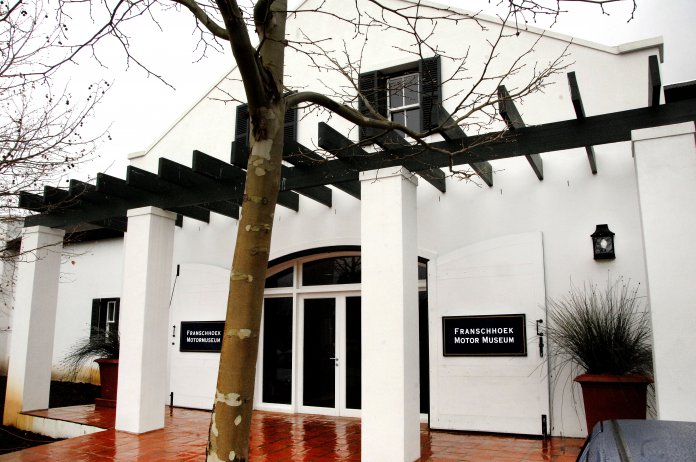 Not much was known about Africa until the 19th century. Europeans called it the Dark Continent, because of the savagery and mysteries that was thought existing in the interior. I was fortunate enough to venture a trip to the Dark Continent a number of years ago and discovered a gleaming jewel in a sleepy town, better known for their wine and cuisine than for their cars, called the Franschhoek Motor Museum.

The facility is located on the L’Omarina wine estate that’s less than an hour’s drive from the seaport city of Cape Town — not far from where the Atlantic and Indian Ocean meet (Cape Point). The museum buildings are at the foot of the Groot Drakenstein Mountains in the beautiful wine lands valley (Breed River Valley) of Franschhoek. This area known as the “French Corner” was originally the refuge of Huguenot settlers fleeing religious persecution in France over 300 years ago. As a tribute to this movement the Huguenot Memorial Museum was erected in 1948 in a spectacular setting with a handsome Cape Dutch-style building on the grounds that celebrates the influence of the French in South Africa.

The museum is an exclusive private collection of cars which pay homage to over 100 years of rich motoring history and is owned by industrialist Johann Rupert, heir to one of the largest fortunes in the country (net worth $5.9 billion). Rupert established the museum in honor of his father Anton Rupert who was a dedicated vintage car enthusiast. Anton created and structured a museum of vintage cars in Heidelberg in the Cape and his son Johann moved the automobile collection to the L’Omarins farm when it closed which belonged to his late brother Antionij after his father’s passing. In this quiet serene town of Franschhoek sits a monument of cars with interesting South African stories to tell.

On May 6, 2007, the museum opened to the public with historic automotive examples such as the first Ford to have been imported into South Africa (a 1903 Model A, a Rolls Royce Phantom II with hatches in the roof for ventilation while on safari, a three-wheel Messerschmitt ‘cabin scooter,’ a 1925 Chevy “Superior” Tourer that was owned by Anton Rupert’s father John, and a 1956 Aston Martin DB2/4 (one of only three in the world). Currently, the museum’s collection exceeds 220 vehicles ranging from a 1898 Beeston Motor Tricycle to a 2003 Enzo supercar.

About 80 exhibit cars are on view at any one time that are presented in four purpose-built temperature controlled de-humidified exhibition halls. The structures are state of the art with excellent high quality lighting, interesting audio-visuals, with all cars presented in chronological order in an un-crowded spacious setting. Each of the rectangular barn-like Dutch style buildings focuses on a selection of different manufacturers and shows the cars from earliest to newest. Every automotive work of art is kept in pristine condition and is the country’s largest collection of classic and vintage vehicles that include bicycles, pedal cars, collectables, racecars and exotic motor vehicles. Each hall holds 20 cars which are rotated from the collection that are in mint condition and are all regularly started and driven to ensure that they remain in roadworthy condition.

When Johann Rupert bought the collection from the defunct Heidelberg Motor Museum that was established by his late father Anton and founded the Museum, Wayne Harley was the former Heidelberg curator and luckily Rupert brought the collection to the new location and took Harley with when everything was moved to the Cape. Harley was responsible for the entire packing and moving of the museum and became the museum curator. He was also influential on the construction of the specially designed museum with the “focus being on not just cars but matching the architectural style of the Cape wine lands,” remarked Harley.

The museum facilitates a full workshop and technical team that operates under Harley’s direction while a fair amount of outside companies have been contracted to restore and spiff up the collection. Rupert chuckles as he mentions “a mate of mine whose wife still knows nothing of a car we store for him.”

The museum is always delivering a profound presence in South Africa participation in important events that encompass a diverse and interesting array of subjects related in some was to the automobile. On January 10, 2020, the premier horse race, L’Ormarins Queens’s Plate Racing Festival held at Kenilworth Club, the Franschhoek Museum played host to a display of vintage cars. The showcase presented a reminder of the elegance of an era of the role that horses played in the history of transport in South Africa. “Showing off these automotive masterpieces at a prestigious horse event marries horses and cars in support of a cause aimed at the well being of these elegant creatures that still continue to work in many of South Africa’s rural communities” said Harley.

Another event that the museum was immensely proud to be a part of was a “Top Gear Festival” at Kyalami racetrack located in Midrand, Gauteng Province, South Africa. The track was packed for days at the Grand Prix Circuit where some of the cars were driven around the track by Derek Bell, Sir Stirling Moss, Eddie Jordan, David Coulthard and Pink Floyd drummer Nick Mason.

Back at the museum, the finest collection of racing Maseratis are splendidly presented including the oldest example, the Roots supercharged 1500cc pre-war Grand Prix 6CM Maserati raced by South African-based Italian Massacurati. The most significant Maserati on display is the 250F designed by Gioacchino Colombo that reigned supreme in F1 from 1954 to 1958.

The very rare and first Jaguar SS is on display where the ‘SS’ became a no-no name and Jaguar dropped the SS and became Jaguar (SS stood for Swallow Sidecar Company), a brilliant red 1936 Cord 810 Convertible which was unique for its time as it had no running boards, no visible door hinges and was front wheel drive, a 1966 Ford GT40 that was the result of a failed proposal between Ford and Ferrari, the amazing Rothmans Porsche 956 which was owned by the Rupert family when it was raced by Jacky Ickx, a striking 1935 Austro-Daimler Bergmeister that was first seen at the Vienna Auto Show, and last but by no means least, the most mysterious car in South Africa at the museum, the ‘lost 1930 Mercedes 540K’, the country’s most expensive classic car. The legend is that Adolf Hitler donated the car to the German Embassy in South Africa during WWI and that the Third Reich gave several of them to sympathetic governments during the war. The car eventually was bought by Johann Rupert at an auction and brought it to the Cape estate to share with the public at the museum.

While at the museum, the Pit stop Café is a lovely place to have a refreshing milkshake or an espresso, muffins and scones and the famous Ploughman’s Platter consisting of cheeses olives and meats.

Wayne Harley states June 2020: “Under this current situation plus the fact the museum is shut leaves us not too sure as to when we will be allowed to reopen or if we will be allowed to. Over the last few months I’ve been fighting making sure that none of our employees are let go, plus on top of that maintaining the collection, buildings and grounds with only a handful of staff that are permitted to work under lockdown has massively effected my work days and priorities.”