‘Mickey Thompson: The Lost Story of the Original Speed King’

Like a ghost from the past, the original speed king tells his story in his own words 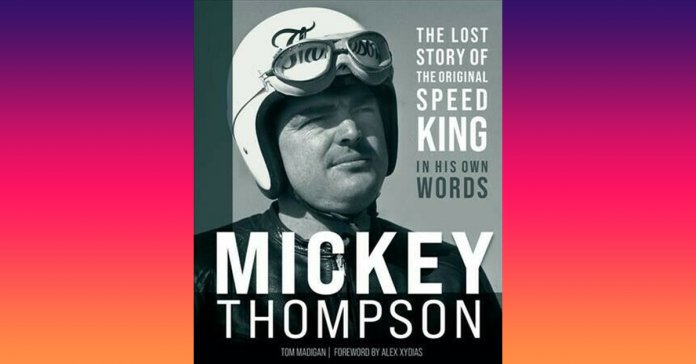 The name Mickey Thompson has mythical status. It’s a name that inspired so many to go fast. His name remains on many speed goodies to this day.

For many, the name also was shrouded in mystery when Thompson and his wife were gunned down in their San Gabriel, California driveway in 1988. A former business partner, Michael Goodwin, was convicted of a murder-for-hire plot in 2001 and is serving two consecutive life terms.

But past all the mystery, Thompson’s life was one of accomplishment in both racing and business. Whether at Bonneville, Indianapolis, Daytona, Baja or Pomona, the Speed King saw success after success. Many books have been written about the legend, but none might capture the essence of the man as Mickey Thompson: The Lost Story of the Original Speed King. After all, it’s Thompson who tells the stories.

In the early 1970s, journalist Tom Madigan was summoned by Thompson to work on an autobiographical book. Strangely, while Madigan was paid for his time and efforts, Thompson never did anything with the draft. Madigan passed away in March 2019, age 80. It was his final wish that the book be published.

An act of kindness to car nuts everywhere, his wish is now in the hands of a public that can hear Thompson’s firsthand stories and the insight of the author as he sat with the subject.

Like having a séance in the workshop, Thompson’s stories take us from his humble beginnings during the Great Depression to his first cars and interest in racing, tinkering, ingenuity and business. It really is a wonderful walk through the infancy of Southern California hot rodding. The stories from Lion’s Dragstrip to Bonneville, then onto Indianapolis. The foreword is written by So-Cal Speed Shop founder, Alex Xydias.

Thompson chose his stories well. The reader’s mind is given vivid imagery. But the book also has more than 150 photographs that run the gamut of the early years and the growing legend.

The stories are as inspiring to today’s car culture as they are to the history buff. We see new would-be Mickey Thompsons springing up in drifting, tuner culture and in the grassroots of motorsport – and this could be the guidebook.