A fixer upper in the garage destined for his daughter, snatched up by dad and became an obsession-restoration 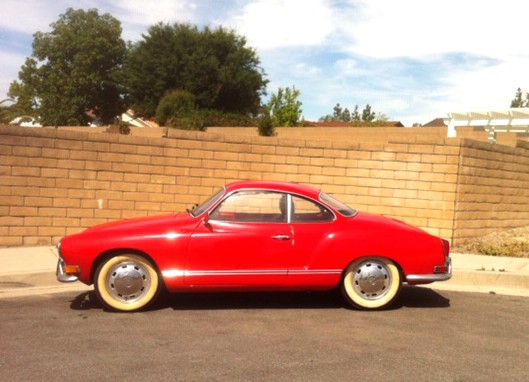 “I remember seeing the Karmann Ghia as a little girl and thinking this was such a symbol of my parents in the 70s. Yellow, compact, cool and ready to go at any moment, it symbolized their adventures and love.

When I was old enough to start thinking about driving, I discussed with my dad if I might be able to drive the Ghia when I turned 16. He had decided to undertake the restoration of the Ghia and this seemed like the perfect opportunity to ensure this amazing car would have more stories in our family.

At the time, the restoration project sounded like a relatively light touch journey. Little did I know the lengths my dad would go to find all the right parts, to restore every inch of the car to its original, and in some cases, better than original glory.

The project became years and by the time I was ready to drive, the car was so coveted and treasured, I could barely breathe on it, let alone drive it on the highway or to a movie. It became clear, that my dream of driving the Ghia as my first car was never going to happen, it was no longer a symbol of the past but a labor of love for my dad.” -Bethany Koby-Hirschmann, London

In the early 50s, Volkswagen was looking for a new image and contracted with Karmann, Germany’s oldest coach-building firm, to build such a vehicle. In need of a design, Karmann approached the Italian styling house Carrozzeria Ghia and the VW Karmann-Ghia was born in 1954.

So in 1971, we were on our way to buy a brand new VW Beetle at Wilshire VW in Los Angeles and as we arrived and walked in the dealership, there, in it’s yellow glory, sat a Karmann Ghia in center stage on the showroom floor. “I’ve always wanted a Ghia,” I thought but could we afford a higher payment. The salesman approached us and asked if we were interested in their “prize” sports car and I blurted out, “How much more a month would the payment be from a Beatle. With a big smile on his face he said, “Nine dollars more a month and about $50 more down payment. “Gee” I said to Pam, “Can we afford $86 a month” and she said, as she had a full time job and I was just starting my photo studio, “Lets take it!” “I’ll never forget driving that sporty, bright yellow Ghia right out of the showroom floor.”

Pam used the car for her every day driver for about 10 years and eventually, after a series of minor fender benders (all the other drivers fault due to the fact that the car was so small and was hit by blind sided drivers) I put the car in storage for the next 12 years or so, with Pam periodically saying to me “Throw out that piece of junk.” 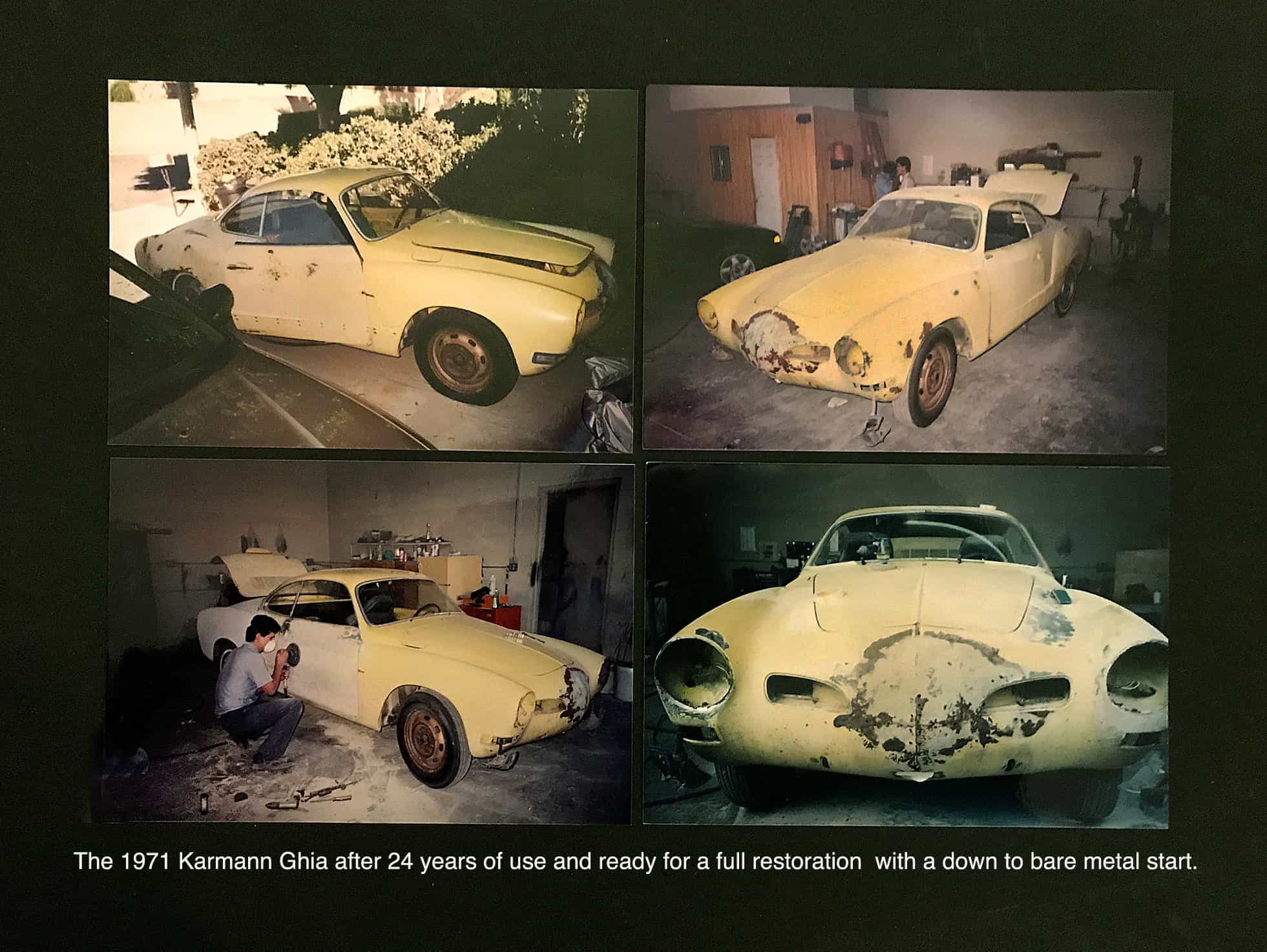 Somehow, I always thought I would fix the Ghia up for my daughter and teach her how to drive a 4-Speed. One year, as she approached 16 years of age, I started to putter with the Ghia and got it running and stood there gazing upon my “poor man’s Porsche” and declared, “I’m not just gong to fix this car up, I’m going to restore it to near show quality. I had to tell my daughter “You’re not getting it.” She said with great disappointment, “Why not.” I had to explain my plan and wound up buying her a used plum colored Saturn. 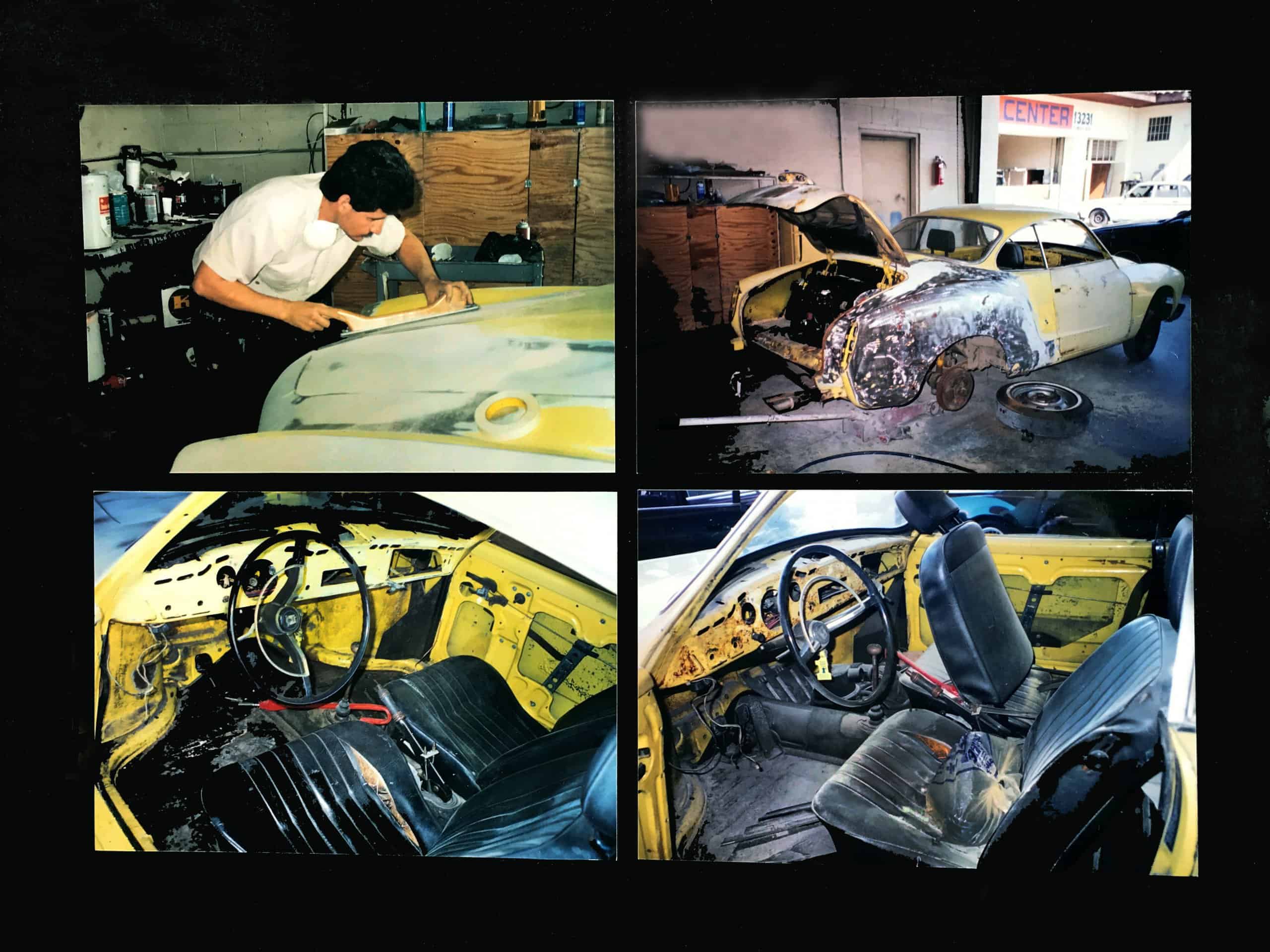 Now it’s 24 years since I bought the Ghia and as you can see the car was in pretty bad shape. The typical nose was dented in along with rust creeping through the body and worst of all, the rear fender was separating from the body while one of the front headlight buckets was rusted out. 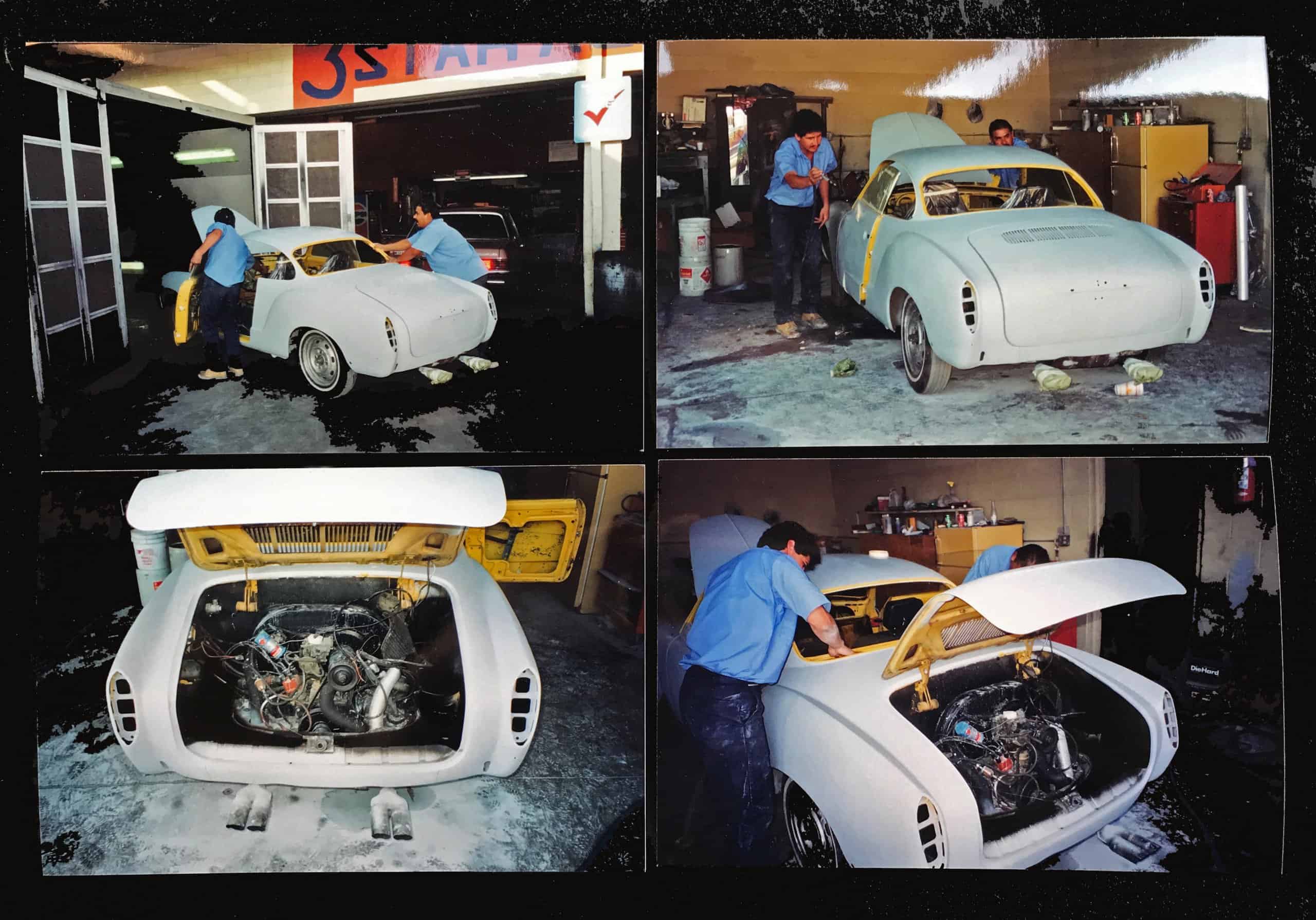 I was serious about trying to do much of the restoration myself from learning body work to some rewiring the harness, re-carpeting and re-upholstering (from kits), to some rebuilding of the 1600cc air-cooled engine.

After starting to bang the dent out of the nose while stupidly sticking my head down in the trunk and almost causing me to go deaf, I realized that ear plugs were needed to accomplish this task. To help with the wiring, I discovered a VW junkyard in the city of Duarte where I spent most weekends rummaging through the rusted old Ghias and Beetles. My brilliant idea to help with the electrical harness (even though I had the color coded wiring schematic) was to photo graph the wiring configurations and use the images to plot the re-wiring project.

As far as the rusted out headlight bucket, I found a Ghia with a salvageable bucket and marked it with chalk. Then George, who reminded me of the Texas chain saw massacre, came over with a diamond circular saw and sliced off the marked area like it was butter. He turned to me and said with this glow in his eyes, “Is that your Jaguar over there. If it is let me know when you want me to slice it in half!”

As you can see the Ghia spent the next 6 months at the body shop where it was stripped down to bare metal and painted a Porsche 911 Red. When the car emerged out of the paint booth I couldn’t believe it was the same car. 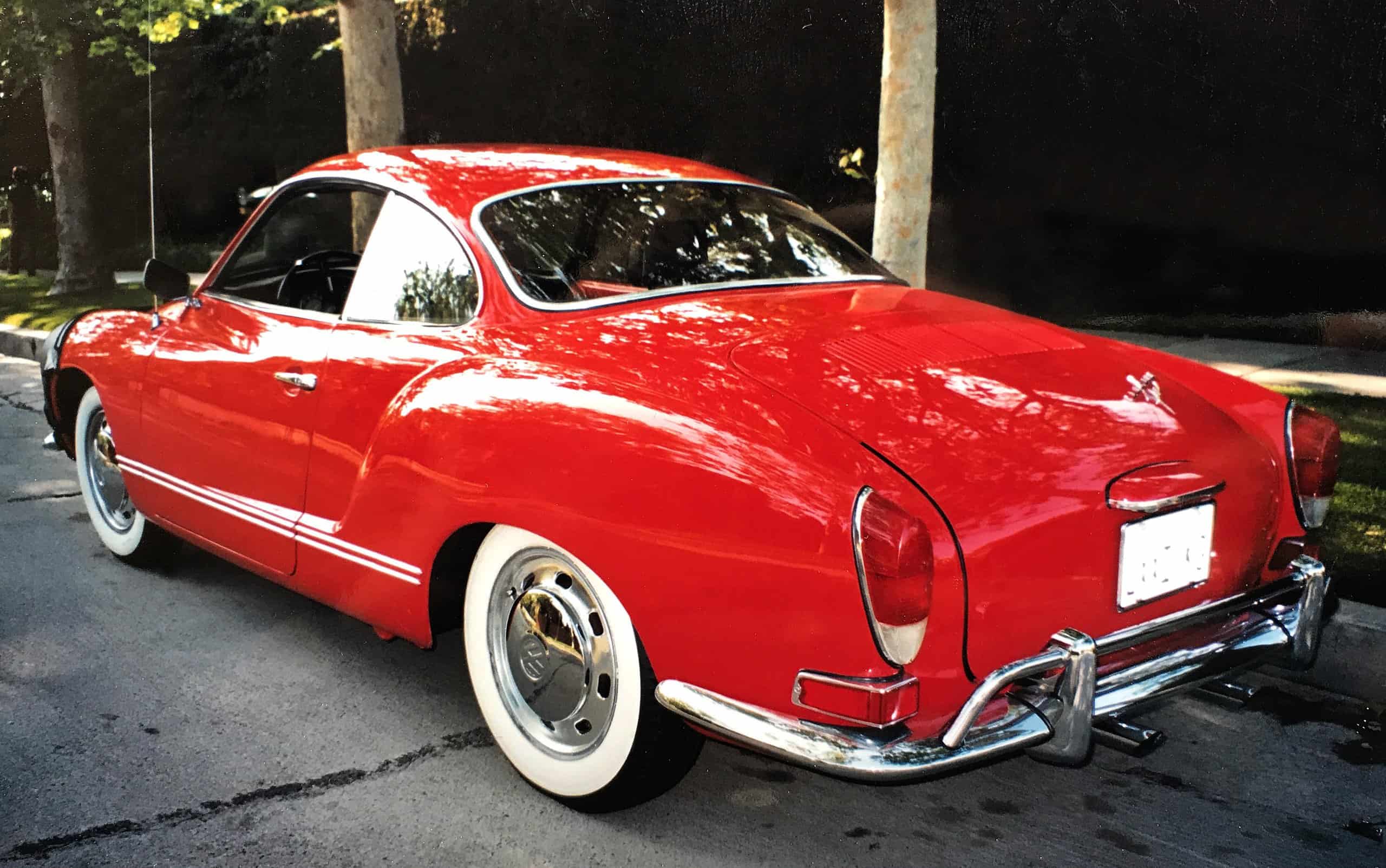 I slid into the car with the disheveled seats and cracked dash and drove my “re-born baby home.” I spent few years redoing the carpeting, seats and installing a new dash and gauges right in my driveway. I took the original 16 pieces of front and rear bumpers off the car and had each piece nickel-plated re-chromed and wound up taking an entire weekend to re-install them. Even though they were the original bumpers, they never fit perfectly when you put them back on the car. All new rubber from the windshield to the front and rear lights was installed. And guess what?  Brembo front disc brakes for a VW were installed. Nothing but the best for my Ghia. 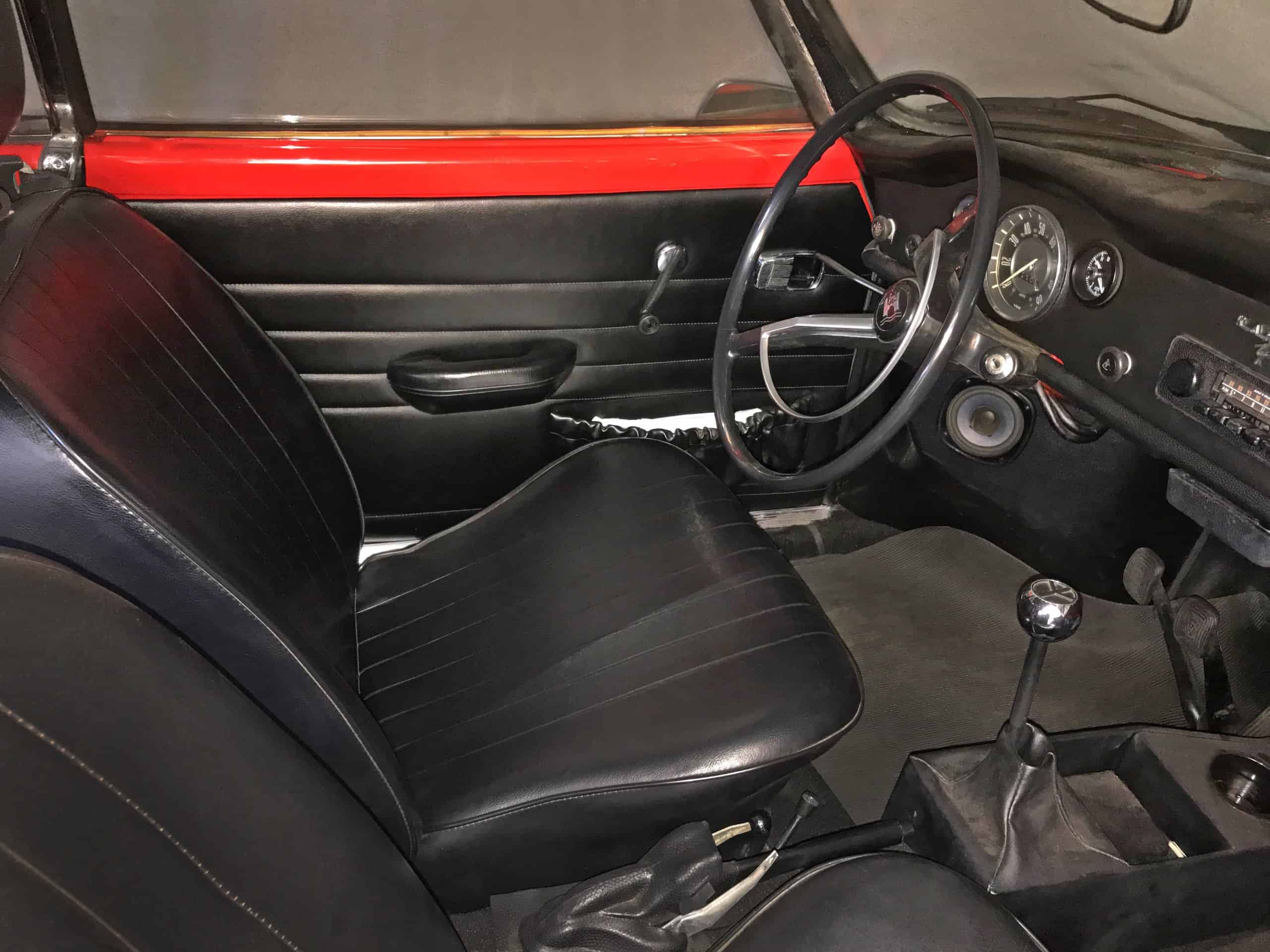 About 10 years ago, I felt like the 1600cc dual port engine at 60 hp needed a little boost so by complete accident, I was browsing the internet and came across “Baby Progressive Dual Webers” carbs, the same size as the original single throat Solex Carburetor that came with the car. We installed the “Dual Webers” and managed to bump an extra 8-9 hp so now the Ghia is a “little Red Hot Rod.”

At the same time, I realized that a major drawback of a VW air-cooled engine was a meager oil sump capacity of only 2.5 litres of oil and an ineffective oil filter in the form of wire gauze. I came across a product called a Thin-line filter sump. This device replaced the stock VW drain plate and wire gauze with a deeper-than-normal and finned sump plate and a compact cartridge filter pinched from a well-known brand from a Japanese motorcycle. We installed this unit and the engine runs cleaner and cooler.

The Ghia got lonely a few years ago so I got her a friend to keep her company in my garage, a white1963 Alfa Romeo Giulia Spider. The German and the Italian are getting along quite well now.

Pick of the Day: 1968 VW Karmann Ghia with a colorful 1-family history

Pick of the Day: 1966 VW Karmann Ghia with quite a difference