Could this be the most beautiful Ford ever?

Popular with French celebrities at the time, the Comète is often overlooked when considering Ford’s best designs. To this day, the coachbuilt coupé is easily one of, if not the, most attractive Ford ever built and sold to the public. 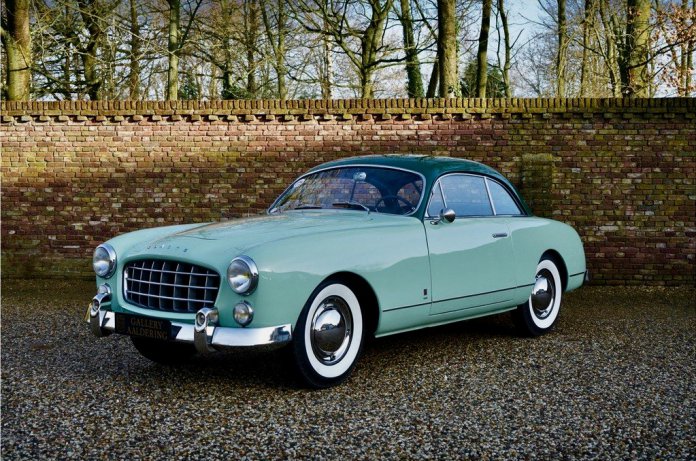 When you first view a 1952-1955 Comète, whether, in person or a photo, it’s unlikely that you would guess that it’s a Ford. These cars are often mistaken for an early Ferrari and there’s a reason why. Its design was credit by some of the same artists who drew now-classic Italian cars including Alfa-Romeo, Cistalia, and of course, Ferrari.

The Comète project was driven by the new president of Ford SAF (Société Anonyme Française), François Lehideux, who had joined the company in 1950 from Renault. Lehideux desired that his new prestige model should be developed independently of  Ford in Dearborn.

Several sources point to the 1948 debut of the Simca Huit-Sport, a stunning coupe, as inspiration for the Comète project. Based on a standard Simca 8 chassis, the Huit-Sport was first shown at that year’s Salon de l’automobile and went into production in 1950.

The Huit-Sport was designed by Stabilimenti Farina, owned by Giovanni Farina, older brother to ‘Pinin’. Soon after the elder Farnia’s company was absorbed in Pininfarina.

Ford SAF was then selling the Vedette range of sedans, wagons, and hardtops that had been originally designed in Dearborn as small cars for the US market. When concerns regarding the smaller model cannibalizing sales from full-size Ford were raised, all tooling was shipped off to the Ford SAF plant in Poissy, just west of Paris.

The cars were powered by the 2.2 L (136 CID) Flathead V8, originally developed in France, then later sold in the US and often known as the V8-60, a favorite powerplant among Midget racers in the 1940s and 1950s.

The V-8 powered Fords were both large for the European market and expensive. Not only were they more costly to produce but the French taxation system severely penalized cars powered by engines larger than 2.0 liters.

By European standards, the Comète was a sizeable car. It measured 182” long and 55” inches high, about the same as a current BMW 4-Series. In comparison to the modern BMW, it was narrower by 10”. Weight was hefty for the time at 2,844 lbs.

The Comète featured a 1949 Ford inspired grille while later models displayed an egg-crate grille the French derisively likened to a “coupe-frites” or as we might say a French fry cutter. It’s difficult for the source of this change of front ends to be identified nearly 70 years later, but it was around the time the Pininfarina badges began to be affixed to the Comète.

The quality of the finish and fittings was superb including a ribbed stainless steel dashboard and door handles and a fabulous three-spoked steering wheel. These attributes were recognized by the English magazine Autocar, which praised the Comète for its outstanding build quality, good road manners, lavish equipment and graceful appearance.

Early models retained the V8-60, which the French referred to as the Aquilon engine. At the 1952 Paris Motor Show, the Comète appeared with a bored-out flathead V8 Aquilon (named after the northeast wind) now displaying 2.35 L (143.7 CID) with power increased to 80 HP. This became the standard engine until the end of Comète production.

In 1954, a more powerful and luxurious Monte Carlo was offered. It was fitted with the 3.9 L (239 CID) Mistral V8 originally developed pre-WWII for Mercury models but soon found favor in commercial applications. As there were no Mercury models sold in France at the time, the Mistral (named for the winter wind of the Rhône valley) was viewed as a truck engine, undercutting the prestige of the 100 HP engine. All Comète models were fitted to a truck-derived Pont-à-Mousson four-speed manual transmission rather than the available Ford three-speed of the time.

The Comète Monte Carlo was a more upscale model in the Comète line. The interior featured two-toned leather seating surfaces while the exterior was upgraded with wire wheels and a non-functioning hood scoop, along with the egg-crate grille.

The larger engine drove the tax rate way up, so its price was now 65% greater than the mechanically-similar Vedette large sedan. Between the cost of the labor-intensive coachbuilt production and the high taxes made the Comète Monte Carlo the most expensive new Ford in the world at the time.

Several of the more powerful Ford Comète Monte Carlo models were entered in the 1954 Monte Carlo Rally, one driven by French racer Pierre Levegh. This was big news for Ford has Levegh had nearly won the 24 Hour of Le Mans the previous year, driving solo and leading by four laps in the last hour of the race when the crankshaft broke in his Talbot. A few months later, Levegh was recruited by Mercedes-Benz for the 1955 Le Mans contest, the tragic race where he and 83 spectators were killed when his car launched into the crowd.

In total 2,165 Comètes were built, most being sold and delivered inside France. Today, auction values for the cars can range as $100,000 for one of the 699 Comète Monte Carlos with the larger Mistral engine.

During 1954, Ford SAF was sold and the Comète’s final year of production took place under Simca. The Simca Comète Monte-Carlo continued to be offered through July of 1955. Ford continues to operate in France as a distributor of cars and trucks assembled elsewhere under the name Ford of France.