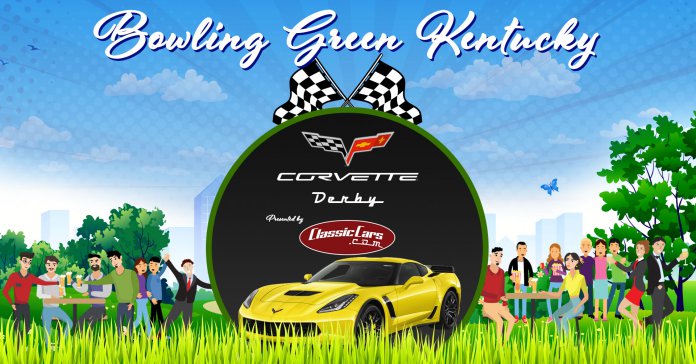 The 2014 C7 Chevrolet Corvette won the Fiberglass Follies by a front clip over pre-race favorite, the 1990 ZR1. The 1978 Indianapolis 500 pace car, the first Corvette to pace at the famed race, finished third.

The race was a figment of the imagination designed to fill a void in the real horse racing scheduled caused by the postponement of the annual Kentucky Derby at Churchill Downs in Louisville. Hey, Louisville is just north up I-65 from Bowling Green, home of the Chevrolet Corvette, so, we figured, let’s do a “Race for the Roses” using classic Corvettes.

We selected 20 historic Corvettes to compete, well, actually 21, but since it was powered only by a straight 6-cylinder engine, we gave the original version, the 1953 roadster, the honor of doing a parade lap before the race, which, like the Derby, would be conducted on a dirt oval track, an interesting challenge for the V8 powered sports cars.

So here’s how the race unfolded:

Also getting a great start was the 1960 Corvette, the first of the breed to win its class at Le Mans, and it was able to take a position just to the right of the Indy pacer as the cars headed toward the first turn.

As the cars entered that turn, the 1963 CERV 1 came roaring up on the outside, the Callaway got loose in the turn and the CERV had to spin out to avoid the Callaway car, which also spun and came to a stop facing the wrong direction on the track.

The 1967 L88/427 made a charge on the far outside as the cars hurried down the backstretch, but couldn’t maintain traction in the transition from backstretch to the turn.

The C8 went to the outside as the cars were coming out of the turn but the track was soft out there so the C8 had to tuck back into the pack as the cars turned into the homestretch.