Driven: And we have liftoff!

The most fun I had with the Scat Pack Charger Widebody was testing the launch control. 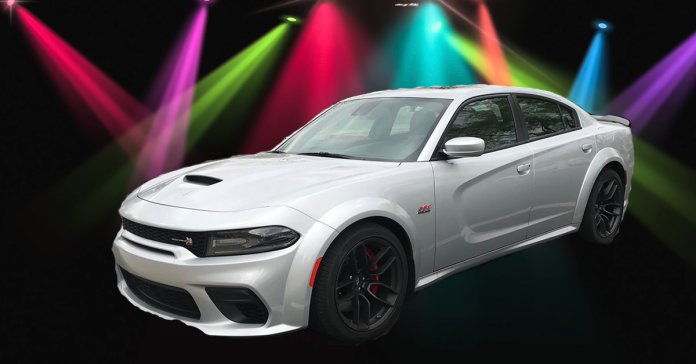 “Close the door, put out the lights. You know they won’t be home tonight,” Led-Zeppelin’s Robert Plant sang in the beginning of the anthem No Quarter through the 19-speaker Harmon Kardon sound system as I sat at the top of the downhill on-ramp. In my hands was a familiar body with tons of ponies, straining to be let loose.

Driving the 2020 Scat Pack Dodge Charger was an experience of quick speed, decent handling, terrific braking and room for the kids. It was about the most monstrous family-sized car with which I have ever had the pleasure of scaring my children.

The “Scat Pack” moniker itself is a pure advertising term, dating back to 1968, when Bill Maloney and the ad agency BBD&O devised a formula for Dodge muscle cars that hit certain benchmarks such as quarter-mile ETs of 14.99 seconds or less. The name was actually devised from the popularity of the “Rat Pack” of Frank Sinatra, Sammy Davis Jr., Dean Martin and Joey Bishop. It was considered a marketing success, so much so that the branding actually replaced the “Super Bee” badges that appeared on prior incarnations. 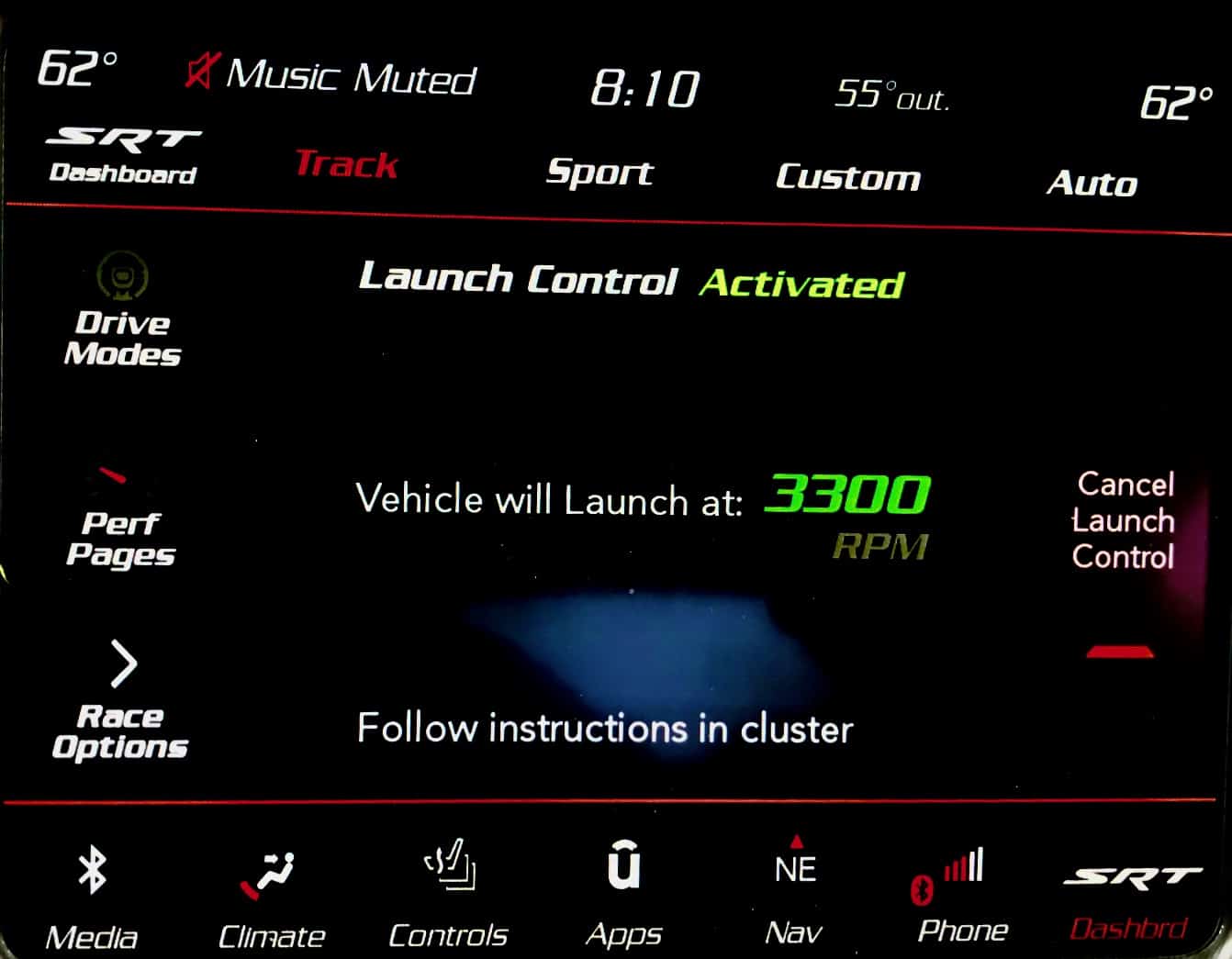 “The snow falls hard and don’t you know? The winds of Thor are blowing cold.” I was about to swing Thor’s hammer. A recent extension completion of the 202 Freeway, here in the Ahwatukee Foothills of Phoenix, Arizona, meant traffic was light enough to safely test this cool feature.

According to the owner’s manual, “Launch Mode is intended for off-highway or off-road use only and should not be used on any public roadways. It is recommended that this feature be used in a controlled environment, and within the limits of the law. 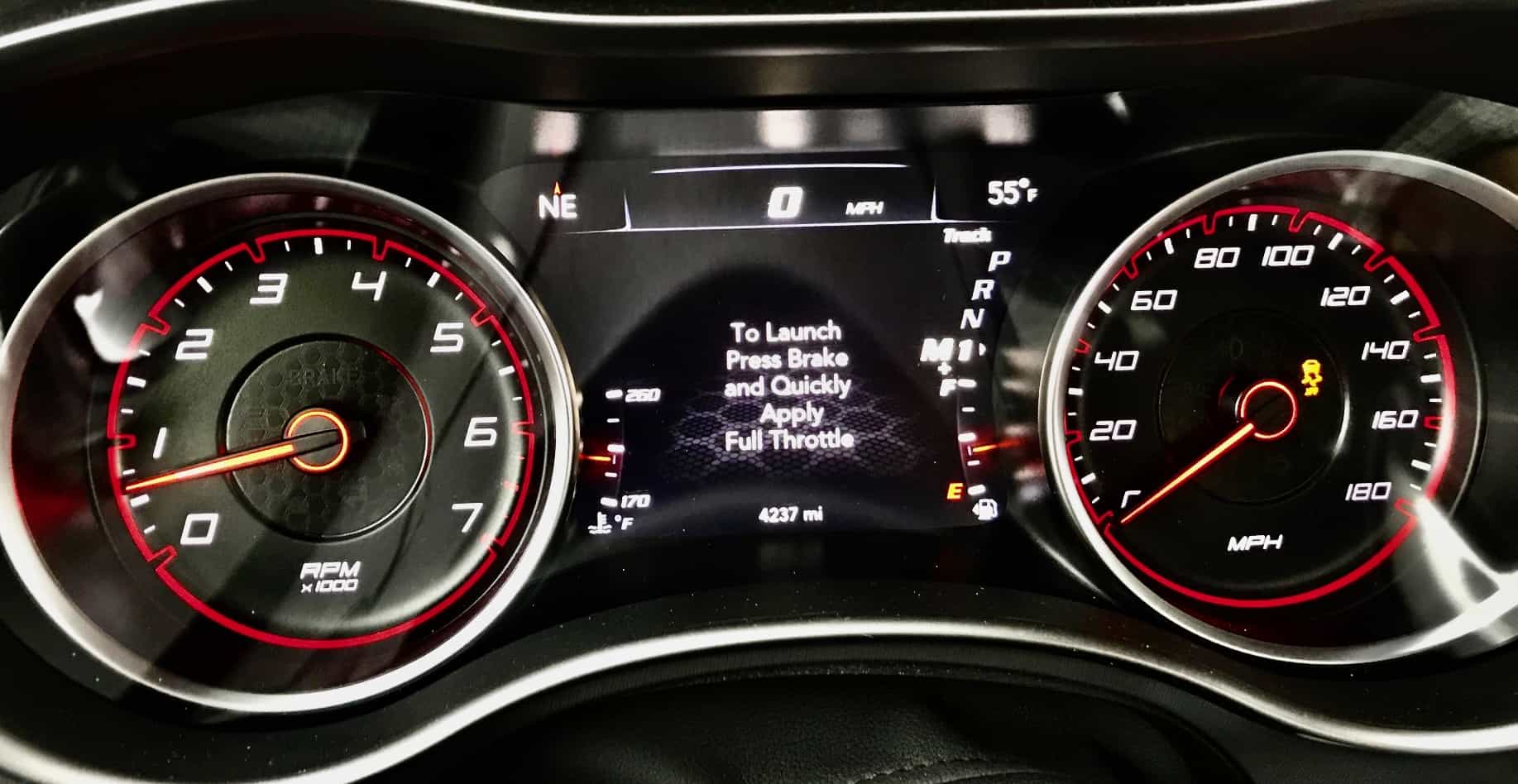 “The capabilities of the vehicle as measured by the performance pages must never be exploited in a reckless or dangerous manner, which can jeopardize the user’s safety or the safety of others. Only a safe, attentive, and skillful driver can prevent accidents.”

Meh… Lawyers. Considering I am sitting at the top of an empty on ramp with no traffic, full-tilt-boogie time.

Pressing the buttons on the 9-inch screen in the middle of the dash – which has an amazing number of setups and feedback information, including dyno, g-force, grip and driver assist level, stress on the machinery and much more – I set up the launch control. The screen then instructs me to hit the gas and release the foot brake… 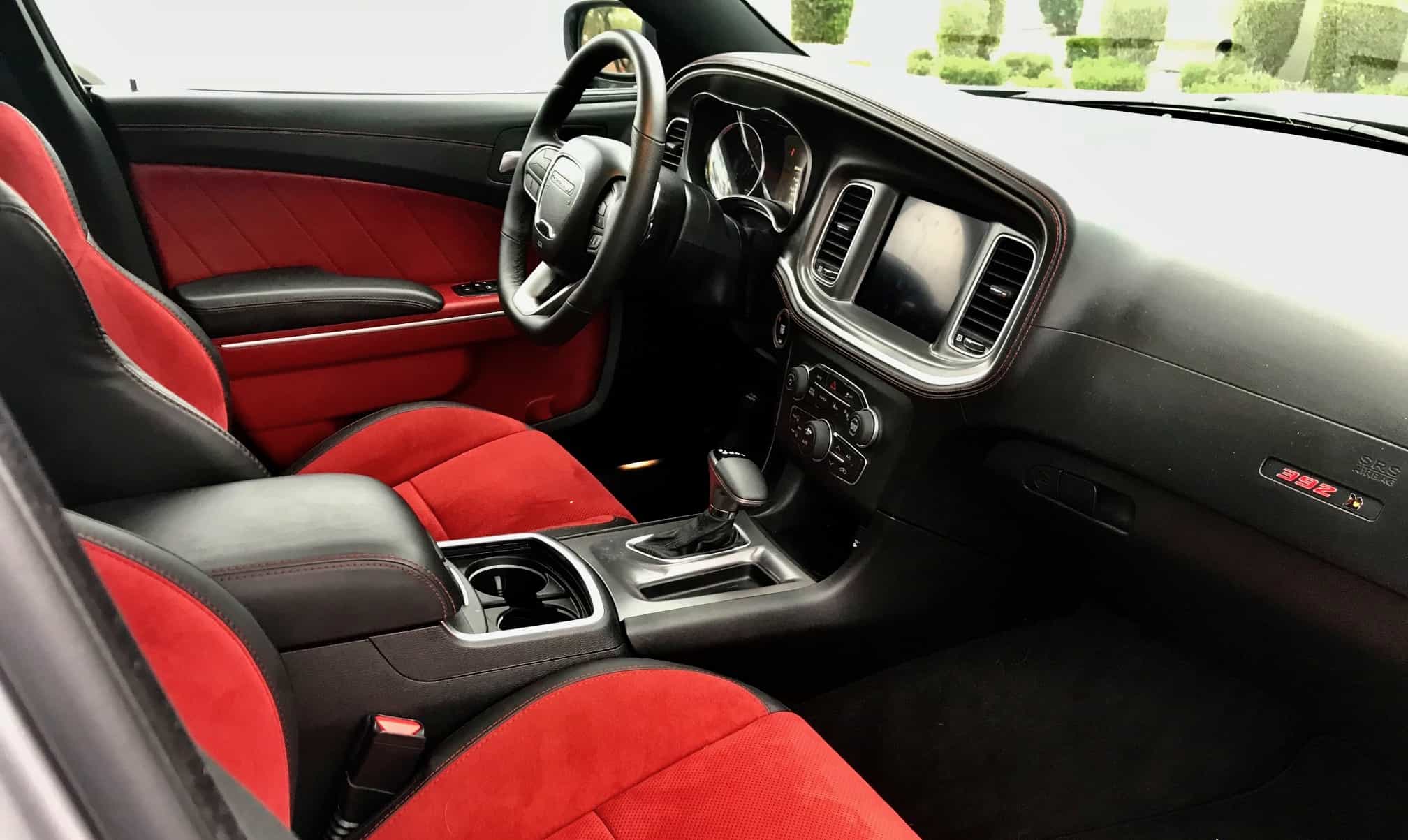 “They’re wearing steel that’s bright and true…” Whammo! Off we go with a minor chirp to the tires! Eyes up, hands at 9 and 3, it felt like those rollercoasters that accelerate from a standstill. It raced to 60 in a hair over four seconds and kept going. Laying down 485 horsepower from the 392 Hemi with traction controlled 475 pound-feet of torque and an eight-speed automatic trans with paddle shifting, this car dug right in and threw my body back in the seat. By the time I glanced at the speedo …let’s just say I can’t print it here as it might be probable cause.

As I entered the freeway, I let off and gave a gentle tap of the big 6-piston Brembo brakes, bringing the monster back to highway speed. Then I hit the next exit; turned left; went under the bridge; and did it again, this time with the paddles, timing my shifts as best I could, then headed back to the office. 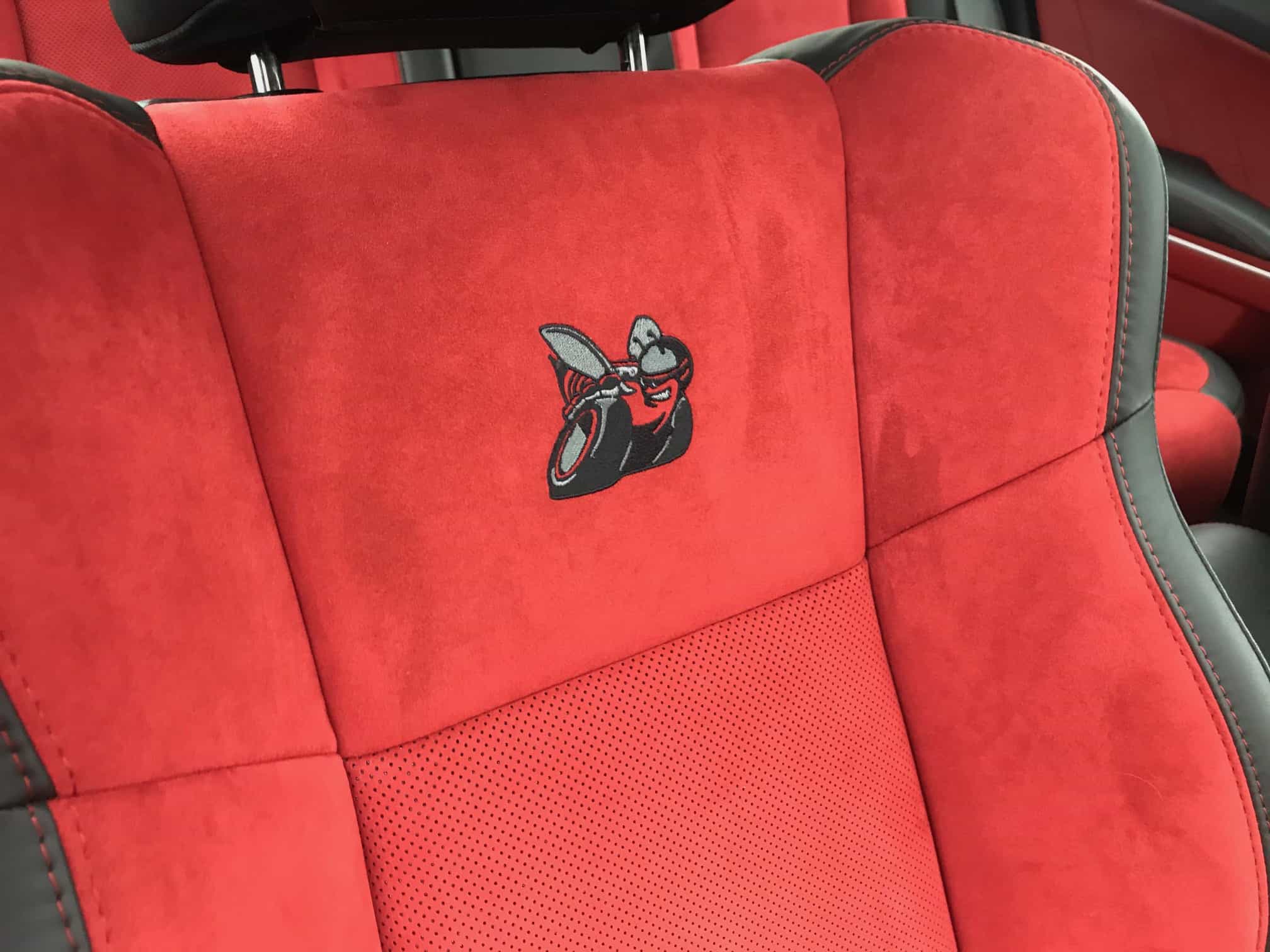 Honestly, paddle shifting is not all that required as leaving this car in full auto is a no-brainer as the intelligent gearbox with several settings, including track mode, is faster and does a fabulous job of predictive shifting both up and down.

Interestingly, the platform and body of this car has not really changed since 2005. The LX platform has been used for the Chrysler 300, Dodge Magnum, Charger and the fourth-gen Challenger. However, many incarnations, including the R/T, SRT and Hellcat, have been turning heads for that entire time. It has been a long, successful run.

The rest of the time I spent with the 2020 Scat Pack Charger was continuously fun. The big 20-inch Devil’s Rim Aluminum wheels shod with Pirelli 305/35ZR20 tires and the widebody competition suspension made this car handle beautifully. Letting it loose around a corner still allowed the car to drift some – enough to get a collective whoa out of my three daughters as we headed to breakfast on a Saturday morning. 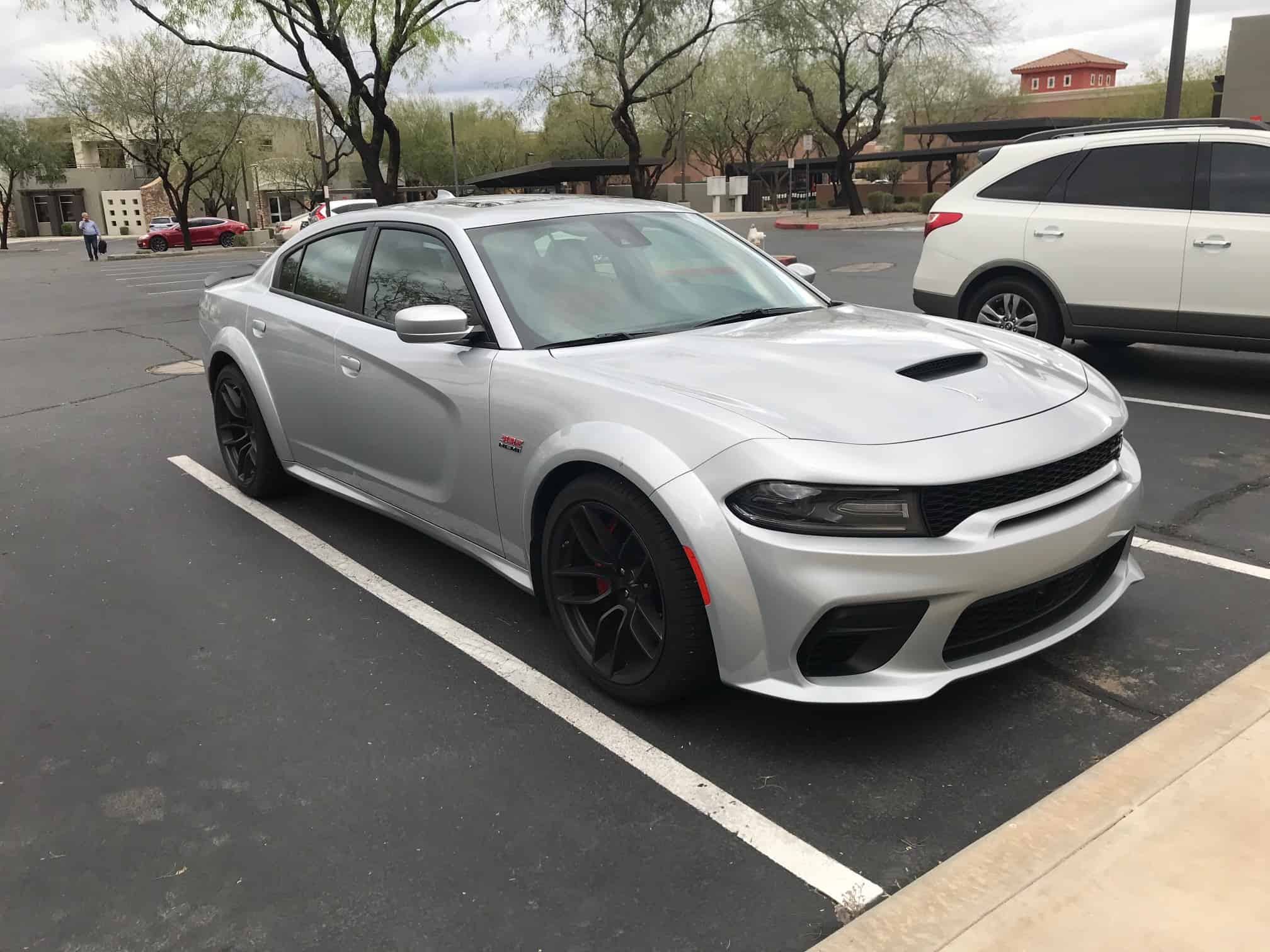 The only real complaint I had with the car was the seats. While I realize this is a muscle car, I could not get into my typical comfortable driving position. I like the seat low in the car with support under my knees and a straight up and down back support so I have bend in my elbows for turning. The seat sits high and felt a little short at the knees.

Overall, this car was a blast to drive. I got thumbs up pretty much everywhere I drove it. The exhaust note was great music – but Led-Zeppelin’s No Quarter was an awfully nice soundtrack for testing that launch control.