Taking a Vantage of 72 Hours of Le Mans

As if four days in France with keys to a V12 Aston Martin aren’t enough, there were all those dinners with Shelby and Salvadori, and then 3 laps of the circuit 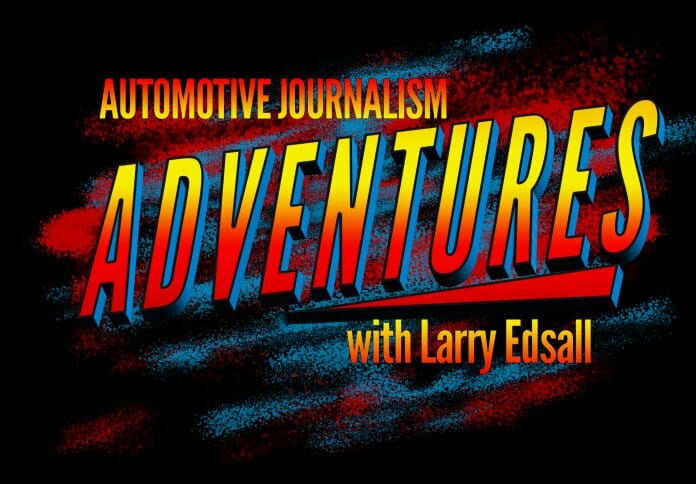 To celebrate the 40th anniversary of its victory in the 24 Hours of Le Mans, and to publicize the launch of its DB7 Vantage model, British automaker Aston Martin invited the American automotive buff books — Road & Track, Car and Driver, Automobile, Motor Trend and AutoWeek — to send an editor to the famed French round-the-clock race in the summer of 1999.

Probably because I’d driven — very slowly, very carefully — the multi-million-dollar one-off concept version of the car the previous year, and because I’d covered the Le Mans race a couple of times previously, I drew the assignment.

Here was the schedule: Fly from Detroit to Paris, be handed the keys to a spanking new DB7 Vantage and instructions on how to get to the Chateau de Noirieux, a 16th century estate on a bluff overlooking the Loir River. Located about an hour drive — or more like 90 minutes if you take the scenic route through villages and countryside (as I did) — from the Circuit de la Sarthe, the chateau would serve as base camp for the program.

As for the program, it consisted of driving from chateau to circuit,  where Aston Martin had a hospitality house at the Tertre Rouge, watching practice, qualifying and the race (1999 is remembered as the year of the flying, flipping Mercedes-Benz CLR racers), and then returning to the chateau for dinner each night with Carroll Shelby and Roy Salvadori, who in 1959 had driven an Aston Martin DB1 to victory at Le Mans.

Oh, and as if the stories shared by Shelby and Salvadori weren’t informative and entertaining enough, for good measure magazine publisher Bob Petersen was on hand to share tales as well.

But wait, there’s more —a special event the morning of the race — but I’ll get to that a little later.

The new DB7 Vantage was Aston Martin’s first vehicle powered by a V12 engine. Since the British automaker was owned by Ford, the engine was a joint effort by Aston Martin Lagonda, Ford and Cosworth. Based on the 700 horsepowerturbocharged V12 built for the Ford GT-90 and Indigo concept cars, the 6.0-liter powerplant was normally aspired in the Vantage, which it empowered with 420 horses and 400 pound-feed of torque. Customers could opt for either a ZF 5-speed automatic or 6-speed Tremec manual.

Despite the car’s dynamic capabilities, my first experience in it produced some disappointment. I drove southwest from Paris on the A11, the A short for Autoroute, the French equivalent of the German Autobahn or American Interstate. I’m in a powerful Aston Martin and pretty much ignoring the posted speed limit when I notice a single bright headlamp rapidly approaching from behind.

Just as I start wondering what’s that much faster than my car, le Train a Grande Vitesse sweeps past. Ah, yes, the famed TGV, cruising along at 185 mph. Aston Martin says the Vantage can match that speed, though I’m not about to attempt that on this public roadway, so I simply smile as the train disappears into the distance.

The time at the track was fascinating, and the flying Mercedes certainly gave everyone pause in the paddock, pits and all around the circuit that stretched nearly 8½ miles of purpose-built track and public roadways. But the highlight of each day was the gathering around the dinner table, listening to Shelby and Salvadori and Petersen, and even asking an occasional question.

Shelby and Saladori were reunited with the DB1 they drove to victory at Le Mans, driving a few laps around the circuit in the car.

“I’ll bet they’re spending more on these two days than our racing budget in 1959,” Shelby suggested.

Knowing that Ferrari’s 250 TRs were faster, Aston Martin team managers John Wyer and Reg Parnell devised a strategy that had Stirling Moss as sacrificial rabbit, racing ahead at the start and setting a fast pace in hopes that the Ferrari drivers would pursue, overheating and stressing their engines.

The Moss/Jack Fairman Aston expired 4 hours into the race, but by then two of the Ferraris also were done for the day.

Shelby and Salvadori were in the lead, until “the situation with the tire put us behind,” Shelby noted.

Salvadori felt a vibration. The team figured it was a transmission issue and signaled him to stay on course until the next scheduled pit stop. Instead, it was a degrading tire and by the time repairs were made, Phil Hill and Olivier Gendebien had put their Ferrari in front of the field.

But Sunday dawned hot, the Ferrari expired and Aston Martin finished 1-2, the Shelby/Salvadori car ahead of teammates Paul Frere and Maurice Trintignant.

Shelby told his most lasting memory of the race was the suspense, “…wondering if the car would make it, saving your brakes, saving your transmission. It was a long, long day, and it gets longer toward the end. You think it’s never going to be over.”

And it wasn’t, really, for Salvadori. Hot exhaust from the engine ran beneath the driver’s right foot. Shelby won shoes with asbestos lining. Salvadori did not and the toenails on his right foot were burned off and never grew back.

And now the more I promised: It turned out that because of the anniversary of Aston Martin’s victory, the Aston Martin Owners Club had been invited to do three parade laps behind the pace car the morning of the race, and our hosts had arranged for our cars to be up front in that parade.

There would be no passing, we were told. This is a parade, not a race.

At dinner the night before, Aston Martin chairman Bob Dover asked me for a favor. His executive secretary was part of the company’s entourage at Le Mans and he wondered if I’d be willing to take her in my car as a passenger for the parade laps.

Obviously, I agreed, and the next day we took our place in the lineup just a couple of vehicles behind the pace car. We didn’t exceed 60 mph on the first lap, but on the second, the pace picked up to triple digits on the Mulsanne Straight, and then the pace car pulled off and things went wild.

Some of the club members had all-out racing cars and saw this as their once-in-a-lifetime Le Mans opportunity and off they went.

Those last two laps were a lot of fun, though we had to be careful to avoid the places where cars had puked their oil onto the track, and at one point I learned how well the DB7 Vantage handled as I avoided being hit by someone suffering from the red mist.

I’m sure Dover’s assistant got a much more thrilling ride than she had anticipated. I know I did.