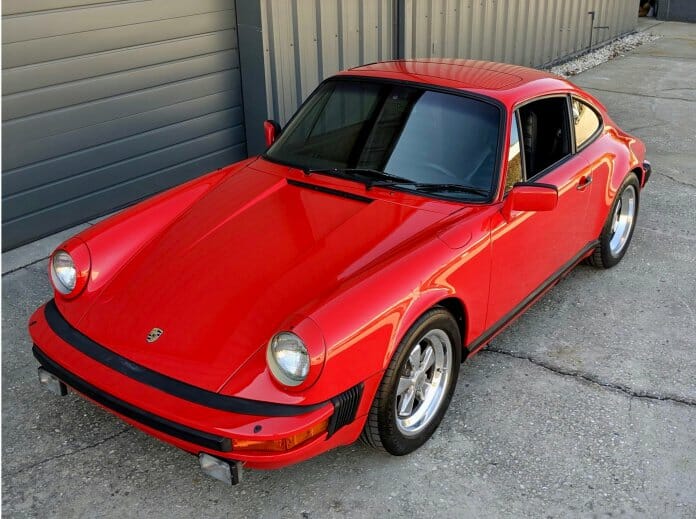 In 1978, Porsche updated and upgraded its 911S with a 3.0-liter engine that matched the displacement, albeit not the power, of its former Turbo Carrera model. Voila! The 911S became the 911SC, which was available as a coupe or with a Targa top. In 1983, its final year of production, the car was available as a cabriolet as well.

The Pick of the Day is a final-year version, a 1983 Porsche 911SC coupe advertised for sale by a dealership in Osprey on Florida’s Gulf Coast.

The dealer notes that over the course of its production run, only 2,559 such U.S.-spec coupes were offered, and this SC is No. 2407, one of the last of its breed.

The car comes with a complete ownership history, from its original owner, a pilot in Texas “who would own the car from 1983 until 1992 and put on roughly 30,000 miles” to the current owner, to the second owner, an FBI agent in Fort Lauderdale, Florida, and on through the current and sixth owner, who “has spent nearly $20,000 in recent total rebuilds, upgrades and parts.”

While the odometer shows 101,865 miles, only around 500 of those miles have come since “a full engine rebuild was… done in a ‘while you’re in there’ sort of mentality,” a monthlong rebuild and upgrade that included Carrera-style timing chain tensioners, updated air-conditioning system, new timing chain and gears, main bearing kit, rod bearing set, intermediate gears and connecting rods, as well as rebuilding of the cylinder heads, cleaning of pistons and cylinders, new rings, gaskets and seals. Work also was done to the suspension.

“The car runs and drives very well,” the dealer assures. “The 915 transmission shifts nicely and has less than 1,500 miles on the new clutch.”

The car was repainted in its original Guards Red color in 2003, when the seats also were reupholstered.

The dealer reports some light orange peel on the car doors, a small crack in the dash and a small tear in the headliner. At some point the original steering wheel was replaced with one by Momo.

The car rides on optional 16-inch forged wheels and has a factory sunroof.

The car is being offered for $41,500 or best offer. To view this listing on ClassicCars.com, see Pick of the Day.