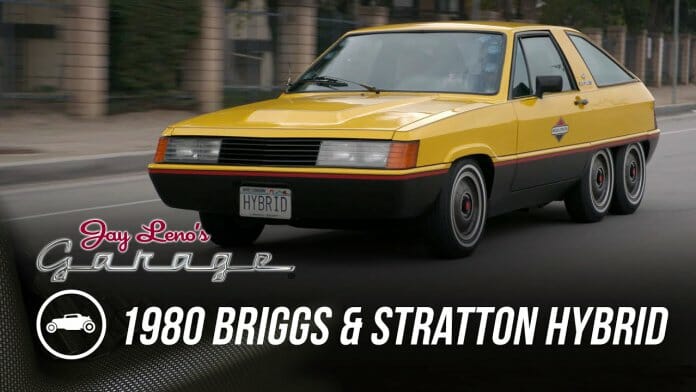 Briggs & Stratton is best known for making lawnmower engines, but the company has experimented with cars. One of those cars was recently featured on “Jay Leno’s Garage.”

Decades ago, Briggs & Stratton built a one-off, six-wheeled hybrid. Work on the car began in 1978 and was completed in 1980—long before hybrid powertrains became mainstream. But fuel economy was still an important issue in the late 1970s and early 1980s, which is why this car exists. Jay’s guest from Briggs & Stratton, Engineering Technician Craig Claerbout, says the car was built to show that Briggs & Stratton engines could power a car on the highway, they just needed a little help to get there.

The car can be driven using its air-cooled gasoline engine (essentially a lawnmower engine), electric motor, or both, similar to a Toyota Prius and most other modern hybrids.

Unlike a Prius, though, the Briggs & Stratton Hybrid can actually drive relatively long distances on electric power alone, according to Claerbout. He worked on the car when it was new and is now its caretaker.

Those 12 6-volt batteries add a lot of weight, which is why the car has two rear axles. The rearmost axle isn’t powered; it just helps distribute the batteries’ weight over a larger area. And yet the car weighs only about 3,200 pounds, according to Claerbout.

The gasoline engine is a 688-cc opposed-twin from Briggs & Stratton, making just 18 horsepower. It’s coupled to a 4-speed manual transmission from a Ford Pinto. Suspension pieces and the steering rack were sourced from the Pinto as well, to keep build costs down, Claerbout said. The doors, dashboard, and windshield came from a Volkswagen Scirocco.

The car also has a couple of automotive celebrity connections. Exterior styling was done with input from Brooks Stevens—designer of the Jeep Wagoneer and Excalibur. It was also tested by Richard Petty, who got it up to it top speed of 68 mph on a track.\

The car hasn’t been out of Briggs & Stratton’s museum in Milwaukee, Wisconsin, since 1988, but it does just fine on the road when Jay drives it late in the video.

The Briggs & Stratton Hybrid remains an interesting footnote in the history of hybrid cars.