Here they are. Start voting. Which will win? 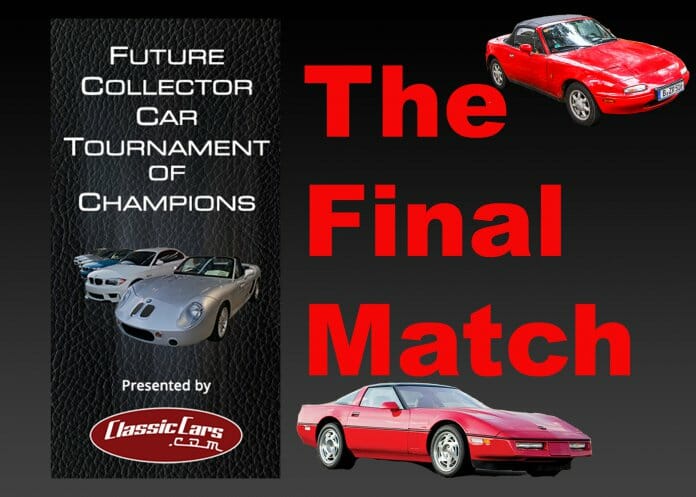 And then there were two …

Readers have wanted the Mazda MX-5 Miata out of this contest from the get-go. Editor, Bob Golfen has consistently voted against the resurrected roadster. But Larry Edsall and Tom Stahler have kept it alive in their votes — and reasoning. Meh, what does Bob know anyway?

But as we picked the finalists, Bob, Tom and the readers chose the Corvette ZR-1, despite being huge Porsche fans – Bob has a 356. Here are the choices, explanations and reader polls. Which will you vote for in the championship?

Tom Stahler: The Prancing Horse makes my heart swell like the essence of Mama’s spaghetti sauce. However, having raced and driven long distances in various incarnations of the MX-5, I keep finding myself coming back to vote for it. Mazda brought the sporty-momentum roadster back to the driving public – and few forms of racing are more entertaining than seeing 40 Miatas going for turn one in an SCCA or NASA road race. Often copied, never duplicated. Zoom-Zoom!

Larry Edsall: I’ve loved the Miata since the first time I drove one, even if it sent me sliding backward at speed on an icy interstate highway early one morning (winter tires were installed immediately, and the car handled the Midwestern winter like a snowmobile). Voting against a Ferrari comes with some misgiving, but the Miata is the epitome of the pure sports car — affordable, compact, not overpowering but so much fun to drive.

Tom Stahler: I LOVE Porsches. I own a Porsche. I’ve raced Porsches – and won! I was close friends with the only American to drive a factory Porsche 917 in international competition (Tony a2z Adamowicz), I go to Rennsport every time. But… in 1990, Chevrolet in concert with the engine builders at Mercury Marine did something spectacular: They turned the blah C4 Corvette into a ZR-1! It was a 375 hp, 6-speed, 180 mph monster for the street. For car people everywhere, the ZR-1 marked the end of the automotive dark ages. Be thankful!

Larry Edsall: I don’t recall driving any Porsche that I didn’t enjoy (and, yes, that includes the Cayenne and Panamera). But I guess I can say the same thing about the various generations of Corvettes I’ve driven. This may be the toughest decision so far, but I’m going with the Porsche.

Bob Golfen: The ZR-1 was a revelation during a dark automotive time, and it still inspires.

Check back on Friday, March 27th, for the results of the championship matchup!