Now come the intense picks. Who will win? 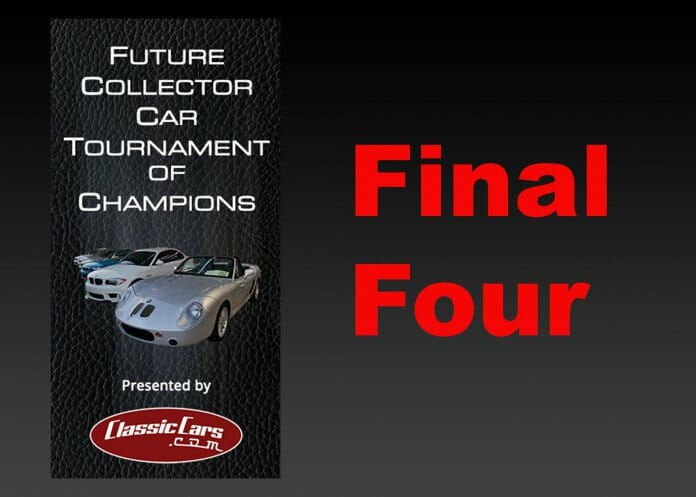 It’s the final four!
The editors and the readers differed twice among the four matchups, allowing the Miata and the Porsche to make the Final Four. Now it’s serious business as we move to the final two pairings for the editors’ and the people’s pick for the Future Collector Car Tournament of Champions.

Here’s how it went down, with our explanations and reader polls:

Tom Stahler: I love the SHO, However I’m going with the beloved front engine Ferrari.

Larry Edsall: Ferrari 599 — I’ve been faithful to SHOtime, but at this stage things get real so the Ferrari is my pick.

Bob Golfen: Sure, the Taurus SHO was a cool exercise in bringing a hot setup to an ordinary front-drive family sedan, but c’mon, the Ferrari beats it out in every possible way.

Larry Edsall: Mazda MX-5 — The last of the Davids advances into a Final Four against the high-horsepower Goliaths.

Bob Golfen: The Japanese muscle car has it all, style, power and agility, and while the Miata has become a modern classic, the GT-R swirls right past it and into the future.

Tom Stahler: The GT2 in its original air-cooled 993 trim still remains one of the hottest cars – EVER! I know it’s a repeat of what I have said previously, but I really love the car.

Larry Edsall: GT2 RS — I have to go with the car that has horsepower and handling.

Bob Golfen: The Porsche and the McLaren are two of the greatest sports/track cars of the modern day, each of them aggressively powerful and awesome-looking. But the Porsche is the one that does it for me.

Tom Stahler: Tough pick, but realizing that the 1990 ZR-1 was one of the cars that rescued us from the hum-drum cars of the late 70s and 80s, gotta take the ZR-1. Sorry Cadillac.

Bob Golfen: Although it’s part of the much-maligned C4 generation, the ZR-1 with its Lotus V8 infusion was a terrific example of sport tuning with a purpose. The CTS might drive great, but it’s gaudy and ugly.

Here are your final four matchups. Don’t forget to vote …

Check back on Wednesday, March 25th, to vote for the championship matchup.