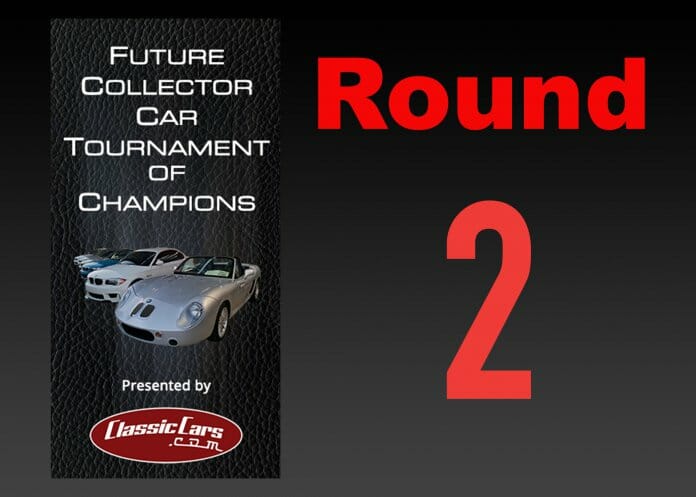 The results of the second-round are in!

The editors and the readers differed almost 40 percent of the time. Some harder choices as we move to choose the final four. You pick yours; we pick ours. The editors’ choice is ultimately the winner in each matchup and clearly, even in some cases, a point of contention amongst ourselves.

Here’s how they fared, and our explanations and reader polls are below …

Tom Stahler: As previously mentioned, the Fox Body never really jibed with me, but a front-engine Ferrari? Well, yes. That’s a winner!

Larry Edsall: Ferrari 599 — I actually hop-scotched around the bracket for this round’s selections. I voted for the Ferrari primarily because I thought at least one Prancing Horse should win this round.

Tom Stahler: When this car was new, I was working in Detroit doing PR work for Special Vehicle Operations at Ford – Remember Michael Kranefuss? I loved driving that car.

Larry Edsall: Taurus SHO — Since I didn’t pick the Fox Body Mustang in Matchup #17, and already had picked a Porsche in Matchup #22, I took the SHO here.

Bob Golfen: The last of the air-cooled 911s stands as the pinnacle refinement of the original.

Tom Stahler: When I pulled the Demon back into the pits after a few laps at Willow Springs International Raceway, I commented to the Chrysler PR guy, “This is the most well-mannered Can-Am car I have ever driven.”

Tom Stahler: Once again, going back to the first generation of the Miata, is there possibly a purer sports car?

Larry Edsall: See my answer for Matchup #17, and as I said in my first-round selections, pound-for-pound, dollar-for-dollar, the Mazda roadster is about as good as it’s ever gotten.

Tom Stahler: the 993 with the GT2 package continues to make it one of the best 911s ever!

Larry Edsall: Porsche GT2 RS — When I used to speak to school groups — or to Detroit engineers — the first question from the audience was always about my favorite cars. I usually offered 3 favorites — any Porsche, the Mazda Miata, and 3 Series BMWs. I had to have a Porsche advancing to the next round in my brackets.

Bob Golfen: The Porsche GT2 RS is a terrific supercar and a high-tech gem.

Tom Stahler: This was a tough one. But opted for the McLaren.

Larry Edsall: McLaren 620R — I’d already voted for the GT2 RS and opted for the McLaren to balance my ballot.

Bob Golfen:  The insanely fast Porsche Carrera GT is like a Le Mans racer for the street.

Tom Stahler: Driven both. After a few laps at Willow Springs in the Caddy with a six-speed manual, I decided that it was perhaps one of the finest sports sedans ever created.

Larry Edsall: CTS-V — My vote came down to my experiences in both cars, and while the Skyline was fun on the track, the CTS-V wagon I drove was pure highway happiness.

Here are your third-round matchups …

Check back on Monday, March 23rd, for the results of the third-round!