Future Collector Car Tournament revs up. Results from the round of thirty-two are in! 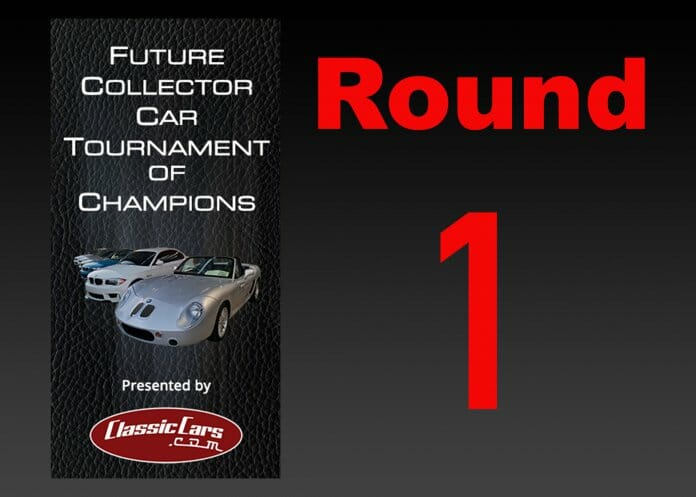 The results of the first-round are in!

The editors differed on a few of the first-round matchups, which made for a lively editorial conference call earlier this morning. Surprisingly, the readers and the editors agreed on all but four – or 75 percent – of the cars in the initial bracket. Here’s where it gets interesting …

Tom Stahler: I liked the drop-top version of the 200SX. I never liked the Fox Body Mustangs. My vote is for the Nissan.

Larry Edsall: I like the Nissan 200SX, but the popular Mustang wins this round.

Bob Golfen: This long-lived series has gained new levels of popularity. Fox Body for sure.

Larry Edsall: Basically, I’m voting against the fact there are two McLarens among the 32 “teams.” Who set up this bracket, the NCAA?

Tom Stahler: I’m a Porsche guy. There is no substitute.

Tom Stahler: Always loved the SHO-boats, particularly with a manual.

Larry Edsall: A vote for Detroit, and for Yamaha.

Bob Golfen: A blowout for the mighty WRX against the largely forgotten SHO.

Tom Stahler: A factory dragster for the modern age. 700+ horsepower, what could go wrong?

Larry Edsall: I think a nimble car beats ridiculous horsepower every time when it comes to fun behind the wheel. It’s the Golf this round.

Bob Golfen: A close one, but the Demon rules with sheer horsepower.

Tom Stahler: I love the GT-R, however, paddle shifting and all-wheel drive pales in comparison to Italian design and a gated shifter, ‘nuff said!

Larry Edsall: Too many Skylines among the 32 finalists but, well, they sure are fun to drive.

Bob Golfen: Another close one, but the rise of Japanese performance nudges out the great Lamborghini.

Tom Stahler: The Lexus is overpriced and heavy. The nimble Ferrari will beat it every time.

Bob Golfen: Fat V8 power up front vs fat V8 power amidships, with balance winning out, along with style.

Tom Stahler: We witnessed the Gen-1 release many years ago. Is there a purer sports car in the modern age? I think not.

Larry Edsall: Pound for pound and dollar for dollar, the Miata is perhaps the best sports car ever produced.

Tom Stahler: Gotta love rotaries! No matter the generation of the car (the last was my favorite) they are just beautifully designed, and sound so unique.

Larry Edsall: See my choice of the Golf R above. RX-7 wins this round.

Bob Golfen: While the RX-7 has been on the rise lately, the Hellcat powers its way to the top.

Larry Edsall: I pick the Porsche, but it’s the 993 you really want.

Bob Golfen: This one starts out strong and will stay that way.

Larry Edsall: A nod to Toyota, but basically, I’ve already voted for two Porsches so it’s someone else’s turn. MR-2.

Tom Stahler: Remembering the great Bruce McLaren. Not the world’s biggest fan of the Bavarian marque. Though I have a few favorites, a tuned 2-series is not even on the radar.

Larry Edsall: At least one McLaren has to advance out of the opening round.

Bob Golfen: The ‘race car for the road’ will always be exceptional.

Tom Stahler: This was the hardest choice. The 1990 ZR-1 was one of the monsters that rescued car culture from the ’70s and ’80s abyss of crappy underpowered cars. The Mercury Marine-developed powerplant was amazing. The C5 body? Meh. I love the look of the 2002. I vote ZR-1.

Larry Edsall: If you’ve ever driven a 2002 you know why I voted as I have.

Tom Stahler: The Carrera GT is a blue-chip car and was an instant classic, but the Viper was the other car (besides the ZR-1) that brought horsepower and design back to a hungry (starving) car culture.

Larry Edsall: Tough decision. I’ve driven both the Porsche and the Viper on racetracks. What impressed me about the Carrera GT was that it was a supercar that still felt like a Porsche, not like some freak from an experimental laboratory.

Bob Golfen: The Viper is cool but Carrera GT is great.

Tom Stahler: I love the CTS-V – particularly with the 6-speed. I would easily take one of these over an M5 any day. This car proved America can build hot luxury!

Larry Edsall: Another vote by default, but the CTS-V you really want was the early station wagon with the manual transmission!

Bob Golfen: The Toyota Supra Mk IV is riding the Fast and/or Furious wave into the future.

Tom Stahler: What can I say? It’s a pure Japanese muscle car that can handle. Would love me a right-hand-drive JDM!

Larry Edsall: The Eclipse is a road-legal rally car.

Here are your second-round matchups …

Check back on Friday, March 20th, for the results of the second-round!