Falling for the Lincoln Continental Convertible with Stuart Wilson

Hollywood stuntman, Stuart Wilson, knows how to make an entrance with this rare, custom hot-rod Lincoln

In the early/mid 60s, the Lincoln Continental Convertible was a high-water mark in terms of style. The influence of this model is as strong as ever, over a half-century later. The Continental Convertible continues as a benchmark in design. Showing up in one of these babies says something about the person that owns one. After all, anyone can get from point A to point B in almost anything with four wheels and a motor. This is more. The Lincoln is about how you arrive!

As good as the original design of the Lincoln Continental is, a few updates wouldn’t necessarily be a bad thing. Tastes have been changing in the decades since it debuted, and technology is forging ahead. It wasn’t that long ago that 16-inch wheels and tires were considered large. Nowadays, those just don’t make the cut. 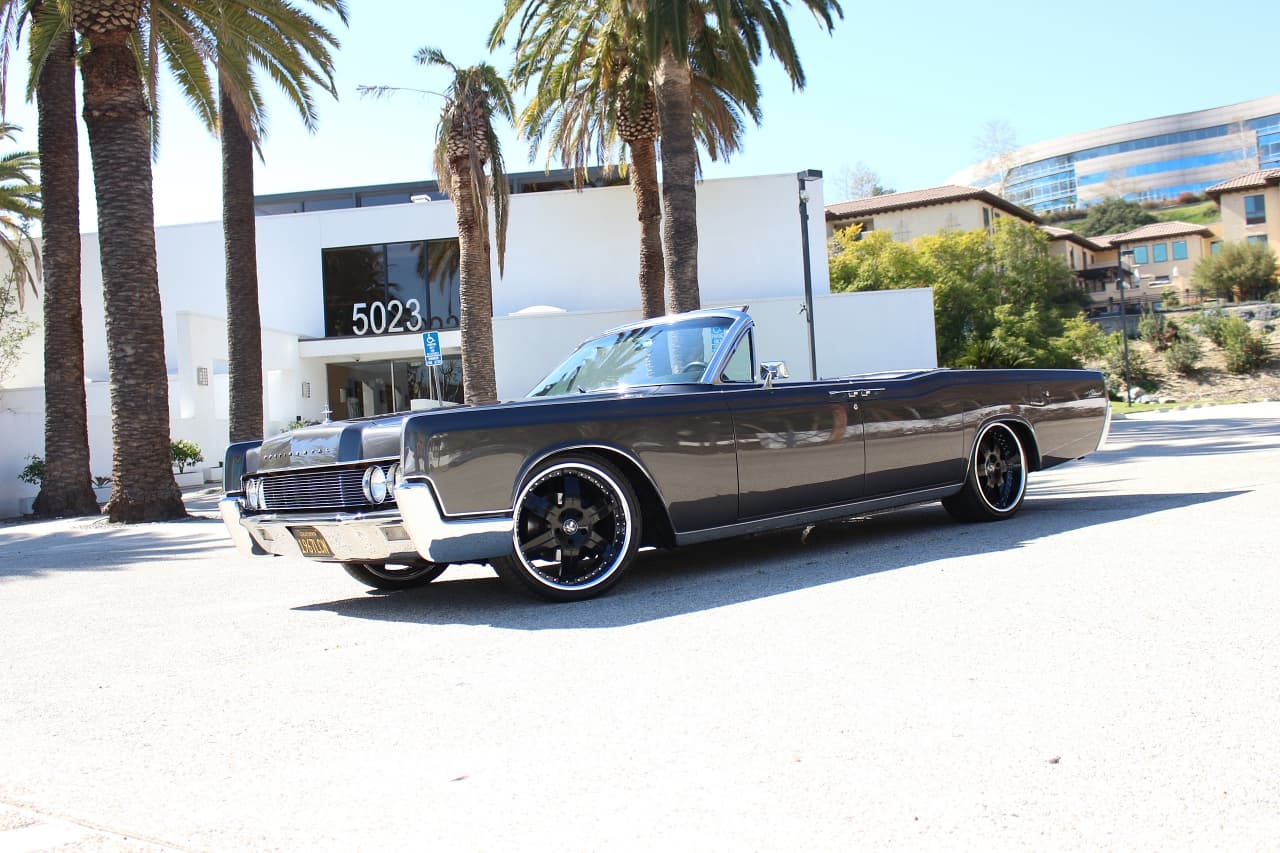 Not all Lincoln Continentals rolled off the assembly line alike. A rarity among those leaving the factory were the Home Office Reserve cars. There was 475 made in ’67. These were a special factory set up for Lincoln (Ford) executives and a few lucky celebrities.

As unique as this model is, an owner wants his own personal imprint. And, in LA LA Land and other swanky locales, you need a splash of something extra if you want to get to first base. A little character goes a long way. 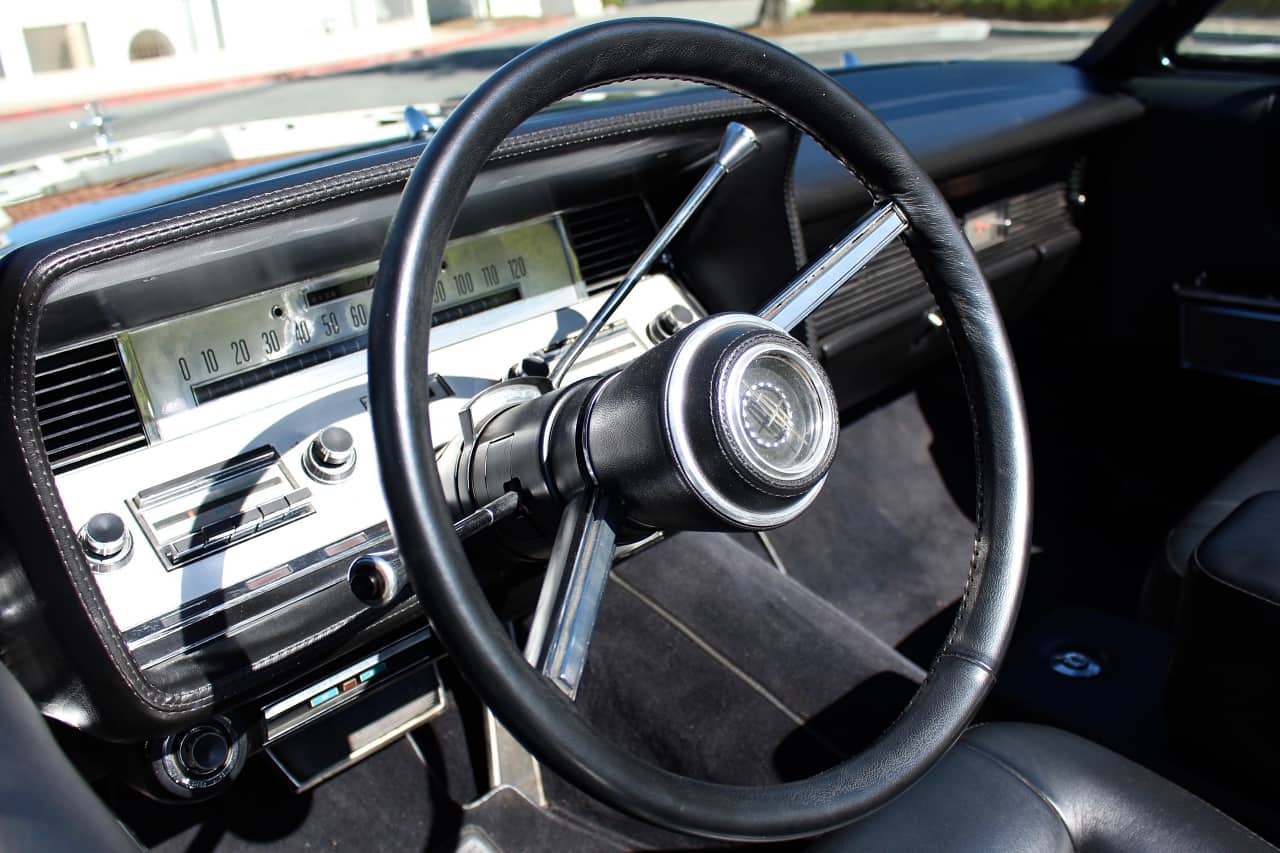 Coincidentally, Stuart Wilson knows a thing or two about character. His day job, as an in-demand Hollywood stuntman, requires him to become one character after another. More often than not, it’s performing the stunts for Bruce Willis. However, Stuart has 60 credits listed on IMDB, which include feature films like Jack Reacher, Indiana Jones and the Kingdom of the Crystal Skull, Transformers: Dark of the Moon, and Live Free or Die Hard.

Perhaps it’s also no surprise that Stuart’s Lincoln Continental Convertible from 1967 simply oozes character. Cars today lack the panache that goes with this monster. Gleaming chromed bumpers on either end cap a massive 19-feet of length. In the sixties, proportions were derived for style, not necessarily for functionality. Sure, today numerous SUVs roam the interstates across the country, yet most maximize their utilitarian mission. 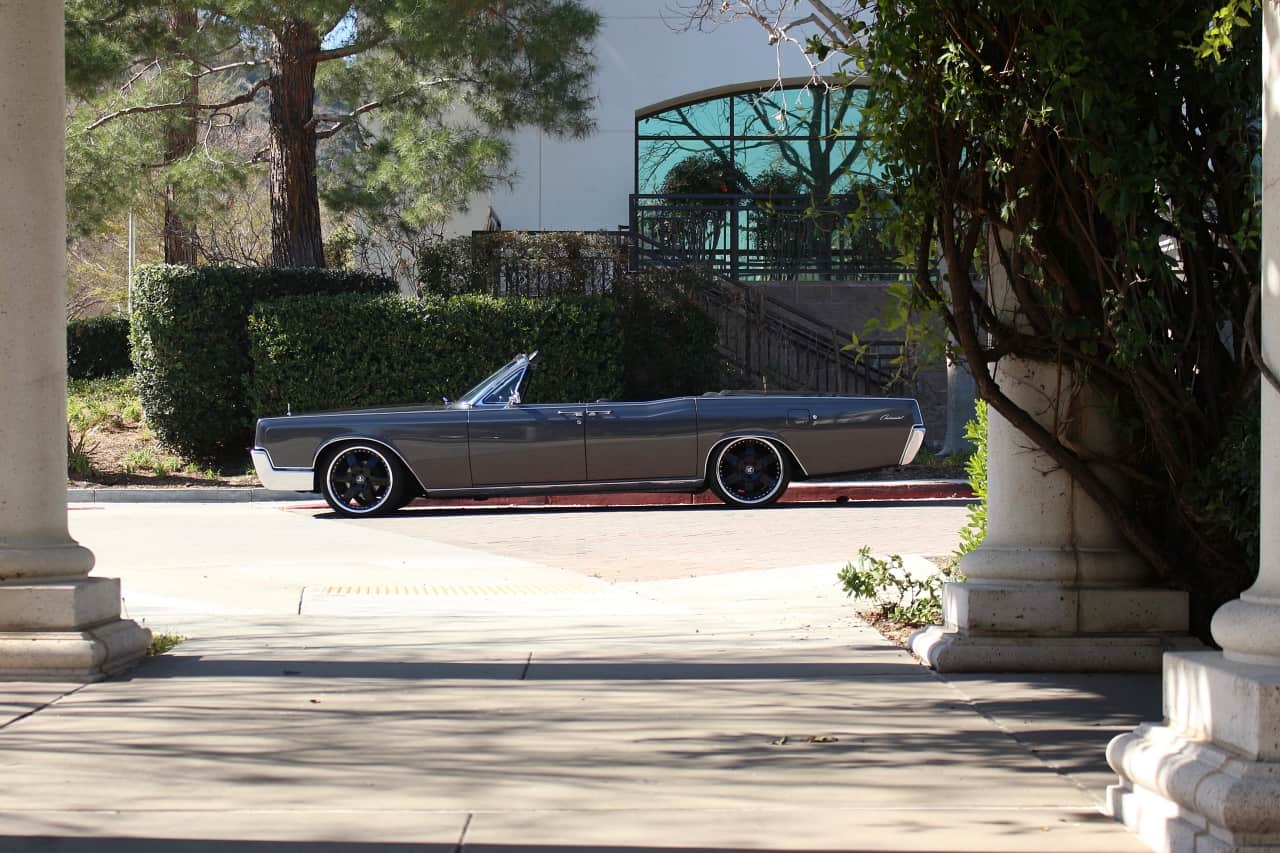 Not to put too fine a point on it, but this Lincoln is a hulk at over 5,700-pounds! The width is a generous 79.7-inches, and the height is 54.5-inches. The wheelbase is regal 126-inches, and it shows. This requires a monster 7.6-liter, V8 pumping out 340 horsepower. Bringing this to a stop are front disc brakes and rear drums. As one might imagine, this doesn’t exactly stop on a dime. Given the material technology of the time, which typically consists of metal, this looks and feels exactly as one expects of a car from this period.

So, what is a Home Office Reserve? Stuart explains, “I had no idea what that was [when he purchased the Continental]. And I was at a Lincoln show, and the head guy at the Lincoln show said that’s why that particular car has pretty much every option known to man on it. Because it was a special vehicle. And it had a plaque on the dashboard with the guy’s name that it was made for. And so, that’s one of the key questions this guy asked me to make sure it was a Home Office Reserve car, which it turns out it was.” 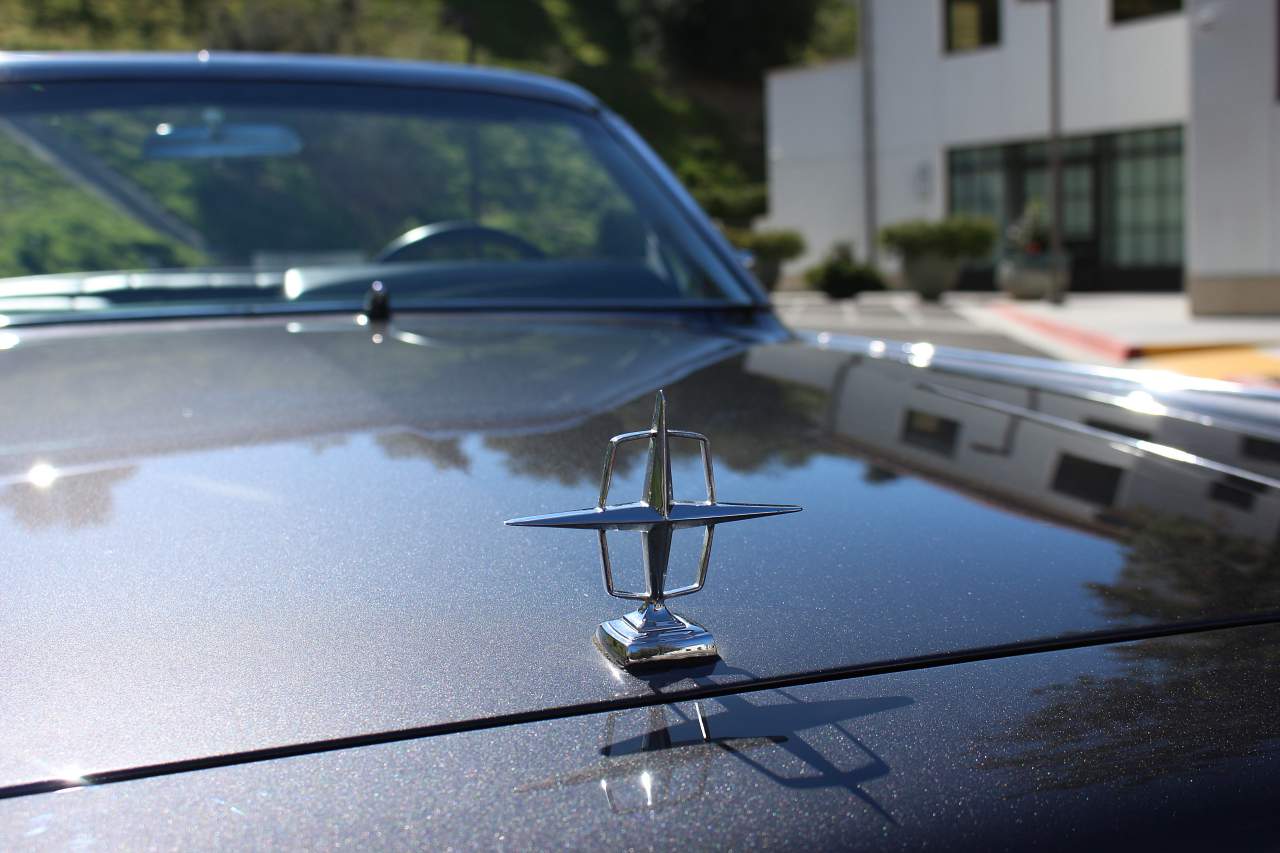 The other features setting this apart from the run of the mill Continentals are bucket seats as opposed to a bench seat in the front, tilt wheel, automatic headlight dimmers, cruise control. “This one doesn’t have it, but it was set up for it, automatic door locks,” according to Stuart. “Which you really don’t need in a convertible. So pretty much everything, other than the door locks that this vehicle could have, it has.”

Now, there are those that take the easy (and often more expensive route) of buying a ready-made classic. But Stuart Wilson isn’t afraid of a challenge. It’s part of who he is. Call it fearlessness, bravery, or maybe he just enjoys a project. While he’s owned this Lincoln for 10 or 11 years, eight of those years were spent on restoration. And, believe it or not, the Continental had just turned 27,000 original miles when he purchased it. After a decade, it only has about 36,000 on the odometer! 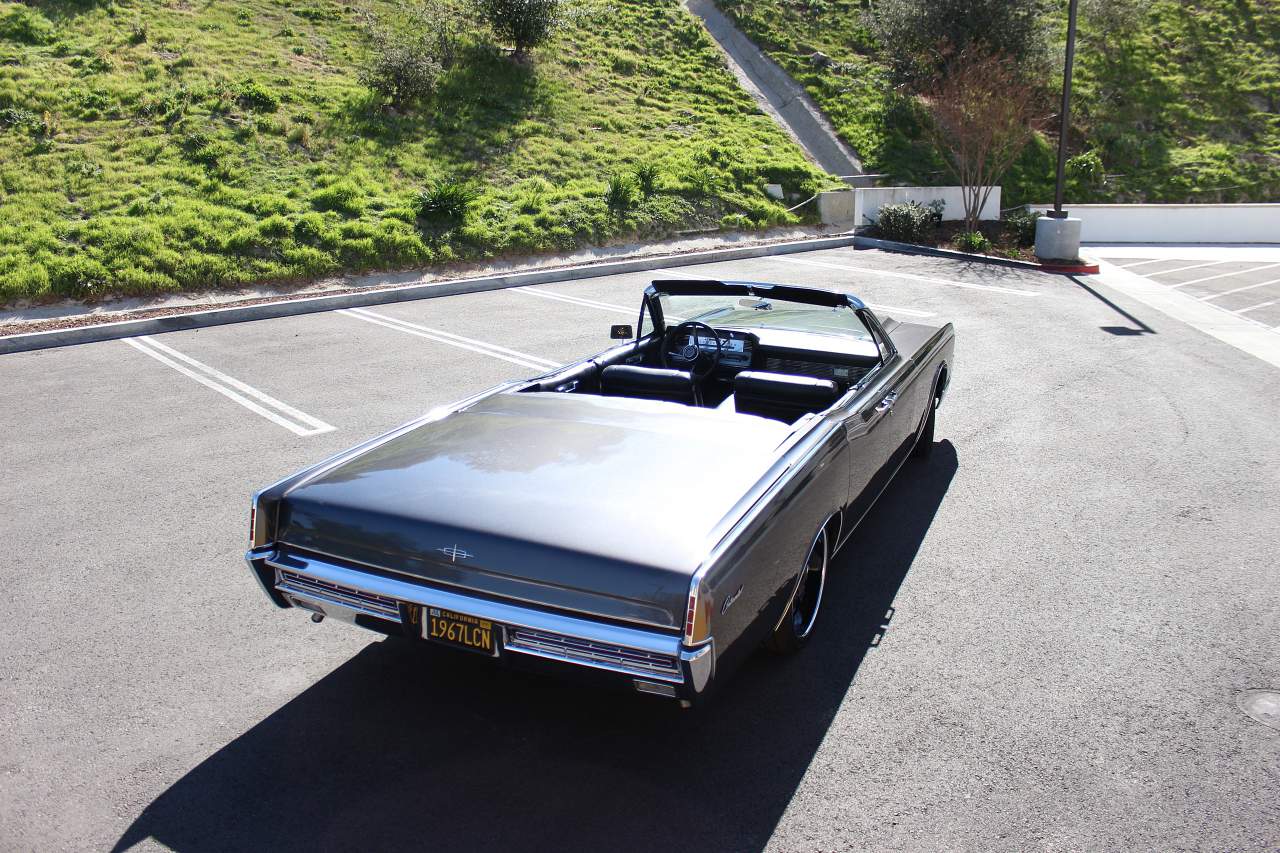 Although the mileage was minimal, the convertible was still over four-decades old. Stuart outlines the restorations and mods, “The vehicle, it was 22 months in paint. It’s got a custom color paint job, if you will. There were two grays in ’67, a light and a dark. I based this more towards the dark gray, except I went with a custom color that I had mixed up. The car sits at stock ride height. All the chrome [parts] are original and [had] been re-chromed and polished. The seats, obviously, have been reupholstered.

“So, I’ve done the paint, the chrome, the upholstery. With 27,000 originally you don’t really need to do anything to the motor. I’ve put a Band-aid on it here and there, and that’s basically it. You know, new top. New mechanisms for the top. All the inner workings of the vehicle, if you will, have been redone,” says Wilson.

Today, it’s easy enough hunting down the car you want on the internet. However, it wasn’t that long ago when the search meant physically tracking it down. In this case, the quest was really a team effort. 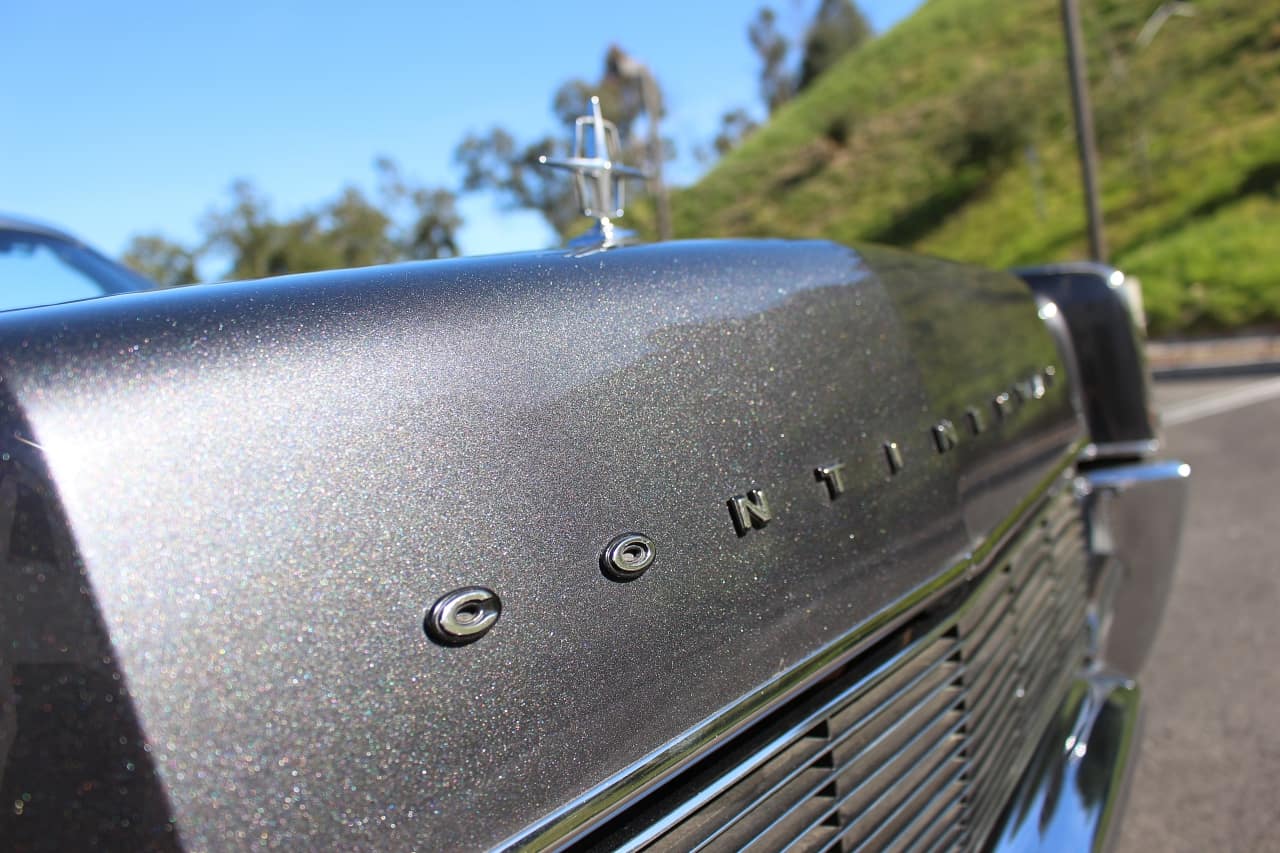 The big screen stuntman sheds light on the backstory, “The Lincoln was a dream car of my daughter. We just were, at a junk yard, if you will, in Glendora, California, looking for a project car. And after about 20 minutes [we] asked if they had the Lincoln, a ’67 specifically, convertible. And the guy said yeah, he did. He’d had it for a month. He walked right to it. Took the cover off. And what I mean by cover, I don’t mean a custom fit cover. I mean a canvas tarp. Pulled the tarp off and there were all the pieces stuffed inside. The car was in primer. It was pretty sad looking when I got it.”

Fast forward to the present day, and Stuart says, “When my daughter’s in town, she lives in Chicago, it’s her car. The rest of the year it’s my car. She is moving back possibly to Southern California, I’d say in six to nine months, and then it will definitely be her car. It will go to wherever she lives at that point and be her car. 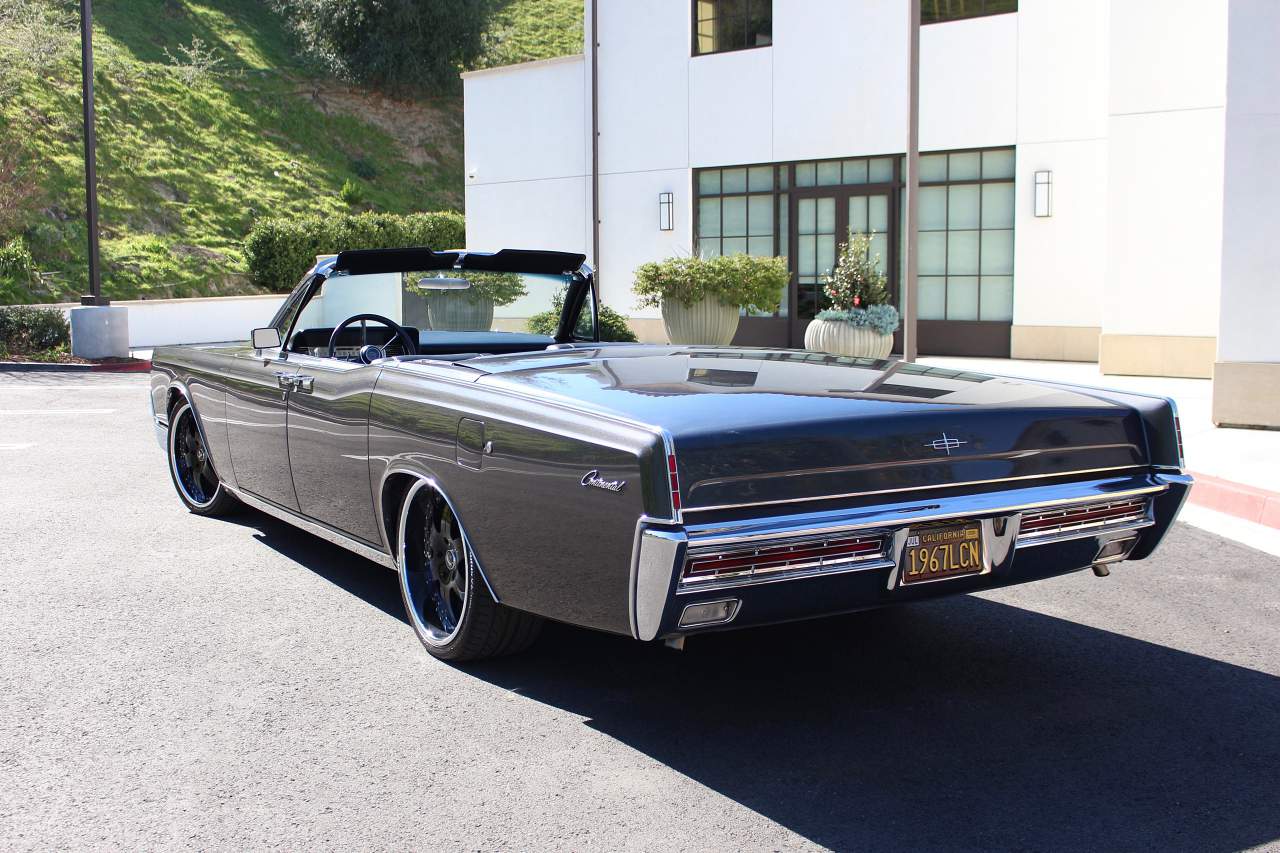 As you can imagine, “Being the caretaker of a classic convertible is great. Especially living in Southern California, going to the beach, driving the coast. Yeah. I don’t mind at all,” mentions Stuart with a slight smile on his face. “I enjoy the fact that it’s a little bit rarer than having a, let’s say, a certain year Camaro that was very popular for a while, or a 911 Porsche, or something that you see all the time. You know, this particular vehicle, you don’t see many of them.”

Now, it isn’t all puppy dog tails and rainbows driving a whale around in a world that’s now drastically downsized. “The biggest problem is it’s a long, long, wide vehicle. Parking is an issue. Parking wouldn’t be as much of a problem had I not spent so much money restoring the car. Therefore, I can’t park it in any parking spot because I have to watch out for who’s parking next to me. Is the spot big enough? You know, when you take a car to this level, you can’t leave it and go to the movies. You just can’t do it. So, that’s a challenge. When I take it out, it’s for driving and driving only. It’s not for driving to a restaurant and leaving it in the parking lot.

Stuart, if nothing else, tells it like it is. So, his honest answer on would he do it all again maybe isn’t entirely shocking, or sugar coated. “No. Not at all,” says Wilson. “I wouldn’t. I liked the end result of this car. But there again, you’re dealing with old technology. The differences I would do, I wouldn’t change color. I wouldn’t change rims. I wouldn’t change anything, except the entire drive train of the vehicle. I didn’t change the drive train because of the low miles. But what I learned with old vehicles is it’s better to put an old body on a brand-new drive train, then try to fix an old drive train.”

Classic cars with rich character bring out the enthusiast in anyone with a heartbeat. However, restoring and maintaining a vintage machine is indeed a commitment in time, money, and effort. Then again, you could drive a car that’s ordinary and, well, boring, or a Lincoln Continental Convertible. Even tough guys will tell you, it’s not a tough choice!

John Grafman
John has spent a decade modeling concept-cars and two decades in the automotive media, and he’s not insane. He got his hands dirty in the design studios of BMW/Designworks, Ford, Hyundai, Kia, Metalcrafters (Chrysler, Dodge, Mercedes-Benz), Mitsubishi, Porsche, Toyota, Wings West, Five-Axis, and more. John continues as the Executive Editor at AutoDesignO. His editorials and images cover everything from Avanti to Rolls-Royce. Styling gets him excited, but that’s only part of the story.