By 1961, much of the C1 Corvette’s looks had been redesigned, but this hopped-up version also features low-end torque

This ClassicCars.com Marketplace featured listing is a 1961 Chevrolet Corvette for sale in Westlake Village, California. This two-tone Fawn Beige (the seller calls the paint color ‘Champagne’) and white paired with a red leather interior is a classic color combination.

The overall styling of the Corvette had changed dramatically during the first-generation C1 series. Those first 300 original 1953 Blue Flame inline-6-engined Corvettes were hand built – with any color combination you wanted — so long as you wanted Polo White with a red interior with a black convertible top. The 1961 had new rear styling with the addition of a “duck tail” and four round taillights, new bumpers and a fine-mesh grille. 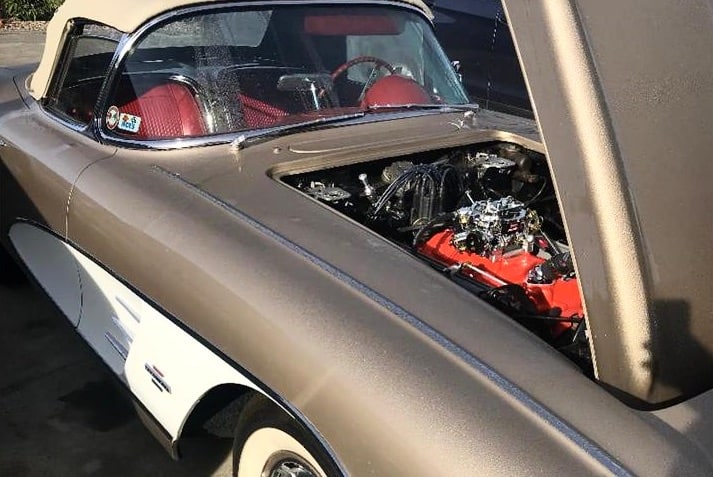 Since 1959 the Corvette featured quad-headlights and a longer, face-lifted body; new interior and dash; louvers on the hood and chrome strips on the trunk lid. In 1960, red and blue bars appeared on the dash logo, with vertical stitching on the seats.

While not a numbers-matching car, this one has been built to have some oomph. The original 283cid small block V8 has been replaced by a 327 four-bolt main, bored 30 over, according to the seller. The engine breathes through a 4-barrel carburetor. The seller also mentions the car has an RV Stage 2 cam. RV cams are designed more for low-end torque than high-end horsepower. This engine is connected to a 3-speed transmission. The whitewall tires and knock-off wheels complete the look.

The Vette also features a Bluetooth radio head unit for hands-free calling and for playing all your favorite music. The seller states that the interior is “all original.”