Pick of the Day is a 1990 Jeep Grand Wagoneer 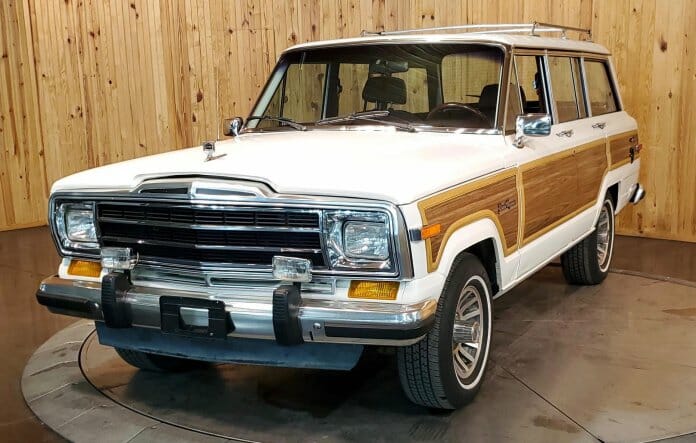 You may have watched the sale on television or read recently about the 1989 Jeep Grand Wagoneer that sold at Barrett-Jackson for an astounding $110,000. While vintage sport utility vehicles have become popular with collectors of late, that 6-figure price paid was the exception, not the rule.

It was the exception because the ’89 model on the block at Barrett-Jackson not only was a 1-owner vehicle, not only still had its original paint but had been driven only 8,000 miles by that owner, and still had its factory-installed tool kit in place — and the original trailer wiring kit was still in its delivery bag.

The Pick of the Day is another Grand Wagoneer from the same generation. In this case, a 1990 Jeep Grand Wagoneer. It is being advertised on ClassicCars.com by a dealer in Lebanon, Missouri, for a seemingly more reasonable asking price of $49,900.

“From 1984 through the end of production in 1991, the Grand Wagoneer had only minor styling changes,” the dealer notes in the advertisement.  “The same body-on-frame construction from the earliest models continued throughout the production run.

“Power was derived from an American Motors 360 cubic inch V8 engine and transmitted to the tires through a three-speed automatic transmission.”

Chrysler purchased American Motors in 1987 but didn’t make any major changes since the Grand Wagoneer was a vehicle without a direct competitor, the dealer adds.

“A few cosmetic changes came about, such as the overhead console ‘borrowed’ from the company’s mini-van lines, but no major changes came about.  Speculation was that Chrysler would replace the carbureted 360 engine with their similar-sized fuel-injected powerplant, but that never happened.”

The dealer notes that, “The 1989 to 1991 Grand Wagoneer models were considered by experts to be the gold standard in the industry for that class of vehicle in terms of fit and finish.  Unfortunately, changing economic times caused gasoline prices to greatly increase and suddenly 11 mpg vehicles became very difficult for dealers to sell.

“Further, new vehicle safety standards mandated by the federal government would have effectively forced Chrysler to completely redesign the vehicle going forward which would have required a huge capital investment.  Weighing all the factors, Chrysler announced in February 1991 that the Grand Wagoneer would not be included in the 1992 model year offerings bringing a twenty-nine-model-year production run to an end.”

Like the one at Barrett-Jackson, it wears Bright White paint and wood-grain trim.

The odometer shows slightly more than 64,000 miles and the dealer believes that figure to be accurate. The vehicle has had only two owners, the first keeping the car from new until the summer of 2016.