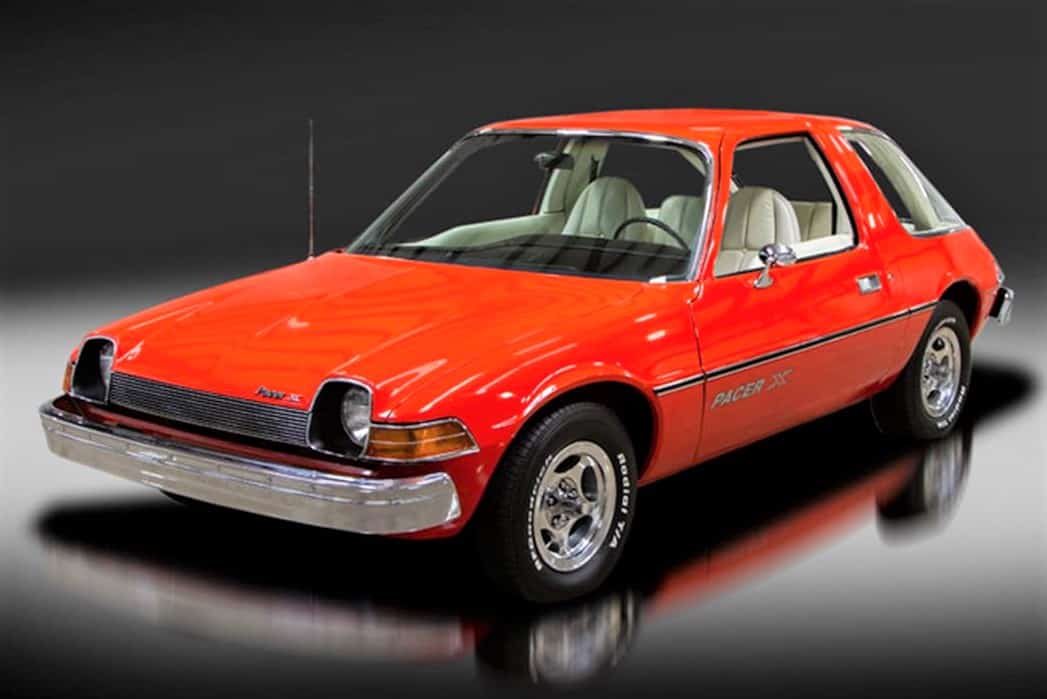 Common knowledge among classic car people is that whatever the vehicle, no matter how homely or essentially rejected, there is a cadre of collectors who absolutely love it.  Case in point: The Pick of the Day, a 1975 AMC Pacer that has been treated to an improbable, over-the-top professional restoration.

The original fishbowl on wheels is more often considered a punchline than a serious collector car.  One was used as Garth’s Mirthmobile, sporting ironic fender flames in the comedy film Wayne’s World. This year’s ugly Christmas sweater from Hagerty features a Pacer front and center.

Yet still, there is something strangely appealing about the Pacer, created as a revolutionary modern car by AMC’s design chief Dick Teague.  As with most offbeat designs, the Pacer sparked controversy between those who thought it was super cool and those who were shocked and appalled.

Though it might seem strange, this sparkling red Pacer was treated to a “comprehensive no-expense-spared restoration” by its third and latest owner, according to the Seekonk, Massachusetts, dealer advertising the car on ClassicCars.com.  The work included replacing the yards of glass with new PPG glass, which must have cost a pretty penny in itself.

Aside from being brought back to showroom condition – although it’s unknown whether it was originally a sporty X model – the car has only 24,975 miles on its odometer.  So yes, this is an unusually special Pacer that seems to have landed among appreciative friends.

“The exterior body is super straight with great gaps throughout,” the dealer says in the ad.  “The car was repainted red which is a gorgeous color and fits this car well.  The paint quality is absolutely stunning and ocean deep.

“Everything on the exterior was restored or replaced such as the stainless window trim, rubber seals, antenna, chrome mirror, bumpers, door handles, headlights, taillights, etc. The exterior of this car is truly remarkable!”

The black-and-white interior also has been thoroughly refurbished, the ad says:

“Everything in the interior was restored or replaced.  The interior of this car is also truly remarkable!”

The Pacer is powered by its original 232 inline-6 engine, which has been rebuilt, mated with a 3-speed manual transmission.  The engine compartment and underside are detailed, and the brakes and suspension have been done, the dealer notes.

The asking price is $28,900, which most likely would not nearly cover the cost of a pro restoration.  A true labor of love, and hopefully, someone else will feel the love and see the beauty that lies within this “truly remarkable” Pacer.