A new motorcycle created in a partnership between British brands Aston Martin and Brough Superior was unveiled Tuesday at the Milan Motorcycle Show in Italy.

The AMB 001 is a track-only, 180-horsepower superbike that “represents the union of iconic Aston Martin design and state-of-the-art Brough Superior engineering to create a piece of automotive art for the motorbike connoisseur,” according to an Aston Martin news release. 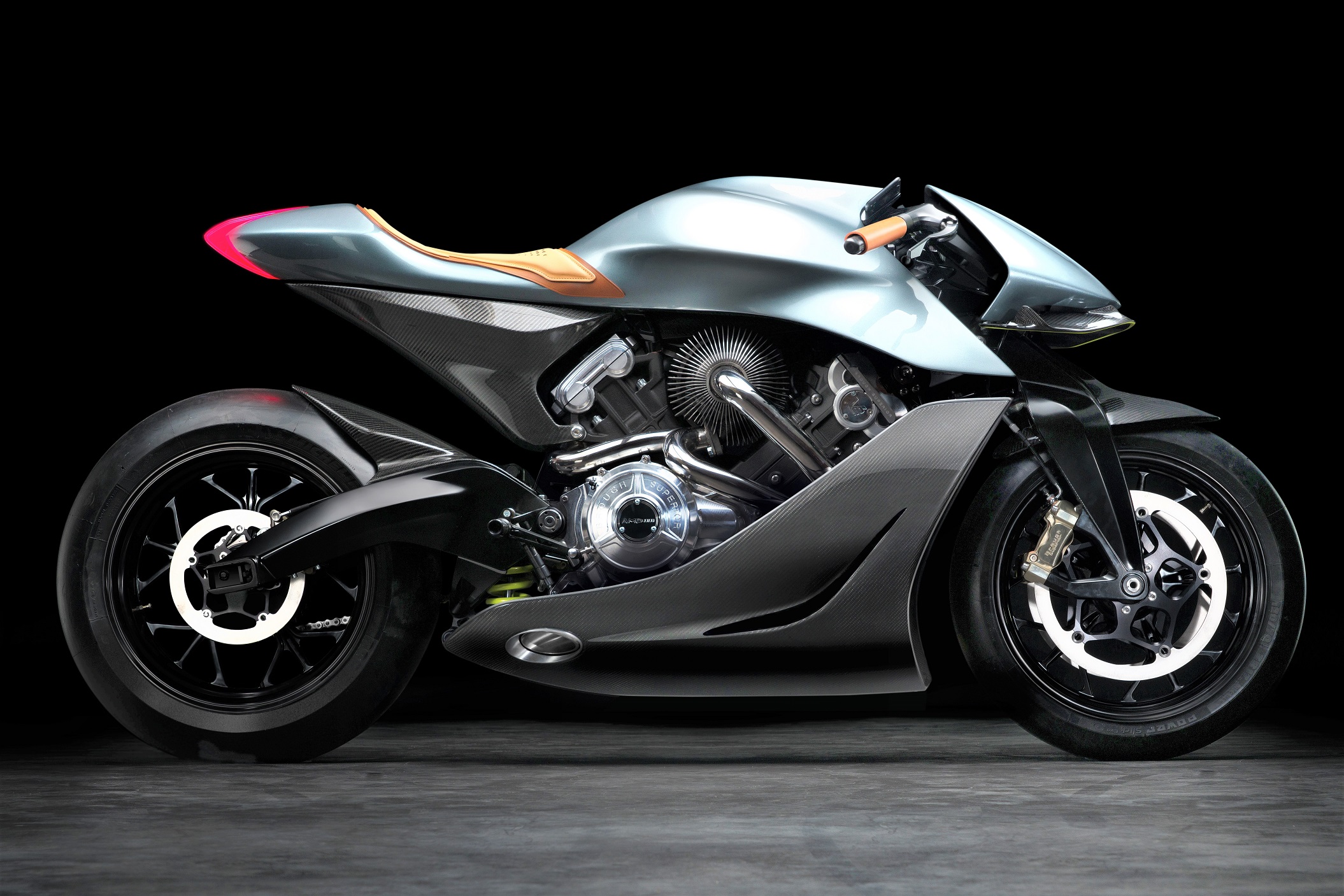 “This is what we believe a cutting-edge motorcycle should be, and we are very proud to see the Aston Martin wings on a motorcycle for the first time,” Marek Reichman, the luxury automaker’s executive vice president and chief creative officer, said in a news release.

“In addition to applying the skills we have developed for cars such as the ground-breaking Aston Martin Valkyrie, we have also been able to bring our special expertise in the traditional craft techniques to this project. The finished product is a truly beautiful motorcycle; a design and engineering work of art.”

Presented in Aston Martin’s traditional colors of Stirling Green and Lime Essence, the AMB 001 in a modern lightweight design with the elegant touches of the Aston Martin luxury car brand.  Just 100 examples of the motorcycle will be built. 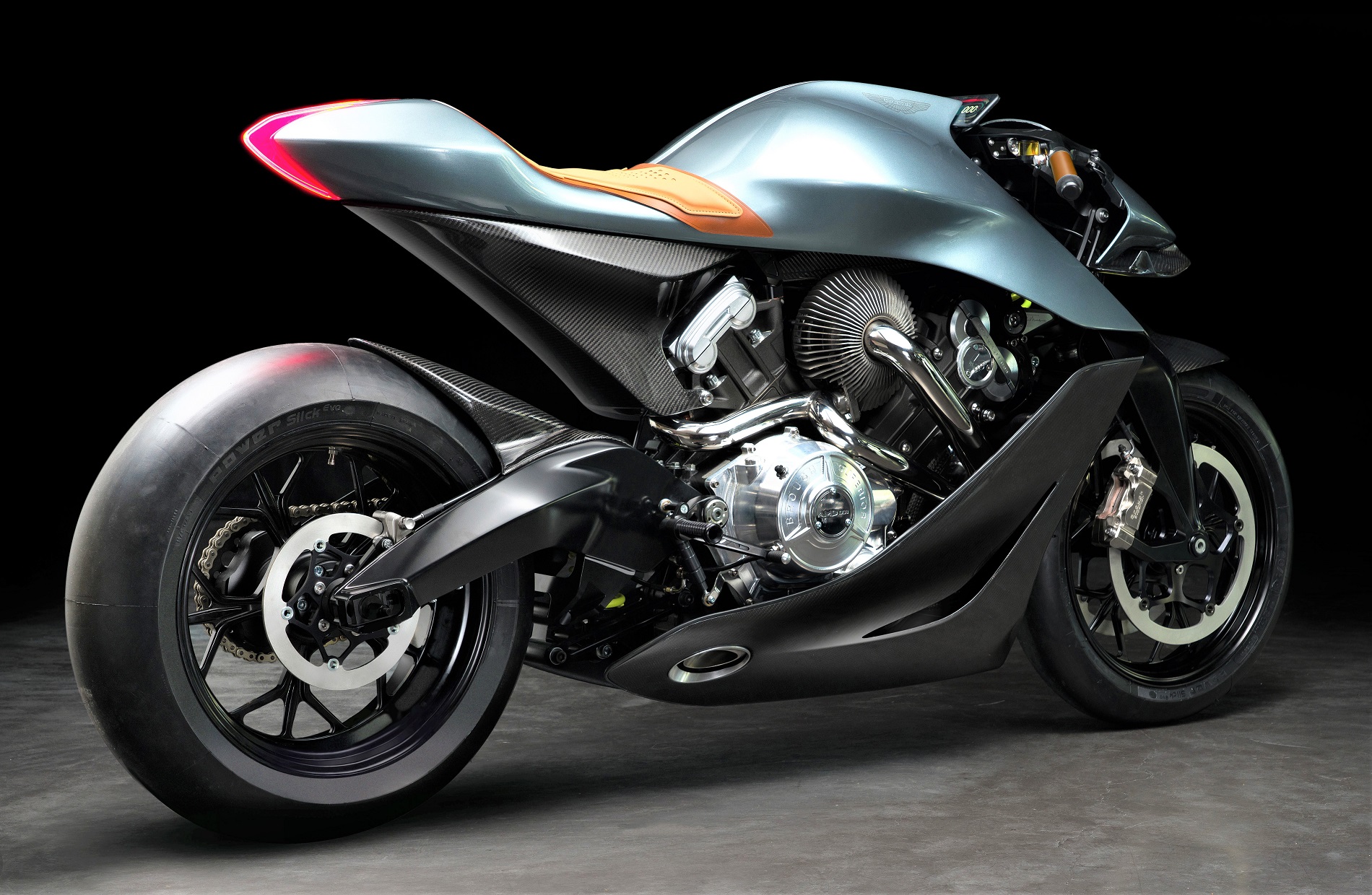 “The AMB 001 features a sublime combination of paint and bare carbon fiber that accentuates the lines of this collectors’ item,” the release states. “As befits the Aston Martin and Brough Superior brands, all of the components have been specially designed using the best processes and materials, including carbon fiber, titanium and billet aluminum.

“The bike boasts a strong, sculptural body form, beautifully accented by a carbon fiber fin – the design of which is derived from the side strake on Aston Martin cars – that runs along the full length of the Stirling Green tank, passing under the saddle and out onto the rear, creating a flowing form along the top of the bike.

“As the fin passes under the saddle it can be seen through breaks in the Oxford Tan leather pads of the hand-stitched saddle, which combines old techniques and modern technology in one swooping area that is a perfect fit for the human form.” 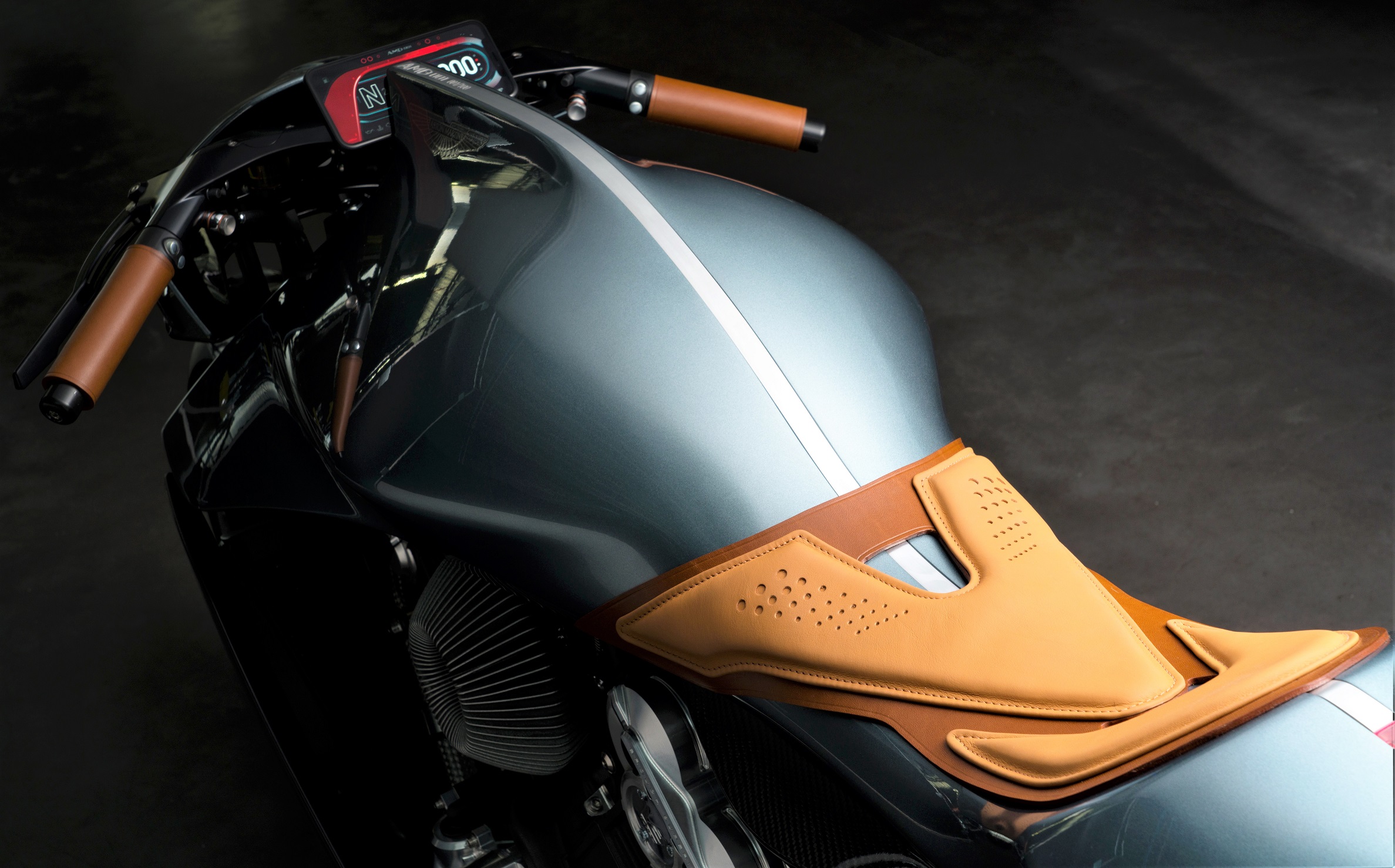 The bike, which weighs less than 400 pounds, is powered by a turbocharged engine in the classic V-twin configuration of Brough Superior engines when “the Rolls-Royce of motorcycles” were built prior to World War II.

The Aston Martin wings logo is the same as that on the Valkyrie, made ultra-lightweight in stainless steel that’s just 9 microns thick.  Aston Martin’s design team was instrumental in creating the unique motorcycle, according to Reichman.

“Aston Martin may be 106 years-old, but the forward momentum of this company is inspiring for every area of the business, but for Design in particular,” he said.