The Central Hall at the Las Vegas Convention Center is a massive cavern, large enough that during the annual SEMA Show of automotive vehicle and parts producers, it absorbs huge displays by Ford, Chevrolet and Toyota, slightly smaller showcases by Honda and Hyundai, as well as those by the major automotive paint producers, the historic aftermarket companies such as Edelbrock, Meguiars, Coker, and dozens more, and yet there still is room for a couple hundred or more companies to display their wares.

But this week, the entire Central Hall is filled by a single company as Mecum Auctions prepares to offer around 1,000 vehicles, hundreds of items of what Mecum calls “Road Art” and for the first time, more than two dozen historic and collectible guitars, at what will be its third annual Las Vegas collector car sale.

Mecum also stages an annual Las Vegas motorcycle auction each January at the South Point casino/resort a few miles south on The Strip.

Which is just what Mecum does each May at the Indiana State Fairgrounds and then nearly doubles again each winter with its ginormous — and world’s largest — collector car auction not far from Disney World at Kissimmee, Florida.

Mecum Auctions are a sort of an amusement park for the car- and automobilia-collecting community, and this week at the Las Vegas Convention Center, the company also is offering its inaugural Guitar Search By Domino, offering 25 vintage acoustic and electric instruments, some played by very famous musicians, for live bidding on Saturday (though online bidding already has begun).

But before the guitars are paraded across the auction block, bidding begins Thursday at 8:30 a.m. on Road Art and at 10 a.m. on collector vehicles.

With cars still arriving, we toured the Central Hall on Wednesday and selected our favorites: 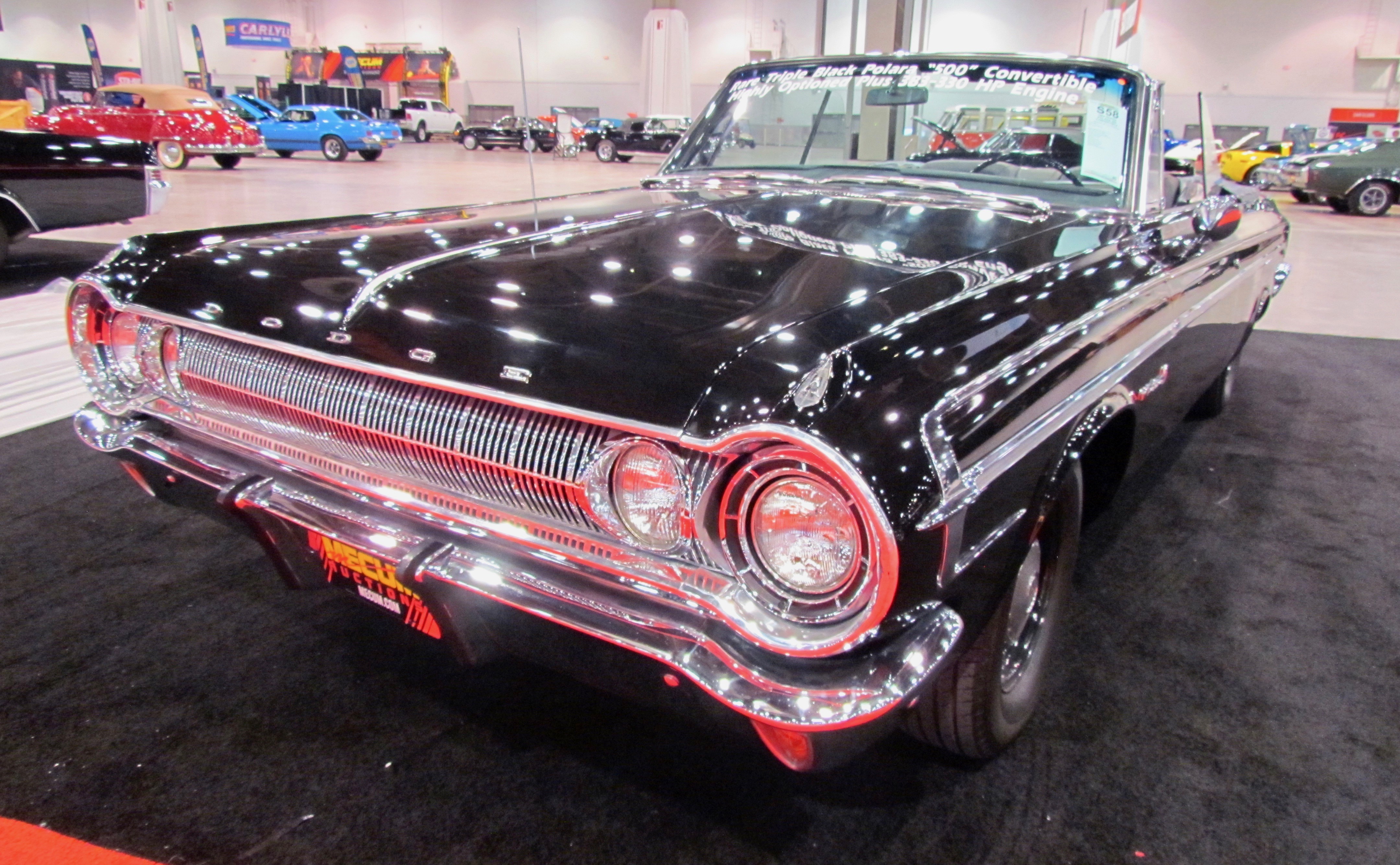 Because they are hard to photograph, I usually avoid picking black cars for these pre-sale features. However, this triple-black beauty couldn’t be overlooked. The automatic transmission backing up a 383cid V8 engine would seem to make it a nice boulevard cruiser, especially since the car has been enhanced by the presence of power steering and a power-operated convertible top. Power disc brakes are a nice touch as well. 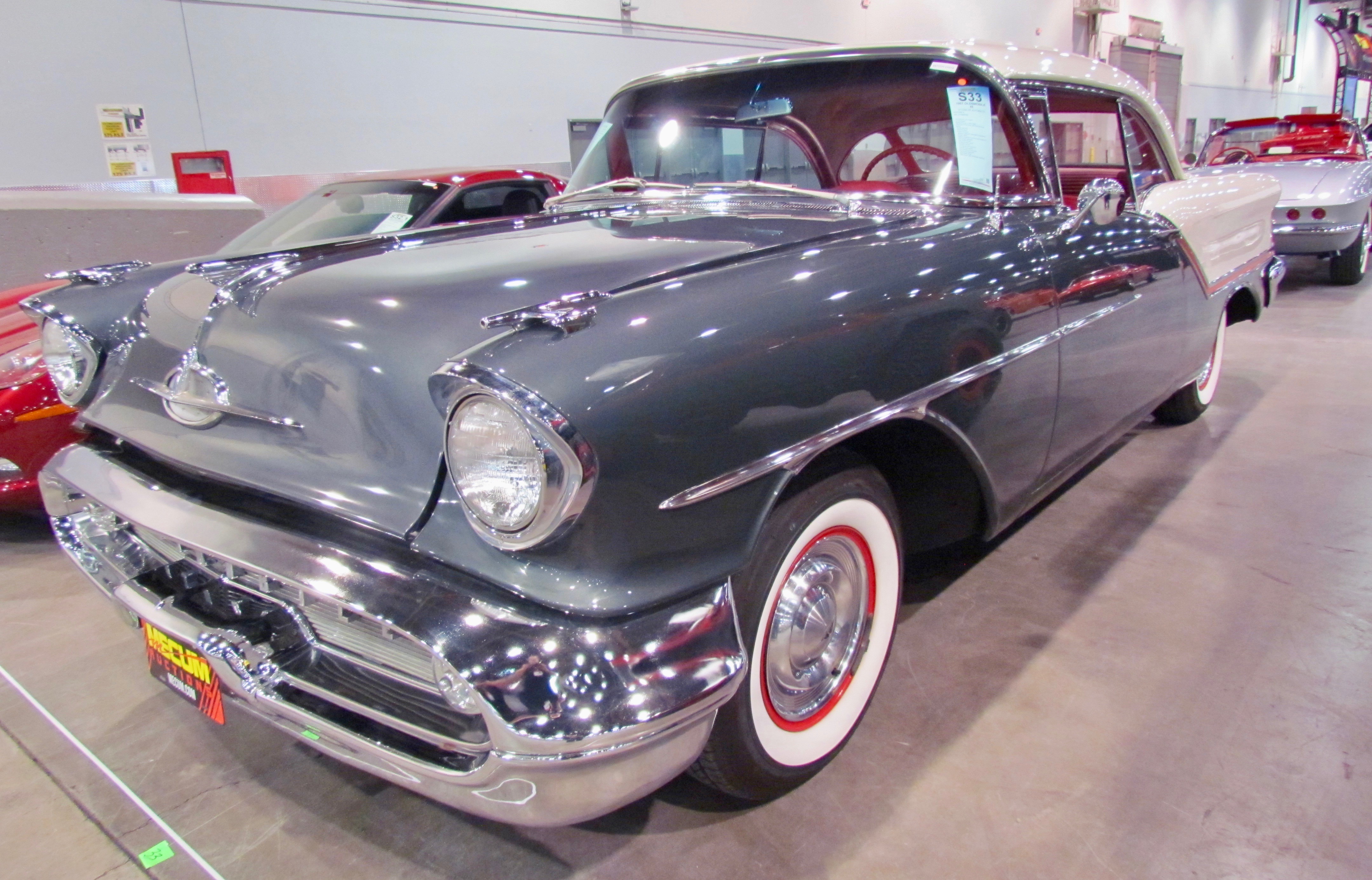 Speaking of cruising, this updated 2-door ’57 Olds in gray and white over a red-and-gray interior also would seem a pleasant way to travel, what with a 371cid V8 with the J2 option of a trio of 2-barrel carburetors. The car also has a Jetaway automatic transmission and power steering and brakes. Rear fender skirts come with the car and mounted beneath the curved rear quarter windows they’d enhance the car’s cool. 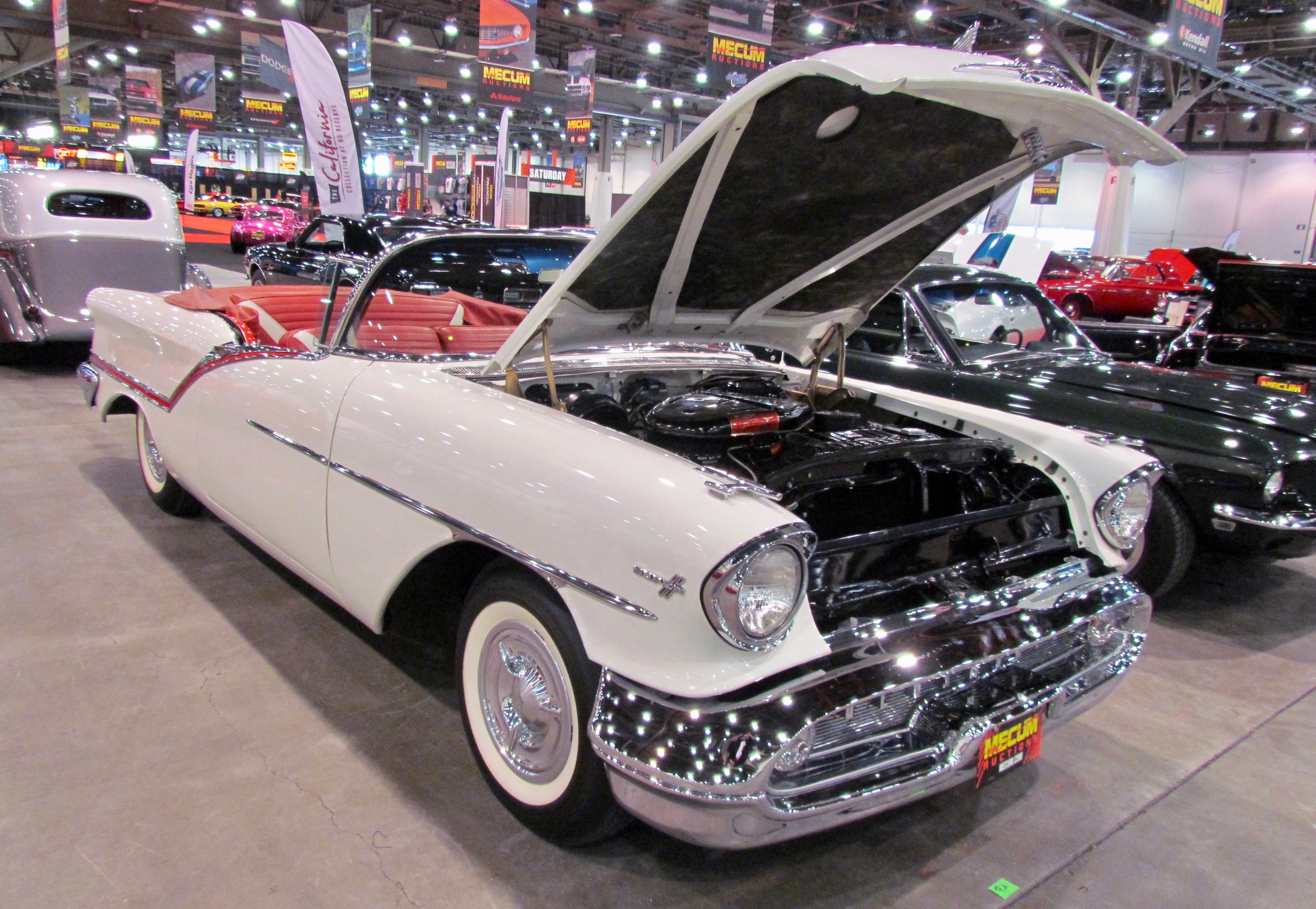 Or perhaps you’d prefer your ’57 Olds with a convertible top? This restored one has a 371cid V8 — also with the J2 option — with power steering and brakes and a power top. 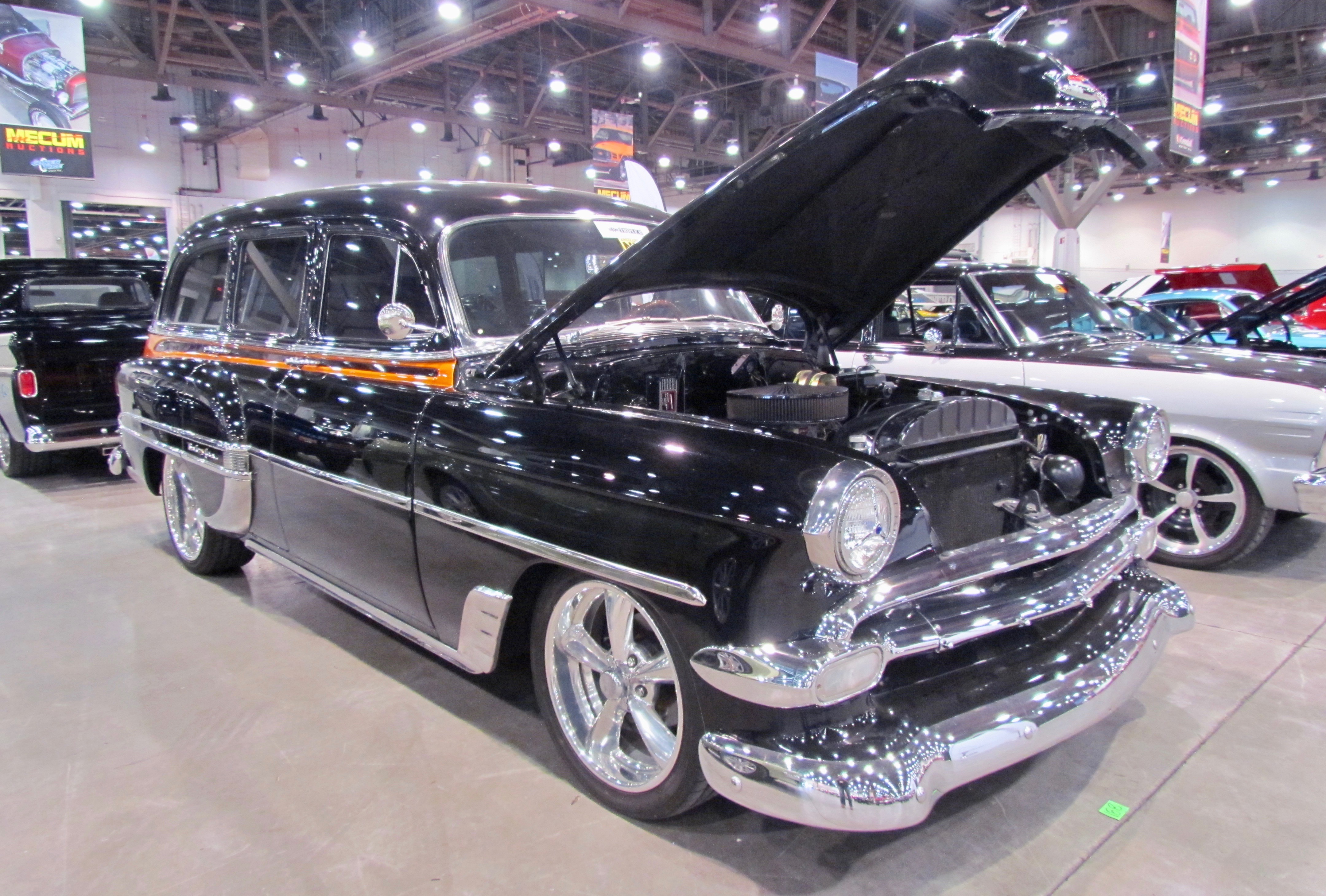 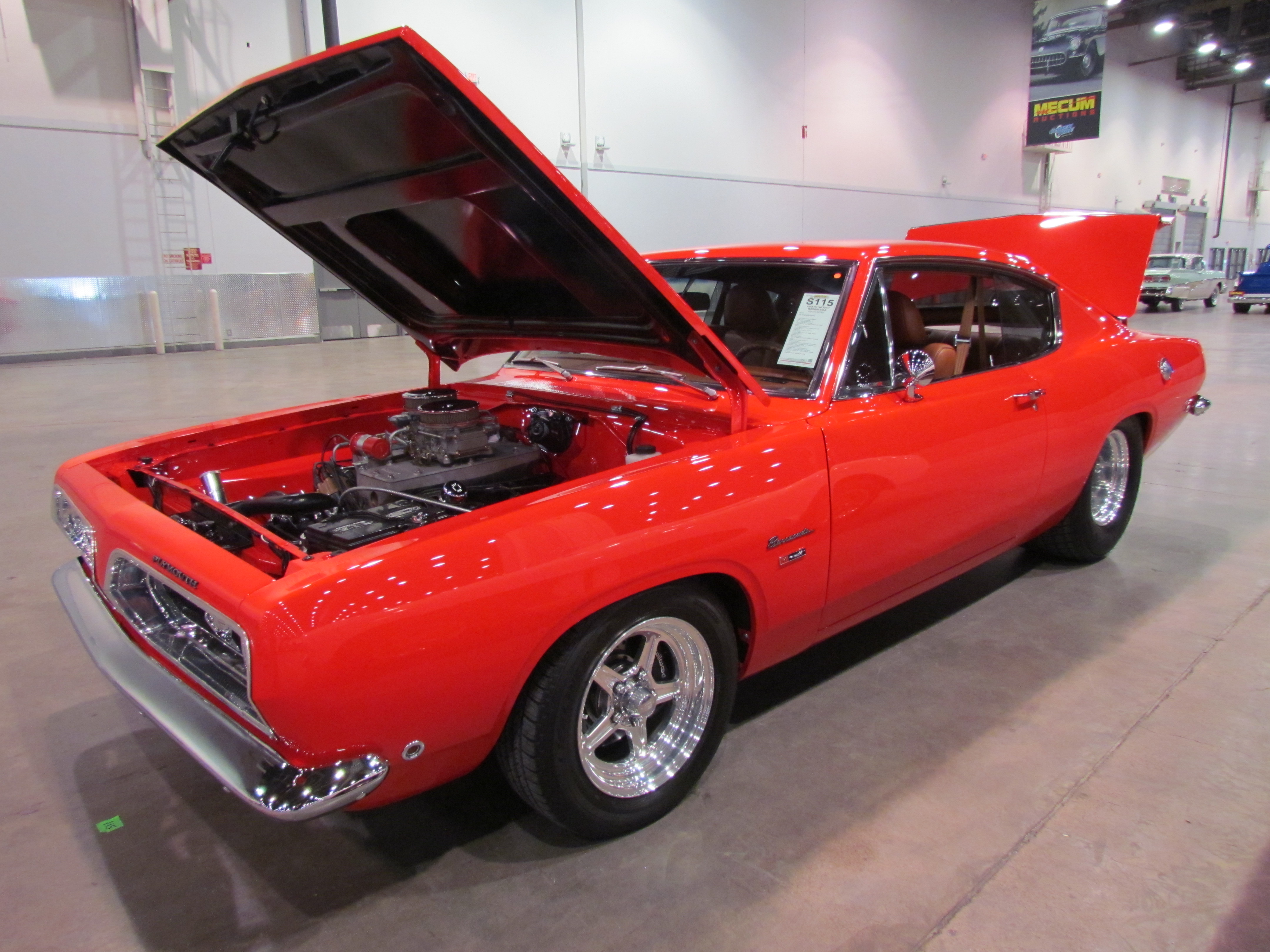 Funny how there are cars we may not have appreciated much when they were new but we now enjoy through more mature eyes. For example, this sleek ’68 “Baccaruda,” as we used to call them. This one has been restored with a souped-up 426cid Hemi V8 and TKO 600 5-speed gearbox, aftermarket suspension, Dana 60 rear and Positraction. Inside: Vintage Air, modern audio, power seats from an SRT8 and more.

Here’s another car that wouldn’t have turned my teen-aged head but decades later deserves a second look. It’s a ’65 Plymouth Valiant Signet (Signets came with bucket seats and other upgrades). This one reportedly has been driven only 18,000 miles on its 273cid 6-cylinder engine. 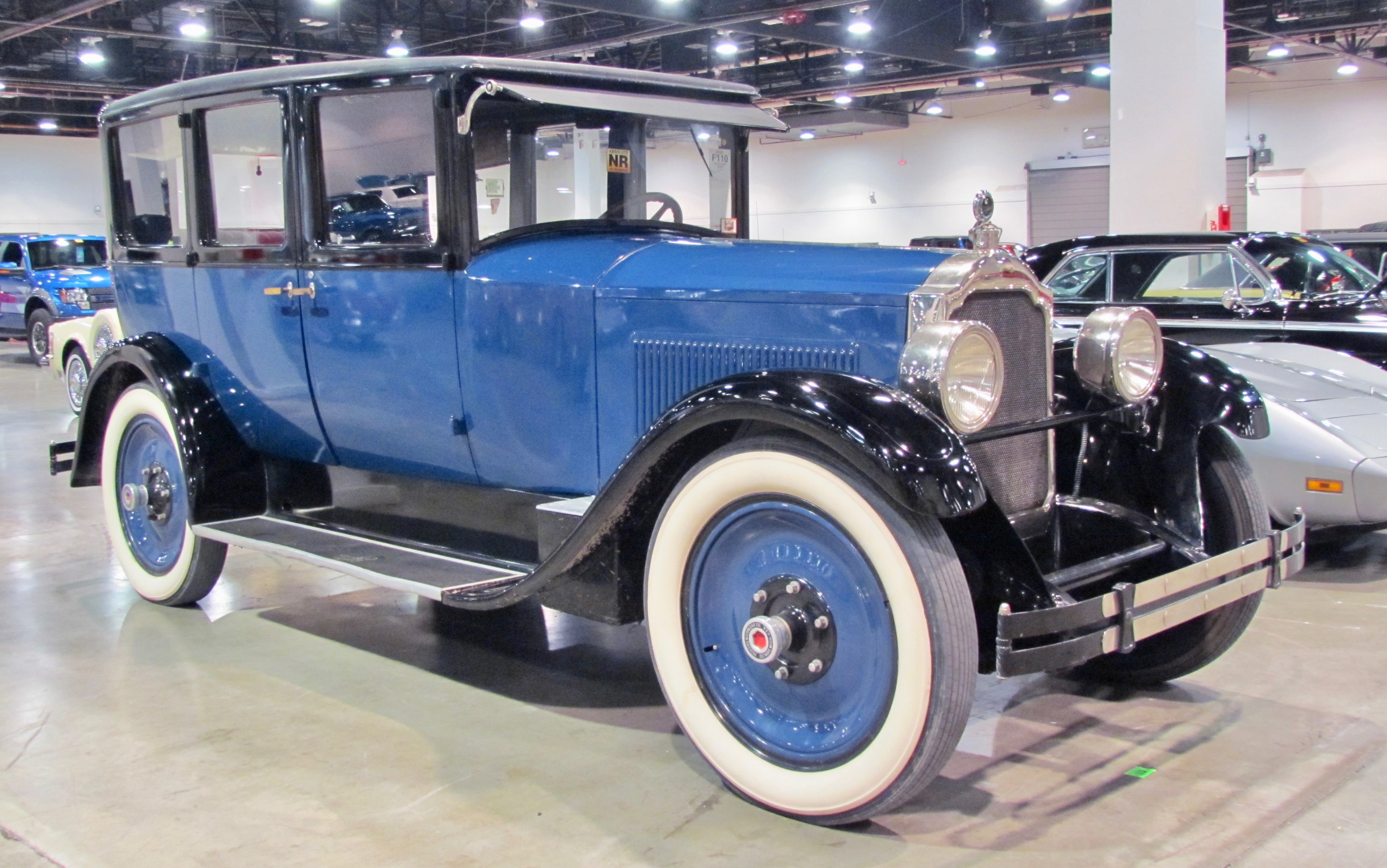 This prewar classic stands out among the low-slung muscle cars on the docket and on the auction floor. It has a 6-cylinder engine and 3-speed transmission, and is believed to have been driven only 19,000 miles since new. 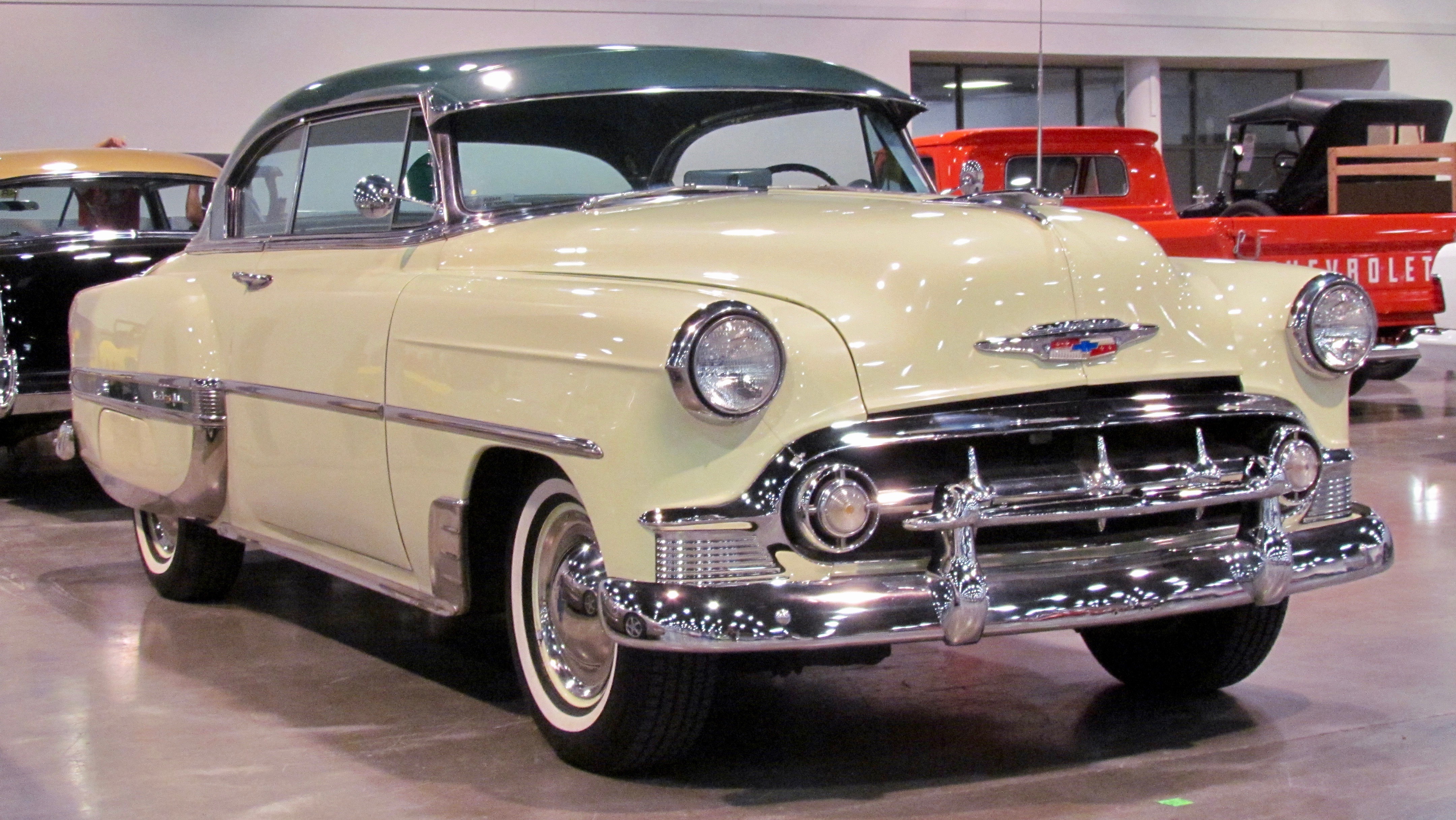 As if the green-and-cream color scheme doesn’t attract enough attention, the Fulton sun visor and a set of rear fender skirts add visual value to this post-war Chevy with a 235cid Blue Flame 6 and 3-speed manual.

From a similar era but with a very different design comes this Caddy cabriolet, the first year for the Eldo and this one still on its original wire wheels. The online auction description says the Aztec Red paint matches the car’s factory color, though it has been applied in triple coat and buffed to a high sheen. It also says the interior was redone to the tune of $13,000, the convertible top is new and the chrome has been redone. 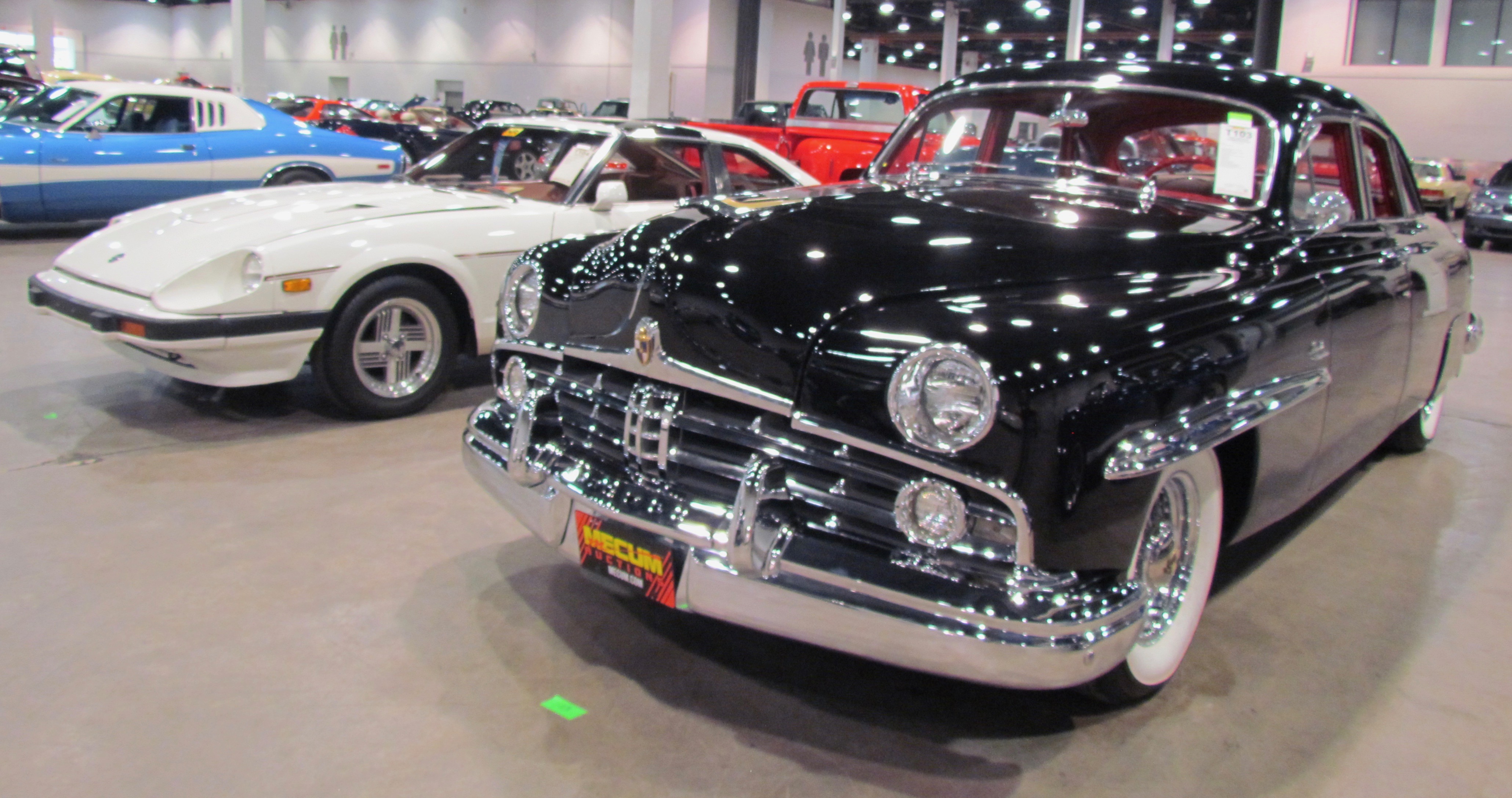 I group these two because they were parked side-by-side in juxtaposition because the Nissan will follow right behind the Lincoln as they cross the block. They offer a real contrast in purpose and design and would be an interesting tandem in a garage. The Cosmo’s 337cid flathead V8 has dual carbs and has been upgraded with high-rise aluminum intake.  The car has air conditioning, dual exhaust, power windows, fender skirts and chrome wire wheels. The T-topped Nissan has a turbocharged 6-cylinder and automatic transmission and 2+2 seating.

This Soviet-era motorcycle and sidecar were restored in Ukraine and come with ropes, shovel, spare fuel can, ammo and hand-grenade canisters, inactive machine-gun and even the mannequin. Speaking of mannequins, that’s not really President Trump in the red MAGA hat checking out the Russian soldier, just a mannequin that looks like him. 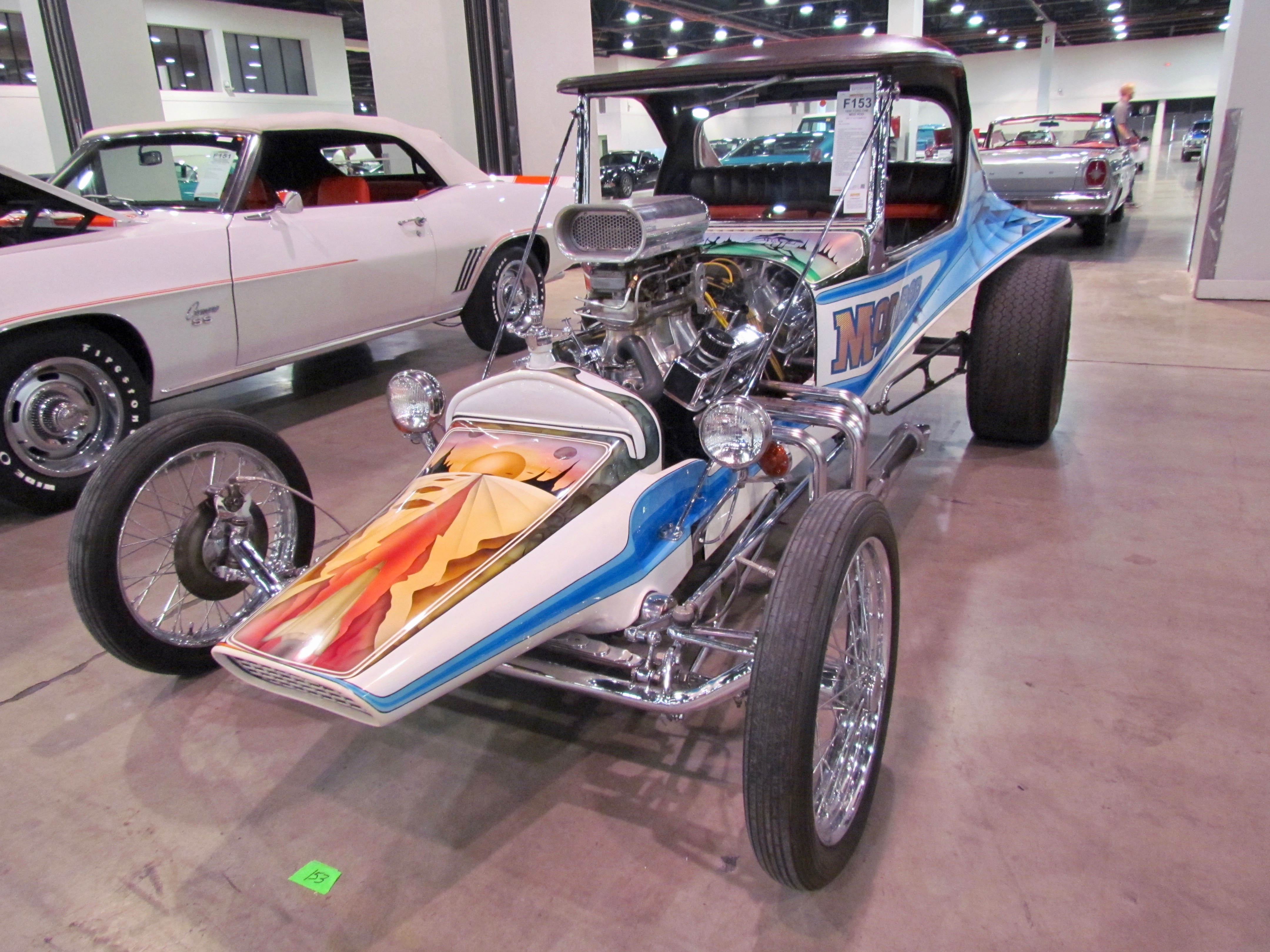 Another fun ride figures to be this fiberglass-bodied T-bucket hot rod by Mike Haas that was part of the Blackie Gejeian Collection. The rear part of the bodywork is from a C3 Corvette, but with ‘Cuda tail lamps. If the nose looks like it came from a go-kart, that’s becuase it did. The engine is a 350cid linked to an automatic transmission. 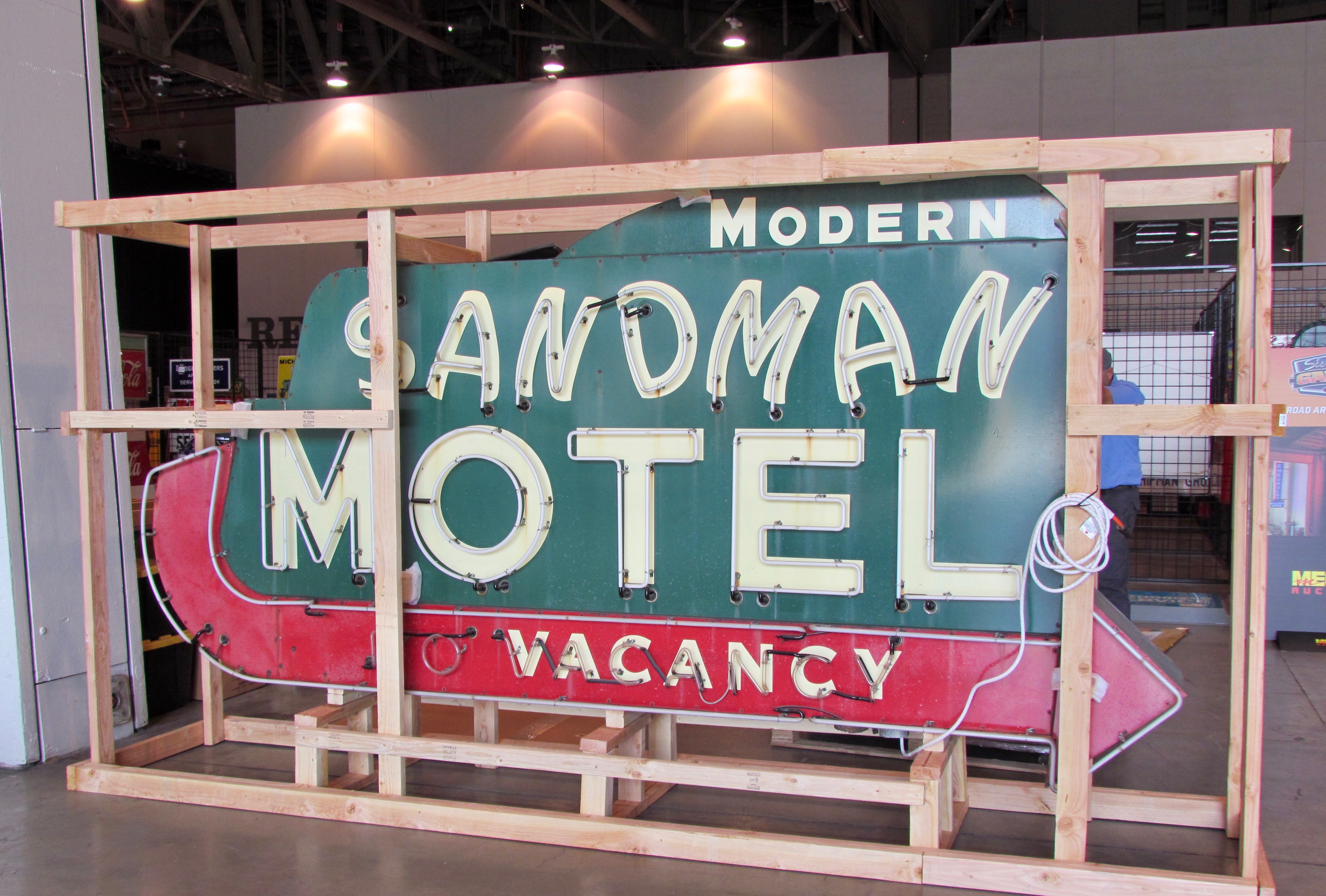 One of the stars of the Road Art sale is this large — 13 feet tall and 22 feet long — 1950s-era double-sided porcelain and neon sign from the Sandman Motel. It’s great if you have room. However, if you have room (for guests, if not for such a large sign), there’s also this smaller — 30 X 56 inches — single-sided, porcelain and neon 1950s HOTEL sign that will be offered at no reserve on Friday.