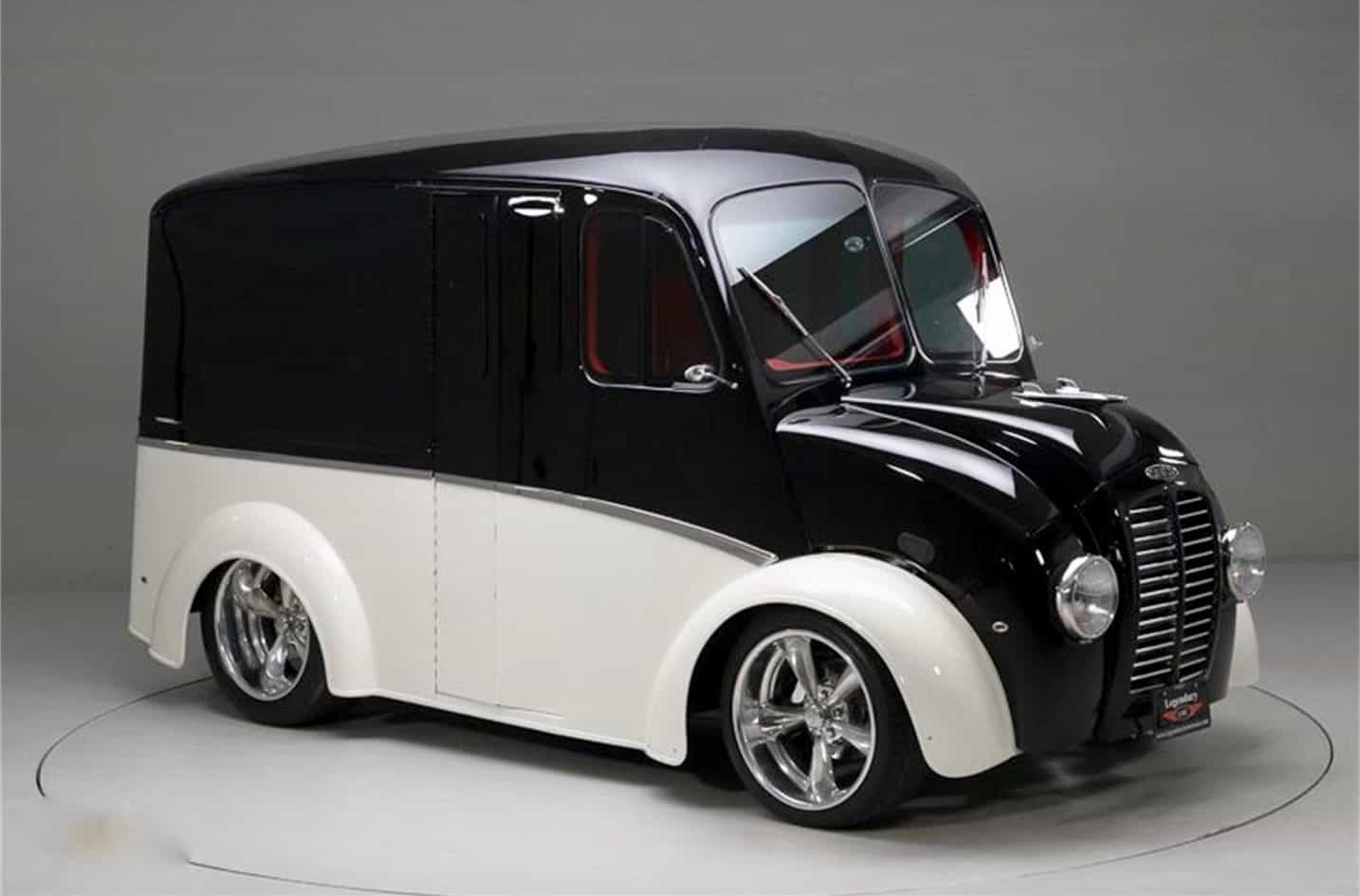 Although George Bacon was the chief engineer for the Detroit Electric Vehicle Company, he suggested to his bosses that they consider switching from batteries to gasoline engines to increase range and performance for customers who needed to drive in winter climates.

When the bosses scoffed at the idea, he left and in 1926 found enough investors to launch his own vehicle-producing company, the Detroit Industrial Vehicle Company.

The company would become better known by its nickname, “Divco,” and for its production of delivery vans, widely used by dairies, bakeries and other firms that did home delivery.

The Pick of the Day is a 1956 Divco Model UM that has been customized to deliver attention to its driver and occupants. It is being advertised on ClassicCars.com by a dealership in Halton Hills, Ontario, Canada.

“Initially being nicknamed ‘Divco’ by the owners and employees of the company, Divco became the official name in 1944,” the dealership notes. “Along the way, Divco launched its tremendously successful ‘snub-nose’ line of multi-stop delivery trucks, beginning in 1939 and continuing all the way until Divco’s bankruptcy and liquidation in 1986.

“Due to the ubiquitous nature of the snub-nose Divco, it became a part of popular culture and an indelible image in the North American collective consciousness.

“This particular 1956 Divco Model UM is not exactly the slow and steady milk-delivery appliance that may have roamed your neighborhood in the past. The first hint is the stance. It’s low and it rides on massive Billet Specialties 5-spoke wheels that look amazing! Next, there is the paint. It’s two-tone, black and white, broken up with a chrome strip down the side that has been wet sanded and polished to a show quality shine. 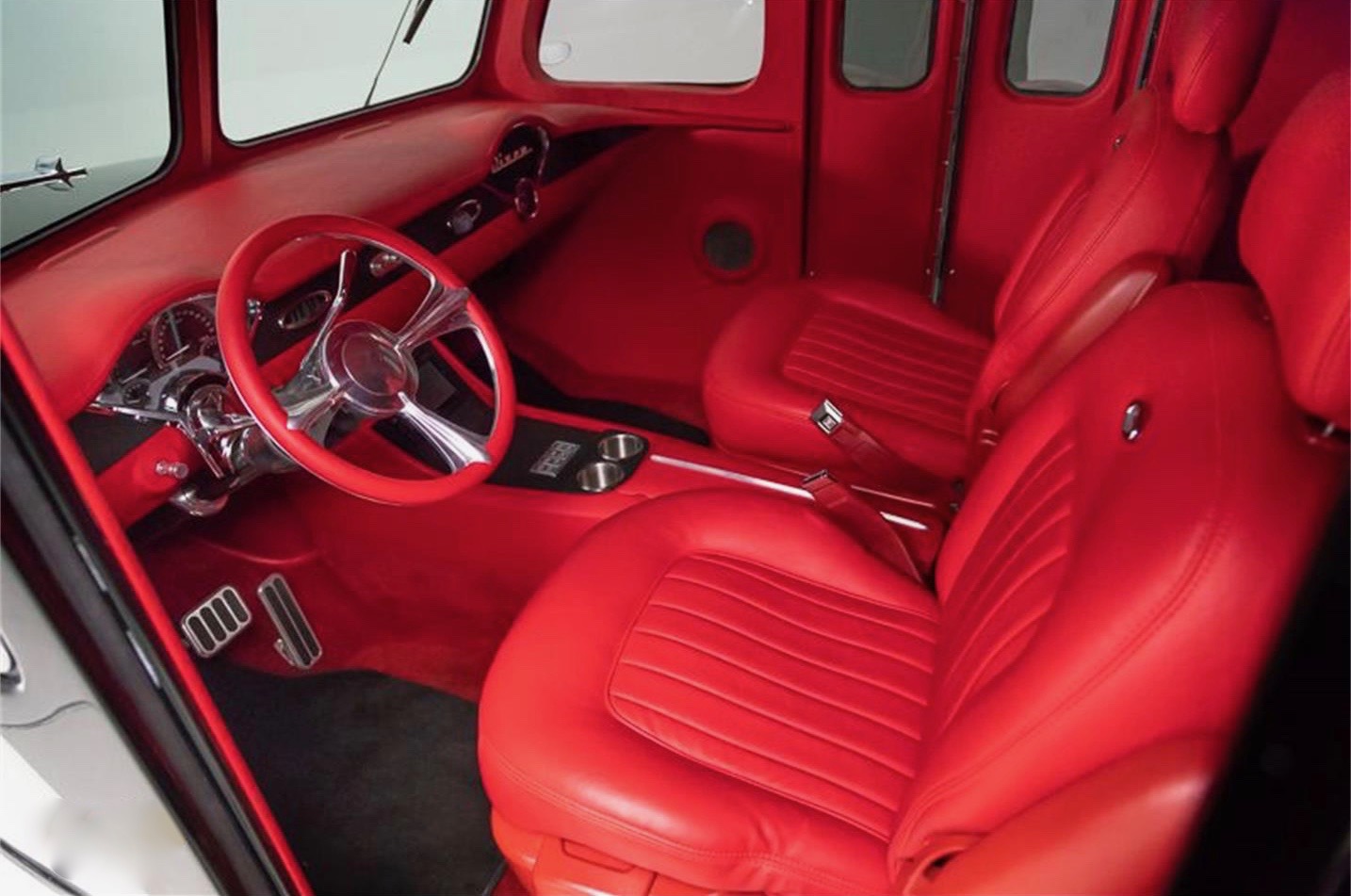 “Step up into the van to reveal that the factory utilitarian interior has been entirely replaced with gorgeous red leather everywhere. The leather is soft and smooth, a truly great place to spend time, and has won multiple awards for its quality and terrific appearance.

“The interior is finished with awesome Dakota Digital gauges, power windows and a polished metal steering wheel. A mighty Alpine stereo is ready for the tunes of your choice, which can be selected via Bluetooth compatibility.

“All of this excellence can be enjoyed with friends. too, as the Divco now boasts two bucket seats up front with a comfy leather bench just behind.”

The advertisement points out that the dashboard and trim come from a 1956 Chevrolet, that the vehicle has Vintage Air and “tilt the hood forward and will find a 6.0-liter LS engine that has been mildly upgraded.”

The V8 is linked to a four-speed automatic gearbox.

“To ensure that the operators of this fine machine do not break any milk bottles, the Divco rides on Heidts coilover suspension at all four corners with Wilwood disc brakes to slow things down. To gain the maximum benefit from the upgraded suspension, the frame of the truck has received boxing that has greatly improved its strength and rigidity”

The dealer notes that the vehicle has been driven less than 400 miles since its customization.

Preserved or restored, Divco delivery vans are hits at car shows across the continent. This one will hit you up for $95,000, but will deliver oohs and ahhs whether you’re cruising down the highway or parked at the cruise-in.