I barely took notice a few days ago when I received an email from Barrett-Jackson pointing out that the Las Vegas auction docket had been sold out and that 100 percent of the cars crossing the block this week would do so with no reserve price. That means that every one of those vehicles will go to the high bidder, rather than heading back home with a consignor whose reserve price wasn’t achieved in the bidding process.

With the sold-out docket, the no-reserve status applies not only to what you’d consider to be entry-level vehicles but also to the likes of the 2017 Ford GT and the 2019 Ferrari 488 Spider that will driven up on the auction block.

But as I said, I wasn’t much impressed by an announcement that every spot on the docket had been claimed, and at no reserve… until Wednesday, when I visited the convention center at Mandalay Bay, where the bidding begins Thursday at 8:30 a.m. for automobilia and at 11 a.m. on collector vehicles, and where Dodge and Toyota will offer thrill rides from 9 a.m. until 5 p.m. throughout the 3-day sale.

And with about 650 vehicles not only on the docket but on display for your visual examination and enjoyment, you don’t have to have a bidder’s number to enjoy the event.

That’s sort of the approach we take when we do our pre-auction picks here at the ClassicCars.com Journal. What we ask ourselves as we wander through the cars is which ones, if we had the money and the garage space, would we most want to take home, and then we share those choices with you.

Maybe that’s a way for those of you who are non-bidders to enjoy your visit: Make your own list of cars you covet, and perhaps you could even come up with how much you’d be willing to bid, and then see what those vehicles actually brought when they crossed the auction block.

Anyway, here are the cars, well, cars and one item of automobilia, that caught my attention (and note, I’m saving my favorite car for last):

A few weeks after the Barrett-Jackson auction at Mandalay Bay, the SEMA Show of aftermarket automotive product products stages its annual trade show at the Las Vegas Convention Center, and this 1958 Chevrolet Impala hardtop on the auction docket would fit right in at SEMA’s showcase. After being parked for around 36 years, the car was restored and customized in 2014 with such features as a 6.2-liter LS3 V8 engine, Tremec 6-speed manual gearbox, 9-inch Ford rear, custom exhaust, coilover suspension, Wilwood brakes and upgraded and updated interior, as well as a stunning shade of blue paint and sparkling chrome. 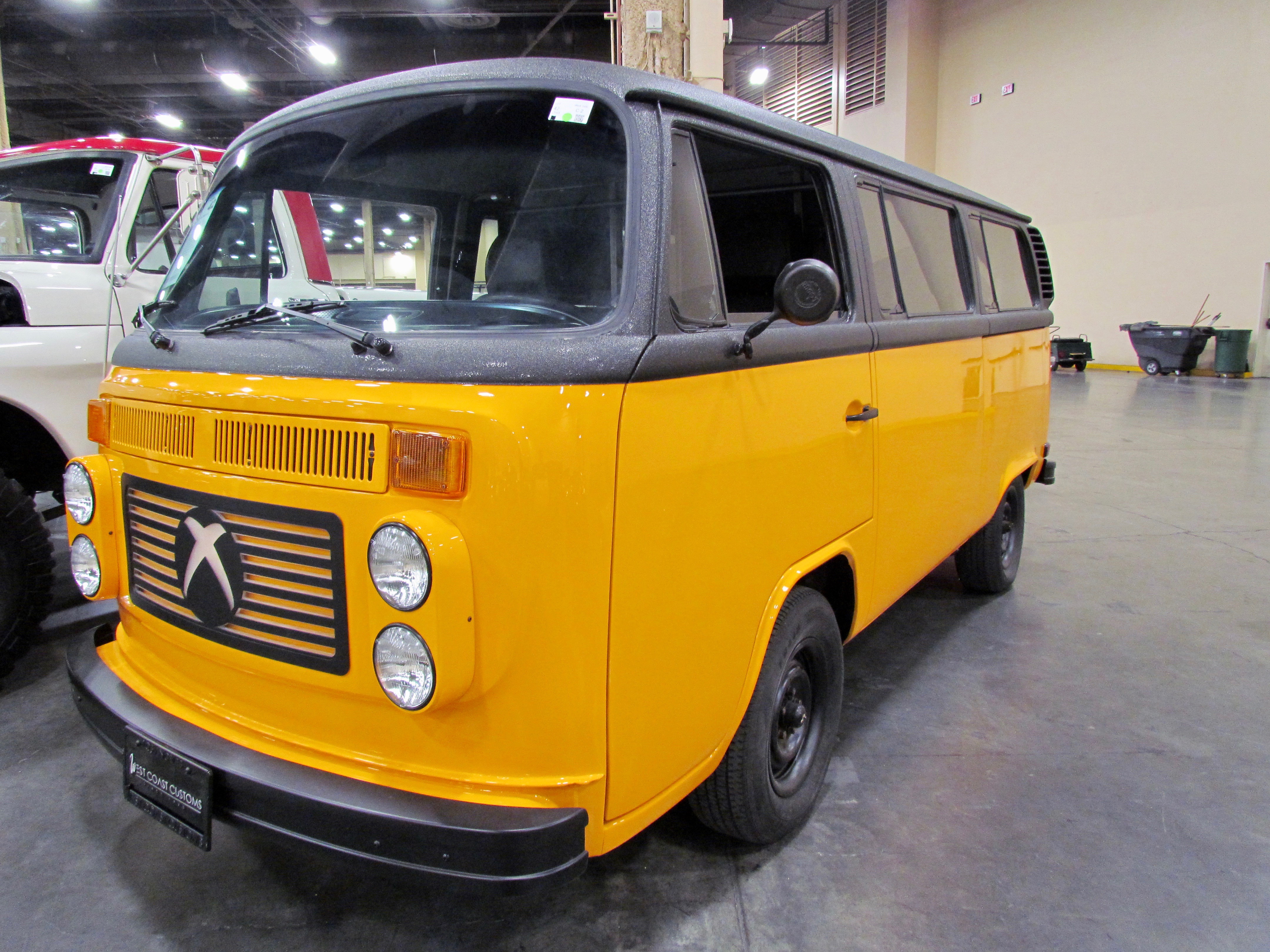 VW buses and vans have been the most-searched-for vehicles on the ClassicCars.com Marketplace website, and I saw at least eight of them (see gallery below) when I visited the Barrett-Jackson venue. Configurations ranged from a Samba re-creation to a Westfalia camper to a Coca-Cola promotional vehicle to a pickup to a Kobi that has been driven around the world. But my choice was this Xbox custom. My grandchildren would love the quartet of Xbox video game consoles and monitors mounted inside. I like the matte black over orange color scheme and the lowered stance.

Here’s my kind of muscle car, not some big engine jammed into a mid-size vehicle or pony car but a classic full-size Chrysler with a 413cid V8 in its ample engine bay. I like the lines of Virgil Exner’s Chrysler design and the chrome really shines against the Festival Red paint. The car is one of 435 300H coupes produced for the 1962 model year. 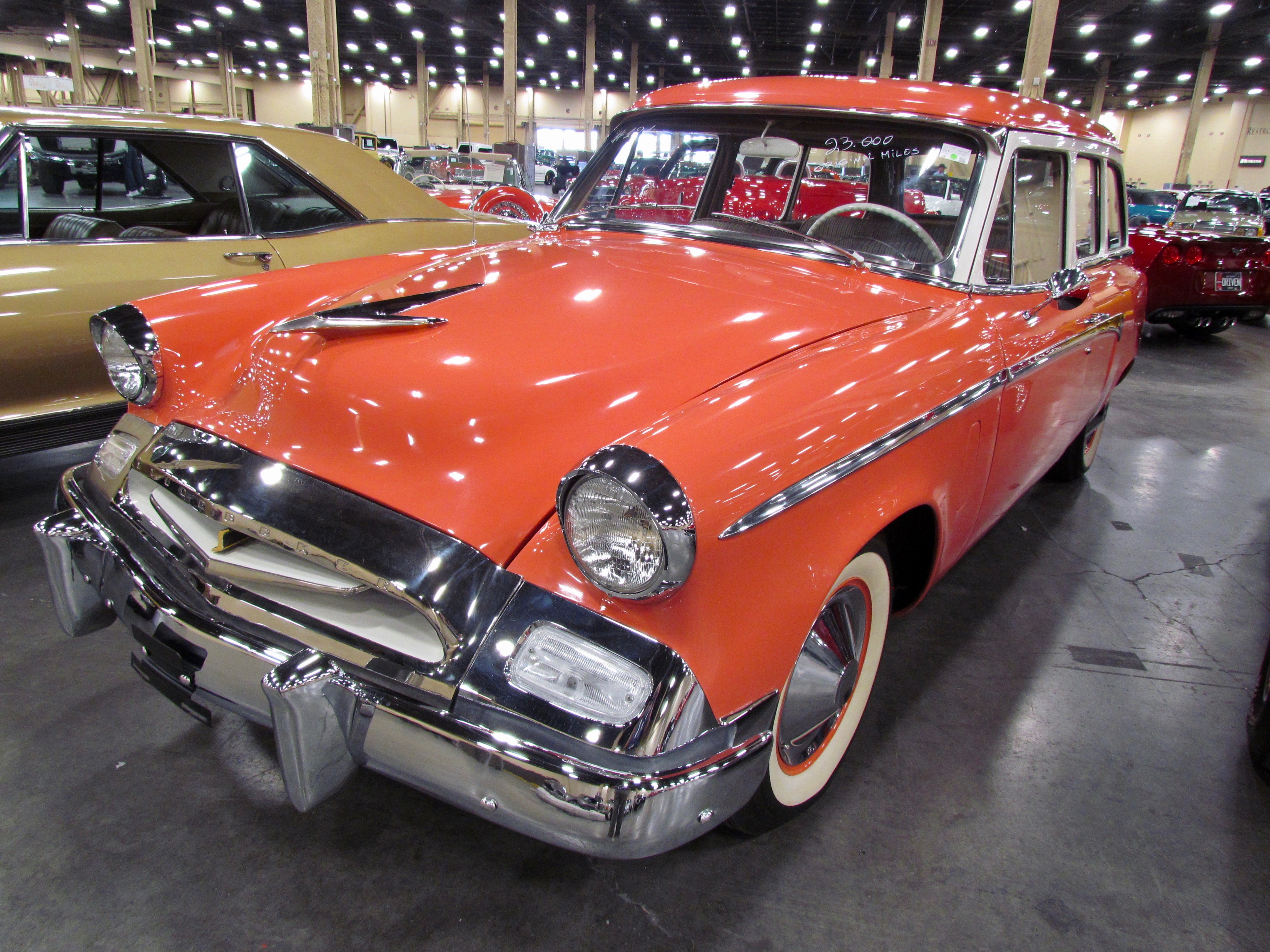 Ah, the era in which families traveled in station wagons, not in soccer-mom minivans or in crossovers that wish they were station wagons. This Studebaker Champion looks cool in its coral color and not only does it have a 6-cylinder engine, but a shift-for-yourself 3-speed gearbox. Oh, and like the famed Chevy Nomad, this station wagon is a 2-door, adding to its street cred. 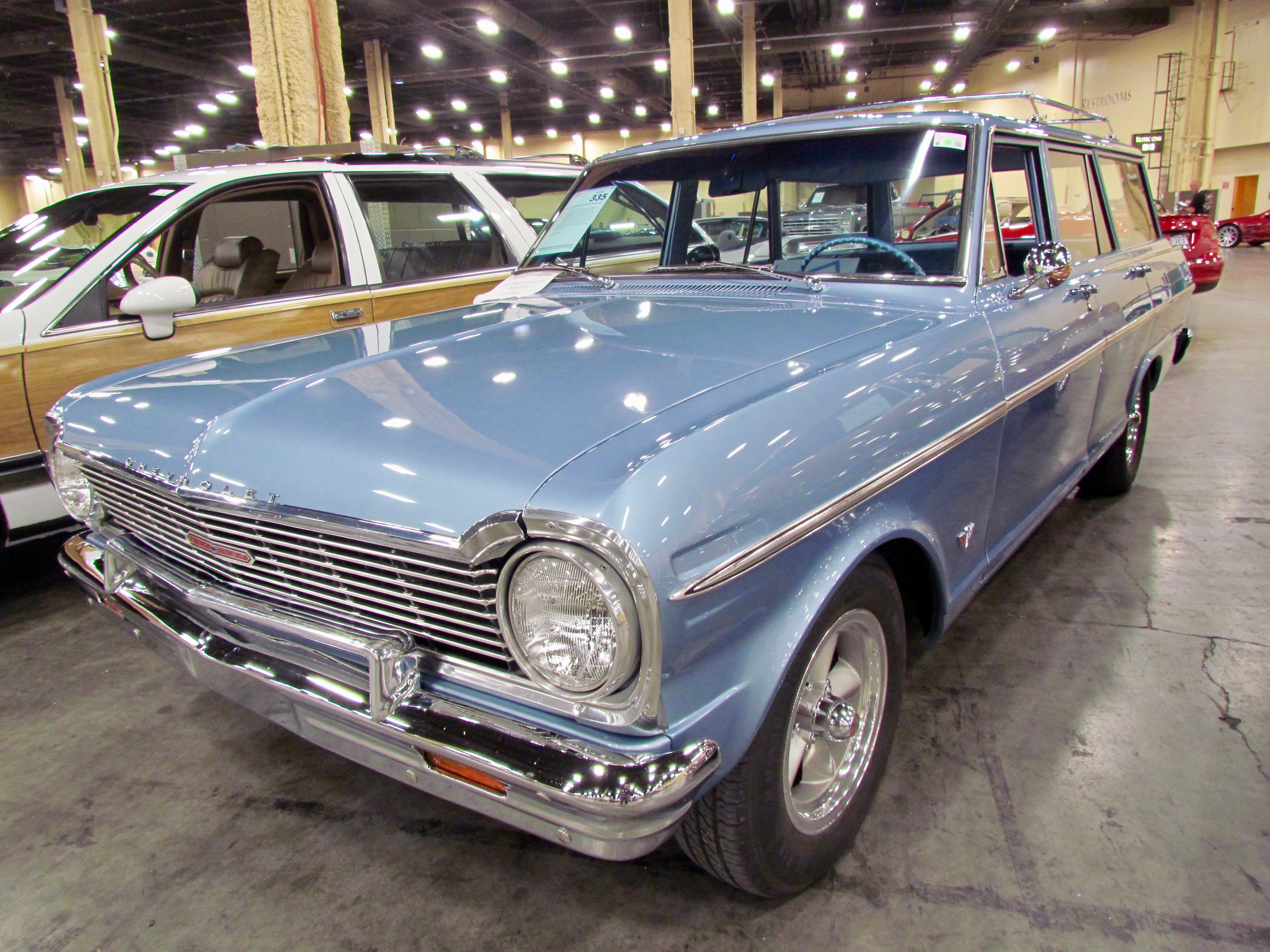 Though it might appear to be stock, this updated mid-‘60s Nova wagon has a 327cid V8 engine under its hood. 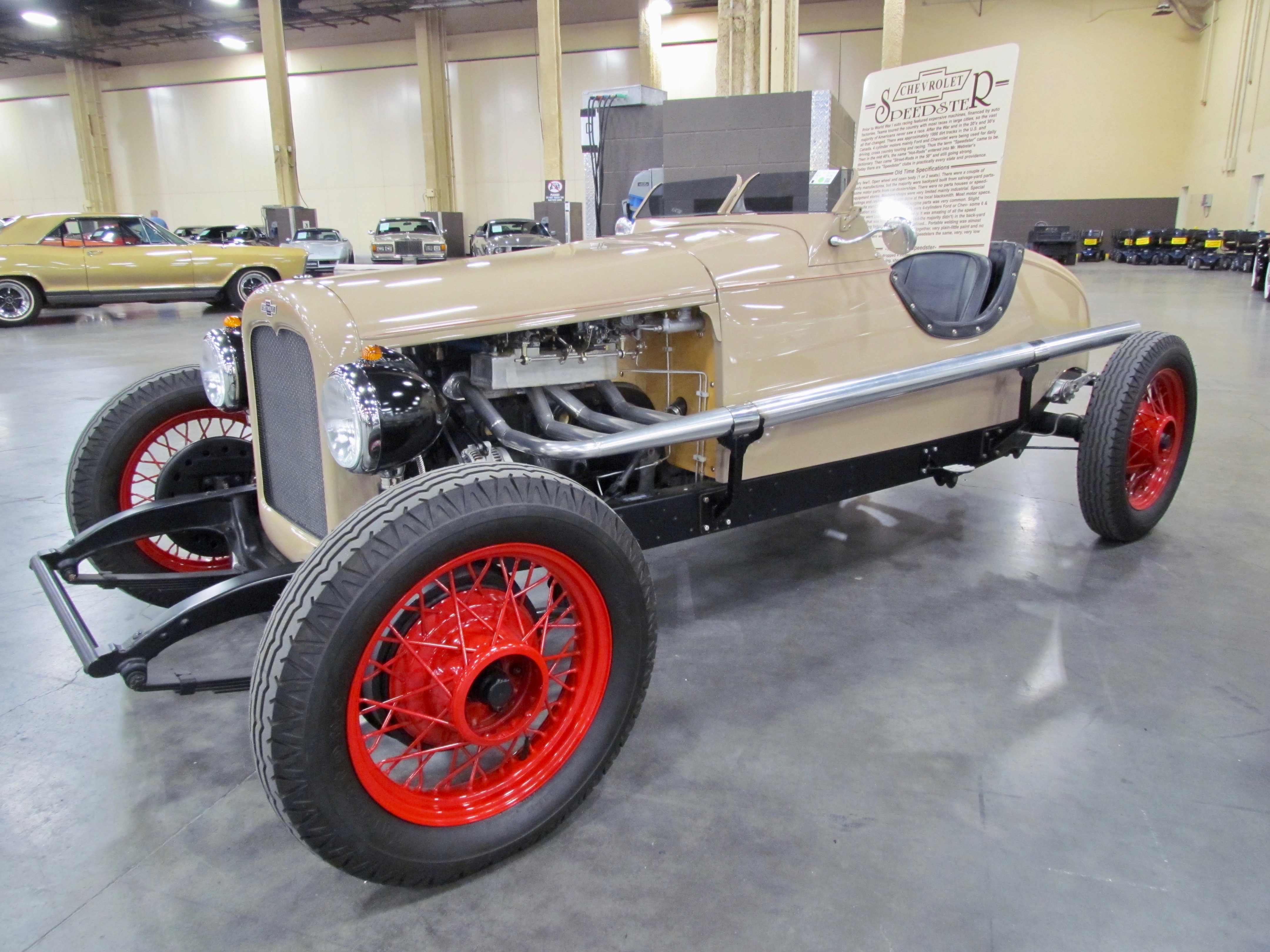 We tend to think of hot rods as having very powerful but heavy V8 engines, although this Chevy Speedster appears to have been built with a more reasonable budget in mind. It has a 1932 Chevy frame, a ’32 Chevy front axle, 1947 Ford rear axles, a Chevy S10 5-speed manual transmission and a 180cid 4-cylinder engine with a hand-built intake and exhaust, and a pair of Weber carburetors. 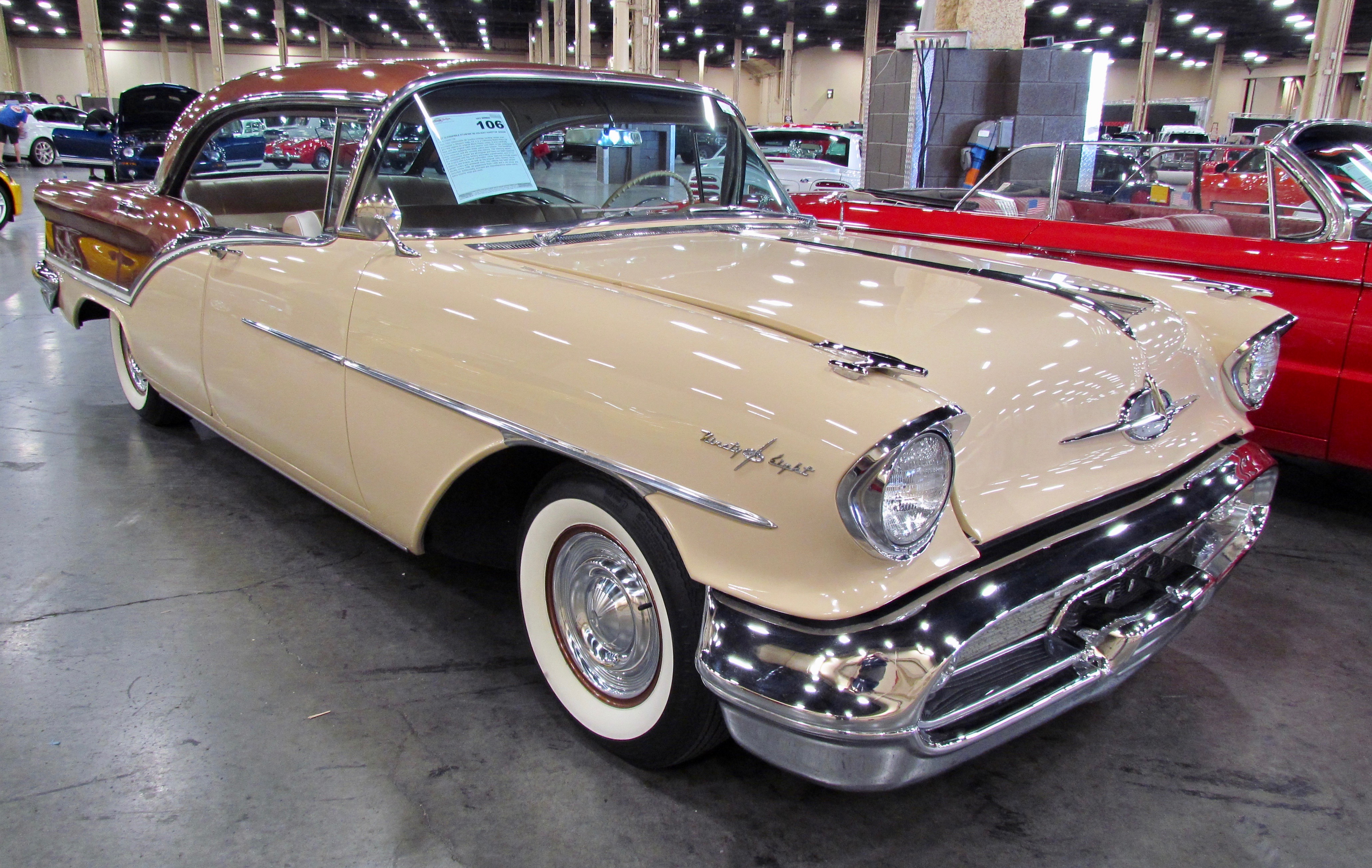 This mid-‘50s classic still wears its original California black plates. It ran with its original paint and interior until 2003, when it was restored, though with those same colors and factory interior materials. The steering wheel and instruments remain original, as are the 371cid V8 engine and automatic transmission. 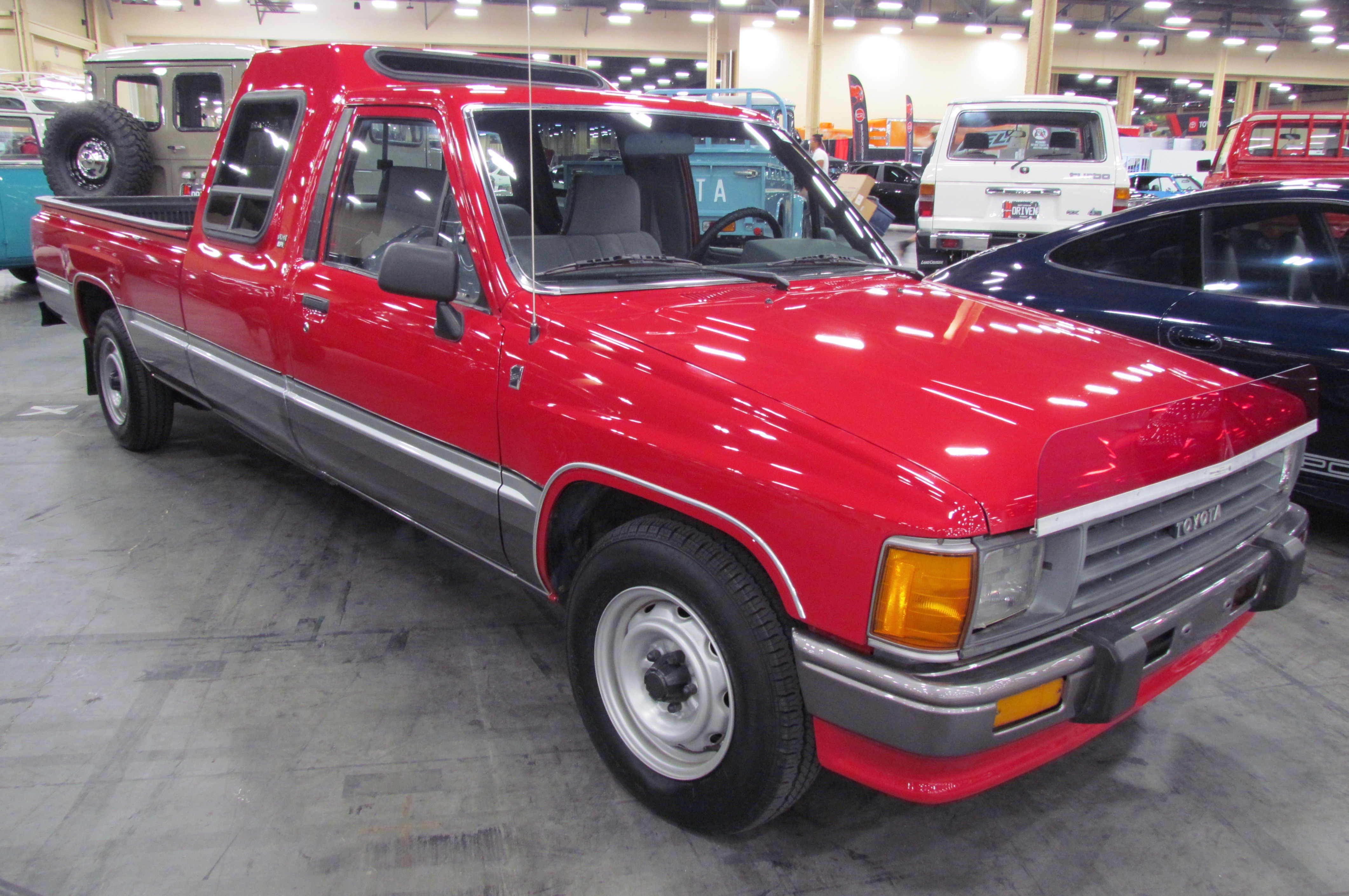 There are quite a few vintage Toyota pickups on the docket (see photo below with some of them), and such trucks are very hot now, especially with younger bidders. I selected this one because I don’t recall seeing this body style previously. It’s a 1-ton model offered only from 1986-88 as a heavy-duty alternative to the standard compact Toyota pickup. According to Barrett-Jackson, many of these trucks were used to carry campers. This one, reportedly owned since new by the same person, has a full-size and tall-roof cabin and a long bed. 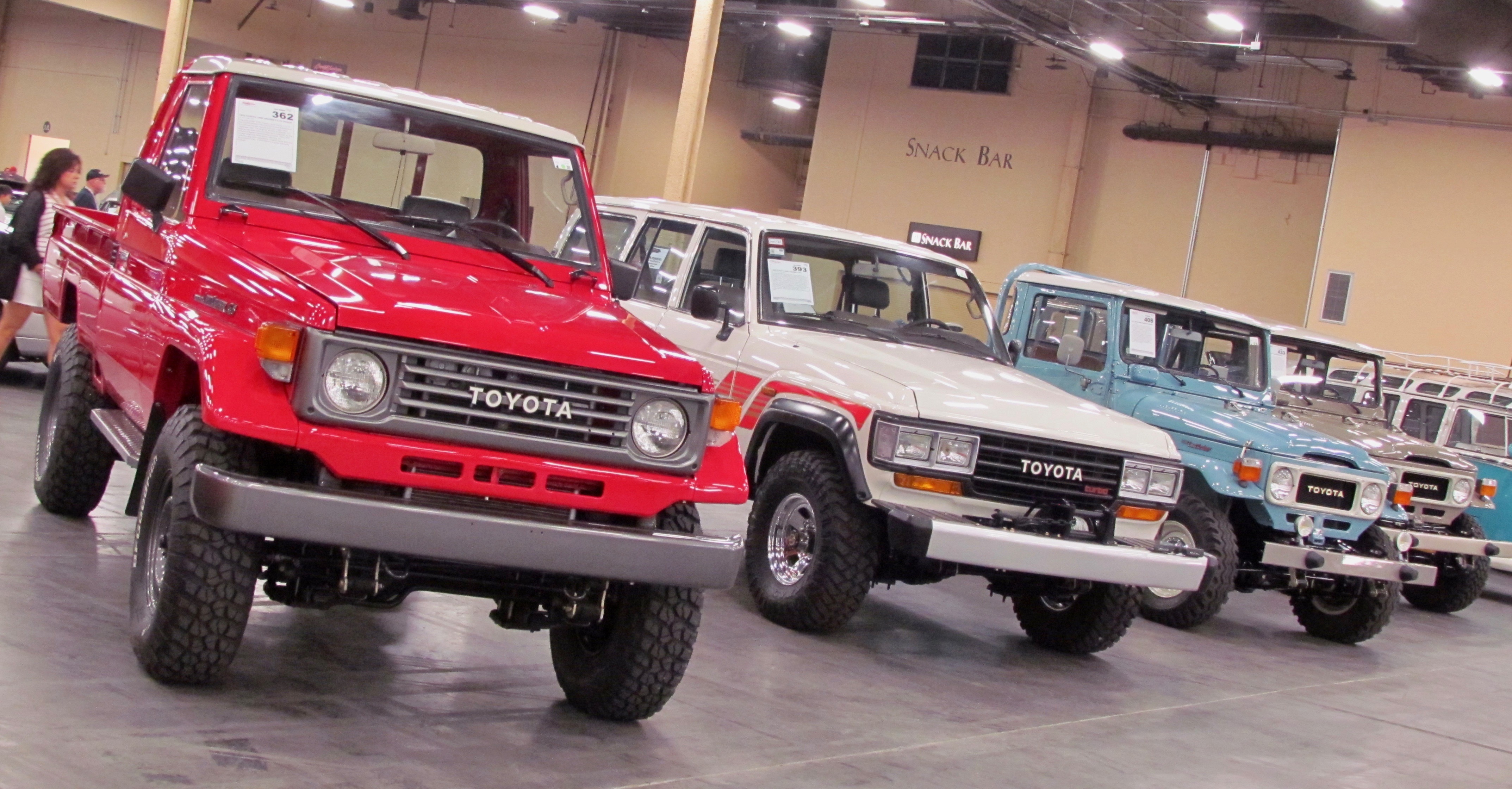 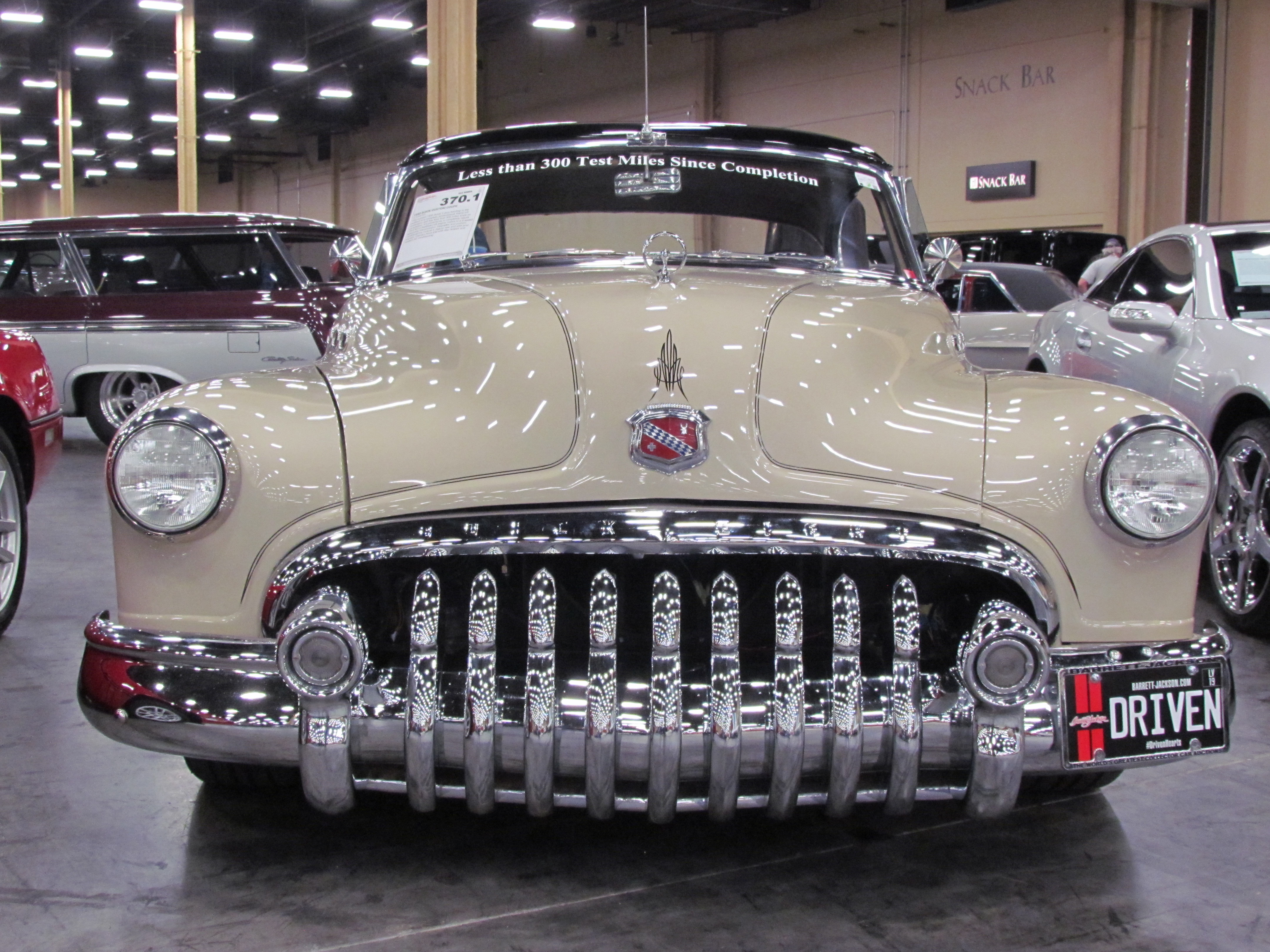 Another vehicle that appears to be factory stock. But while it has a 401cid Buick Nailhead V8, the engine is from 1965, the front end is from a Chevrolet Camaro, the car has air conditioning and disc brakes, and the rear is from Jaguar and includes posi-traction. 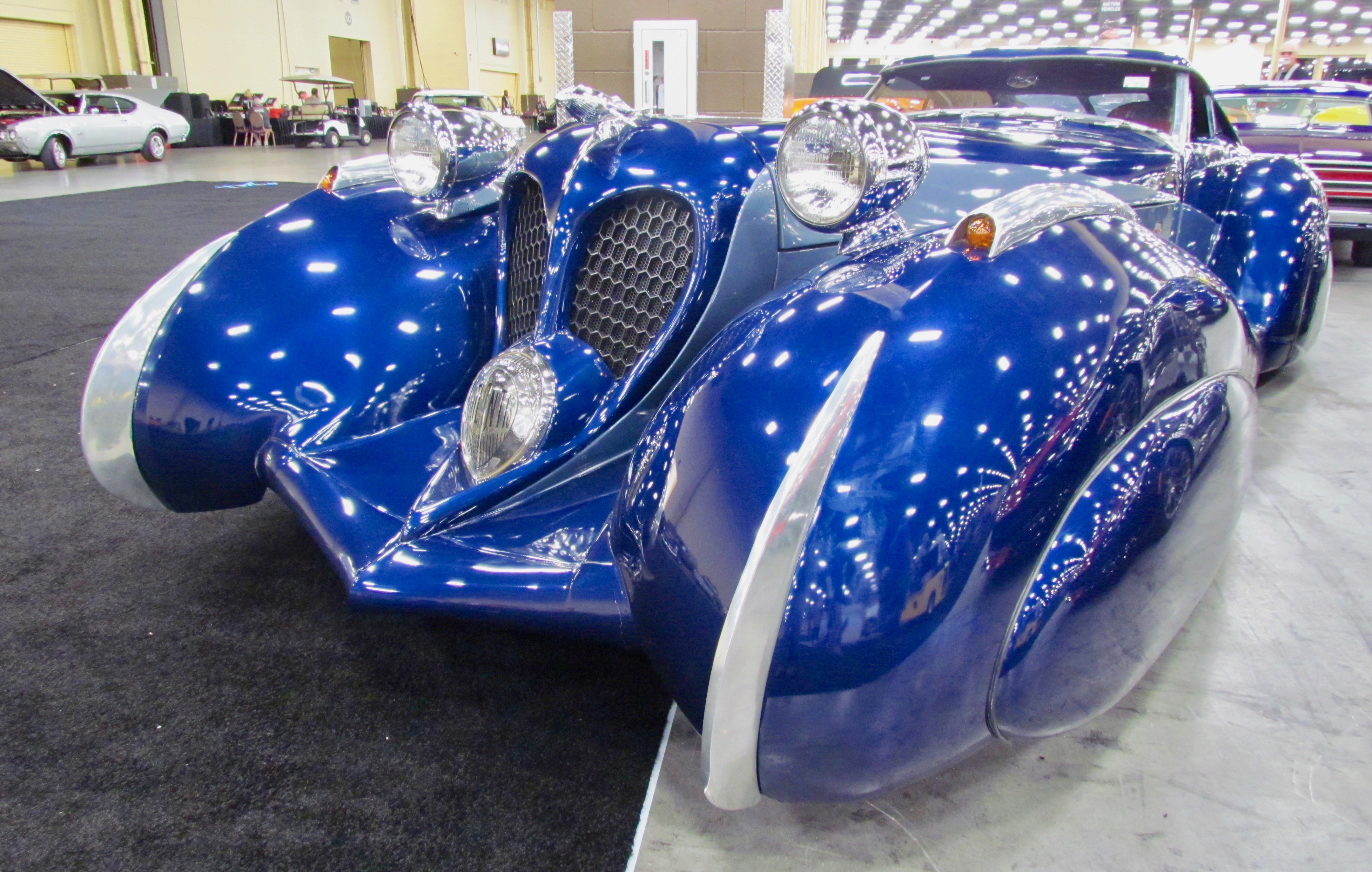 I’m including this car not because I’d want to own it, but because I simply couldn’t take my eyes off it. This custom creation of Ron Santasiero features long and wide French teardrop-style coachwork, a 351cid Ford Cleveland V8 engine, has fully skirted wheels and a removable hardtop. It has a red leather interior and modern interior accouterments and reportedly was shown at Pebble Beach in 2012. 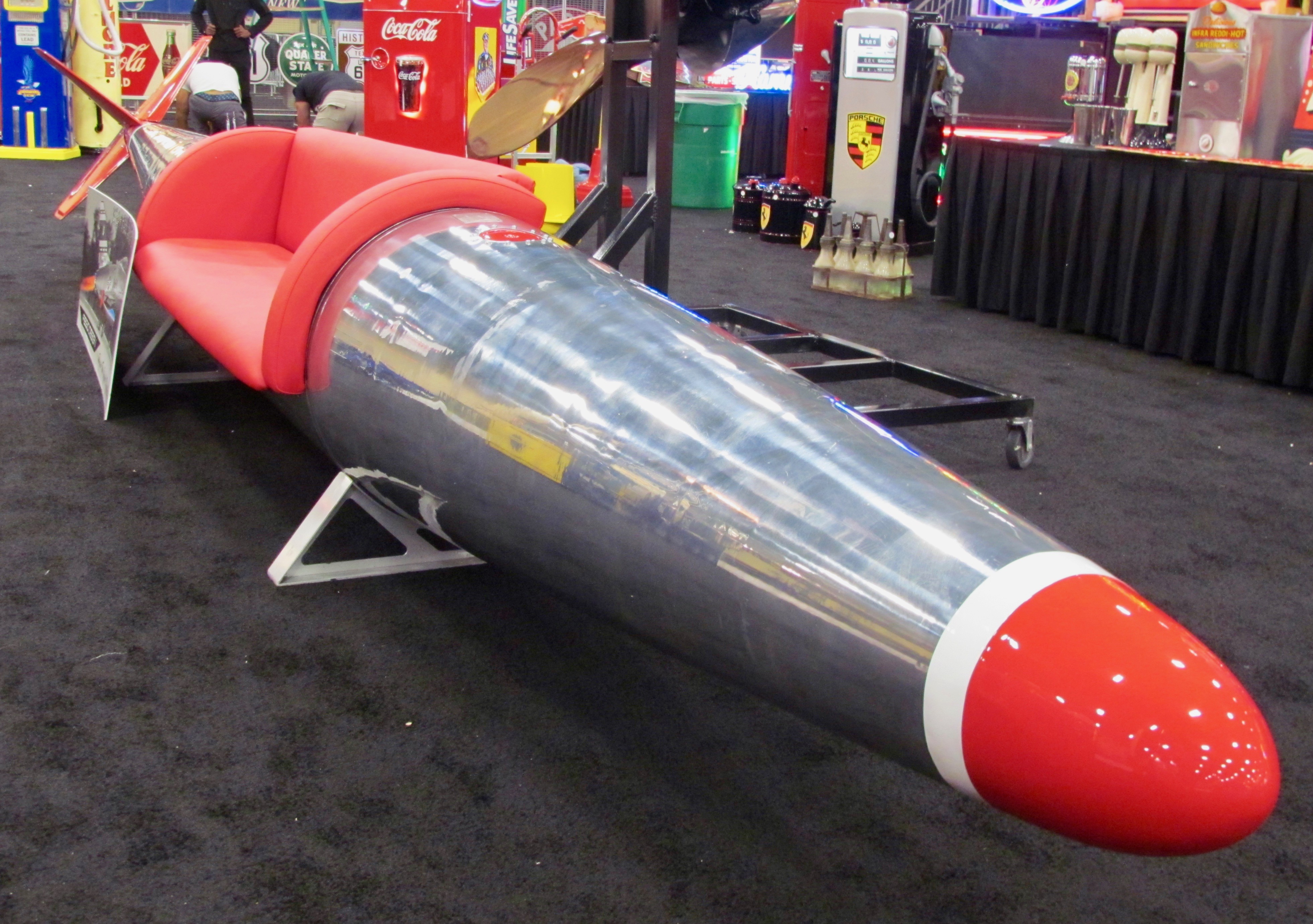 If you think the Santasiero Atlantic roadster is a strange beast, consider this sofa, produced by architectural artist Fabio Reggiani from the fuel tank of a 1959 American fighter bomber.  The catalog calls it functional art. It’s long enough that it might not fit in your living room or your garage, but it sure would be a conversation piece. 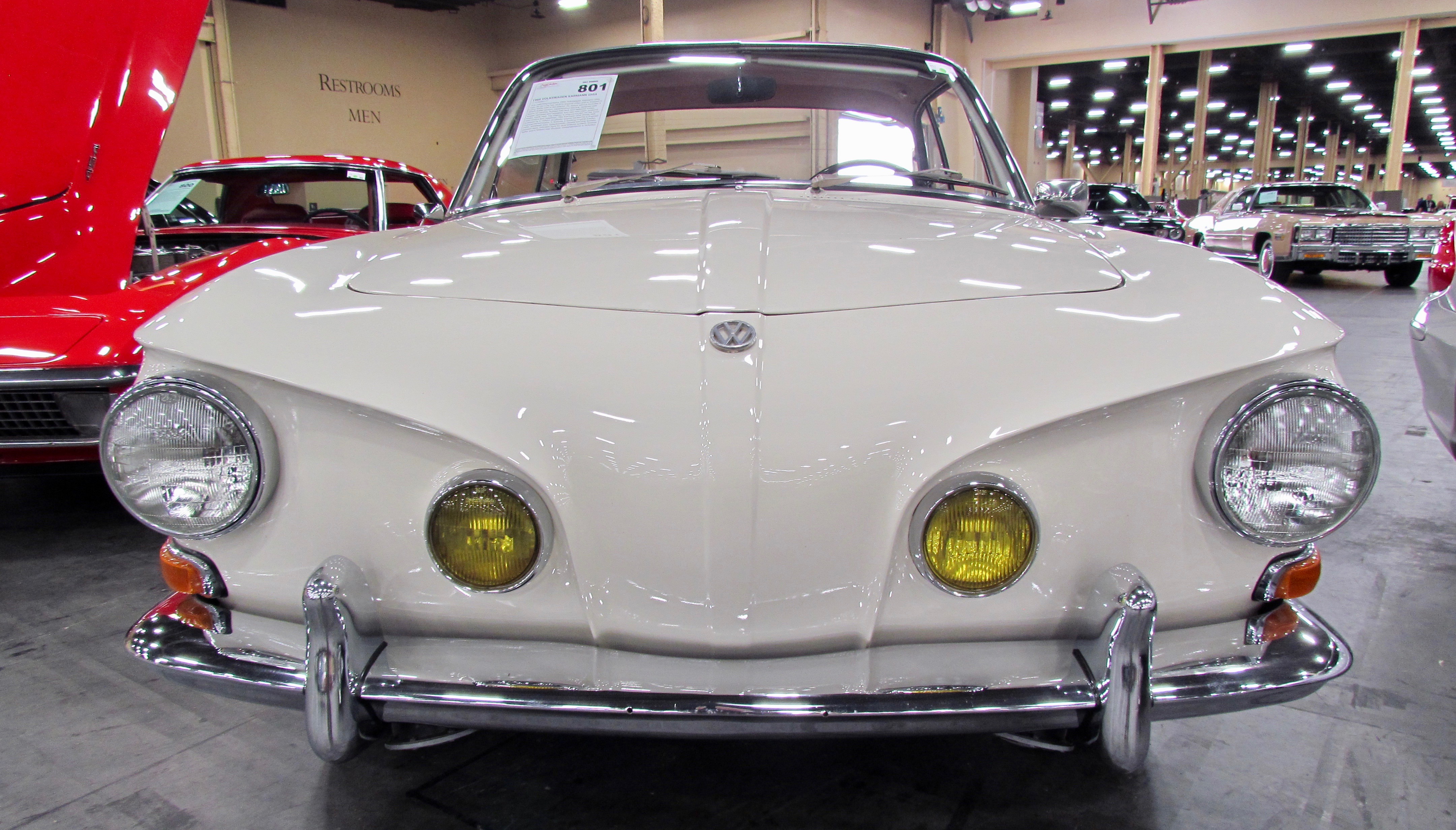 And last but not least, my favorite car, a 1968 VW Karmann Ghia, but not the one, technically the Type 14, you may remember. This is one of the Type 34 models produced in Germany and Brazil on the larger Type 3 platform. the Type 34 was not offered in the U.S., where the Type 3 was sold in notchback, fastback and squareback styles. This much more sporty design is done in Lotus White with red interior and the 63,875 miles on the odometer are said to be original. Power is from a 1.6-liter 4-cylinder linked to a 4-speed manual gearbox.