Is driving a 1937 Packard really like warm bagels on a cream cheese road?

You likely know the story of how Packard started building cars: That in 1890, James Ward Packard and his brother, William Doud Packard, started the Packard Electric Company to produce incandescent lamps and how James Ward Packard complained to Alexander Winton about the quality of the cars he was building and, as Mr. Ferrari would tell Mr. Lamborghini decades later, if you think you can do better…

So, the Packard’s joined with Winton board member George Weiss to do just that. And they did, starting in 1899, and for many years, Packard, Peerless and Pierce-Arrow were widely known as the “Three Ps,” the companies producing the finest vehicles in the United States. And if you had any doubts about the quality of a Packard, well, “Ask the man who owns one.”

And believe it or not, one of those men was my father!

We’ll get to my drive to Hagerty’s 1937 Packard in a moment, but first this personal note: Sometime after the start of this century, as a way to both encourage family discussion and to create interest in vintage vehicles, I wrote a story suggesting that people find out what car brought them home from the hospital as babies.

So I called my mother and asked her what car had brought me home from the hospital. She said it probably was her father’s car, since she and my dad didn’t trade the bicycles that they, as U.S. Navy veterans and newlyweds, bought after coming home from World War II for a car until after I was born.

A few days later, she called me back.

“It was probably the Packard,” she said.

What Packard?” I asked.

My Mom then explained that when he was a pharmacist working in the Cincinnati area in the late 1920s or perhaps mid-1930s, my dad had purchased a brand-new Packard and liked it so much that, after the war, in addition to those bicycles, he had bought a used Packard and that likely would have been the car that carried me home from the hospital. 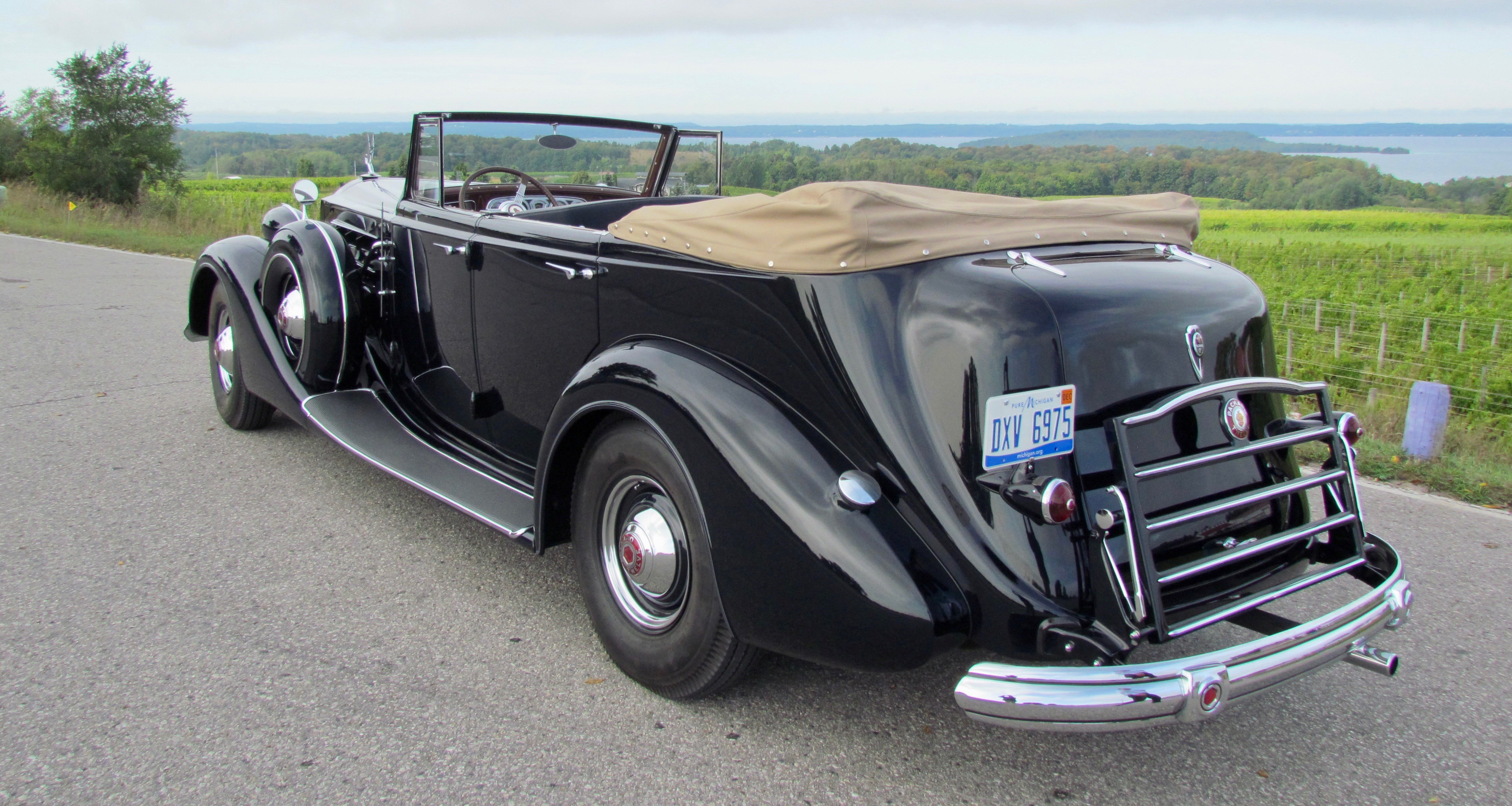 I was flabbergasted. My father wasn’t a car guy by any stretch of the imagination. Oh, he liked cars, but it wasn’t because he got under their hoods but because of the places they could take him, take our family.

While in high school, he and two buddies had done a “Niagara Falls or Bust” trip and, over time, we (Mom, Dad, my younger brother and me, or Mom and Dad on their own after we left for colleges) visited nearly every U.S. state and Canadian province.

When I pressed my Mom for more information about Dad’s “brand-new” Packard, all she could remember was that he had said it was “very long.” Nonetheless, it would seem that as a pharmacist in his late 20s or his early 30s that his Packard would have been one of the “junior” Packards, not one of the company’s big and expensive models.

Nonetheless, my dad had owned two Packards and here I was, in Traverse City, Michigan, where Hagerty was offering me an opportunity to drive the Packard that is part of its collection, a car that within Hagerty has been described as providing a ride that feels as if you’re on “four warm bagels and driving on a road of cream cheese.”

The Hagerty Packard is a 1937 1508 Twelve Convertible Sedan, the “sedan” nomenclature because this elegant car had roll-up windows rather than side curtains. The ’37 1508 was the pinnacle of Packard’s Fifteenth Series cars, rode on a 144-inch wheelbase, and was motivated by a 473cid V12 that provided 175 horsepower and, when new, cost $4,650, or around $85,000 in today’s dollars.

Hagerty acquired the car a couple years ago when a local collector was moving on a more regular basis to a winter home in Florida and had room for only four cars, two to be kept in Michigan and two in Florida. The rest of the collection was for sale and Hagerty bought this Packard and the 1931 Cadillac 452A V16 Fleetwood All Weather Phaeton that McKeel and Soon Hagerty entered at Pebble Beach in 2018.

I was skeptical about that “four warm bagels driving on a road of cream cheese” comment, and especially after the V12 engine started with some clattering sounds. But as soon as the engine warmed up it became virtually silent and I took the steering wheel, marveled at the Honda-like ease of operating the clutch and drove the car up and back down the Old Mission Peninsula that bisects Grand Traverse Bay.

Warm (but not toasted) bagels and cream cheese, indeed.

Hagerty’s Jonathan Klinger explained that the car’s smooth ride was the result of Packard’s decision to equip its finest 1937 models with independent front suspension and with a pair of springs supporting each of the car’s four wheels. One other thing that suspension setup does is to reduce body roll to nearly zero; while oh-so-smooth, the car takes curves with little discernible lean.

After climbing up and settling in behind the steering wheel, I was surprised at the ease of shifting and realized how spoiled I’ve become driving modern cars with power steering. You work a little to make a 90-degree slow-speed turn from a stop sign, but once you get moving along, steering is much easier.

Speaking of the rest of the car, limousine distant behind the driver is the Packard’s back seat. I wondered what it might be like to ride back there, so I had Klinger take the role of chauffeur and I moved to the way-back seat, where I discovered how windy it was and why those wind-up windows must have been a big sales point with potential customers.