Evalyn Walsh McLean has been characterized as an eccentric heiress, a socialite who used her inheritance from mining to purchase, among other things, the Hope Diamond and a 1912 Delaunay Belleville Type IA6 Park Phaeton, which will be offered for bidding October 16 at H&H Classics auction at the Imperial War Museum in Duxford, England.

McLean was the last private owner of the 45-carat blue diamond, which she purchased from Pierre Cartier in 1911 for $180,000 to go along with another of her possessions, the 94-carat Star of the East diamond.

McLean was the daughter of an Irish immigrant who struck it rich during the American Gold Rush. She was known to be “feisty” and a tomboy, but after the family became wealthy, she groomed as a debutante and went to Paris to study music and to write her autobiography, Father Struck It Rich. 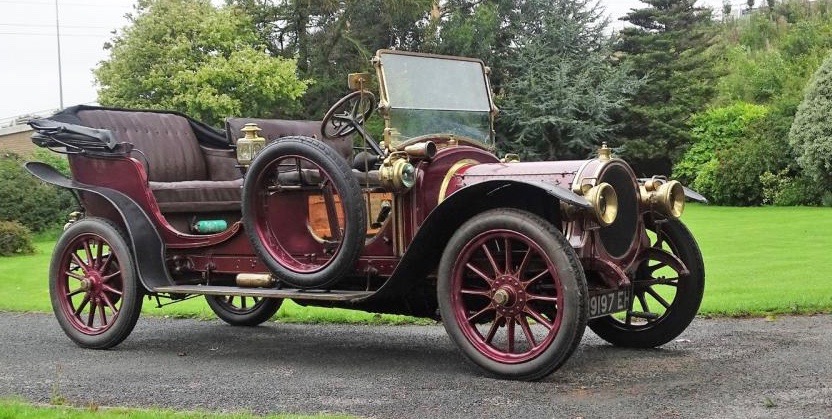 Against family wishes, she eloped in 1908 with Edward Beale McLean, heir to the Washington Post, and sailed off to Europe and the Middle East on a honeymoon on which they squandered $200,000 and then could not pay their final hotel bill.

How wonderful to inherit the family fortune, and just three years later she was buying the Hope Diamond despite the curse; after being stolen from an idol in India, the diamond reportedly carried bad luck and death, not only for its owner but for anyone who even touched the gem.

McLean lived to be 60, and mothered a family with an interesting history. Her oldest son died when at age 9 when he was struck by a car. Another son was married four times, including to Gloria Hatrick, who later married actor Jimmy Stewart.

Another son was married three times and his last wife turned down the Hope Diamond fearing its curse and later sold her mansion to John Lennon and Yoko Ono. Her daughter married U.S. Senator Robert Reynolds but died at age 24 of an overdose of sleeping pills.

As for McLean’s Delaunay, H&H Classics expects it to bring as much as £120,000 ($150,000) at auction. The auction house says the car is original, “right down to its numbered floorboards.”

The coachwork for the French-built car was done by Brewster and is being offered after nearly 40 years of private ownership when it was rallied frequently, including a 460-mile drive in 2018.

“Notable as the first French manufacturer to produce a six-cylinder engine, Delaunay Belleville was a genuine rival to Rolls-Royce in period,” said Damian Jones of the auction company. “It has a wonderful patina, and is a highly usable and imposing Edwardian motorcar.”

My NASCAR ride along at Phoenix Raceway (4K video)