Top-10 searched-for lists stable, but there’s movement among the Next-5

Because the Top-10 most-searched-for vehicles in the ClassicCars.com Marketplace experiences very little change from month to month, we’ve decided to drill down deeper into the listings to see if we can spot some trends.

Again in August, the cars most searched by Marketplace visitors remained the 1967 Ford Mustang (No. 1 for the second month in a row), and the 1969 Dodge Charger and 1967 Chevrolet Impala. That trio has dominated the top three positions all year.

The only significant change involved the ’63 Corvette bumping the 1957 Chevrolet Bel Air from the Top 10. 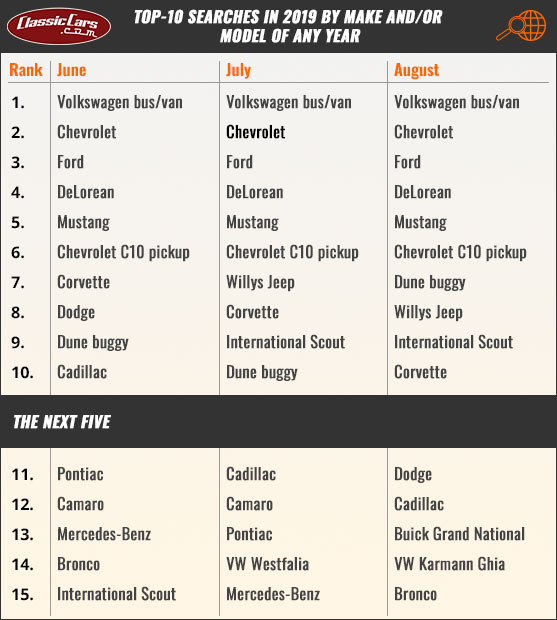 Also stable was the list of top searches for all model years, led for the third month in a row by the Volkswagen van/bus, and followed by all-years Chevrolet, Ford, DeLorean, Mustang, Chevy C10 pickup trucks, VW dune buggies, Willys Jeeps, International Scout and Corvette.

With the top-10 lists showing such consistency, we wondered what vehicles might be up-and-coming among potential buyers, so we took a look at the Next-5 on the all-years lists for the past three months.

In June, they were (in order) Pontiac, Camaro, Mercedes-Benz, Bronco and International Scout. But in July, that Next-5 list was led by Cadillac, followed by Camaro, Pontiac, VW Westphalia campers and Mercedes.

What about August? Dodge, which was a top-10 search in May and June, was back, though only as No. 11 overall, followed by Cadillac, newcomer Buick Grand National, newcomer VW Karmann Ghia, and Bronco.

Could the Grand National and Karmann Ghia popping up indicate a developing trend in renewed interest in those models? And what does it say about Camaro that it wasn’t even among the top 15?

It could be too early to tell, but it certainly will make the September search list something to anticipate.