Ian Callum has been busy since leaving his long-held position as head of design for Aston Martin Lagonda. The first completed project of his new Callum studio has been revealed. It is an updated version of his first Aston Martin, a run of 25 Aston Martin Vanquish 25 by Callum vehicles is being produced by Swiss-based R-Reforged.

According to the news release, the program has been endorsed by Aston Martin Lagonda and includes more than 100 design detail changes for a car launched in 2001.

“It’s rare that a designer has the chance to retell the story of one of their own cars,” Callum is quoted in the announcement. “I’ve wanted to do that for some time and with R-Reforged we could do something special.

“Materials and technologies have advanced, allowing us to introduce these along with new ideas that weren’t feasible when the car was launched.”

“I like that the Callum team’s first project is based on the original V12 Vanquish deign by Ian,” added Marek Reichman, who succeeded Callum as chief creative officer at Aston Martin. “Aston Martin Lagonda is very proud of the cars created during Ian’s time and they are an important part in both our heritage and evolution.”

“R-Reforged is intent on creating mesmerizing and bespoke automotive masterpieces,” said R-Reforged co-founder Andreas Baenziger. “With Ian, we can not only offer such a car but also the prospect of a special customer experience by specifying it with the original designer. With the Aston Martin Vanquish 25 by Callum we are very proud to establish another exciting project following the market introduction of the Aston Martin Vantage V12 Zagato Heritage Twins by R-Reforged.”

The Vanquish 25 by Callum retains the car’s overall silhouette but sits 10mm lower on custom 20-inch wheels with custom Michelin Pilot Sport tires. It has carbon fiber front and rear bumpers, side strakes, window surrounds and wing as well as a rear diffuser with integrated exhaust for enhanced aerodynamics. Other updates include high-intensity LED lighting and chassis modifications.

“We love the original Vanquish but expectations of the performance of a GT car have changed since its launch,” said Adam Donfrancesco, head of the R-Reforged engineering team.

“Today’s GT should blend sports car performance with usability, yet be comfortable enough to eat up a thousand-mile mission without a thought. Our focus was to create a supple and comfortable ride that’s responsive and a chassis that is supportive but not harsh. With stiffer anti-roll bars, tuned dampers, custom springs and lower ride height, we’ve increased steering response and reduced roll but crucially allowed the damping to ‘breathe’ a little more. The car now actually feels lighter than the original and more alive.”

Among the updates were the application of race-spec wheel hubs and brakes. The 5.9-liter V12 engine also was tuned to provide 580 horsepower, 60 more than in original spec. 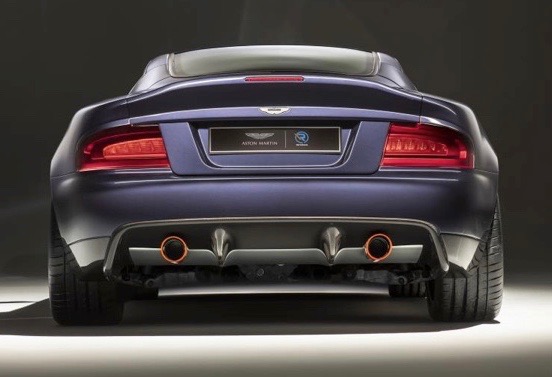 Inside the car is the first instrument cluster designed by British watch manufacturer Bremont, which also provides a removable pocket watch.

Other interior changes include seats, steering wheel, paddle shifters and Bridge of Weir Leather trim for the tartan design. The cars also get custom luggage by Mulberry.

Customers who own a Vanquish can have it updated. R-Reforged also can obtain an original vehicle and turn it into a Callum edition for £550,000 ($665,000).