My first impression of the 2020 Kia Telluride was that it displays a trend among automakers producing sport utility vehicles, that of copying Land Rover by proclaiming the vehicle’s name in big letters along the leading edge of the hood.

I’d just gotten out of a Mitsubishi OUTLANDER and here I was, swapping it for a Kia TELLURIDE, those vehicle model names in capital letters because that’s the way they were displayed on the hoods of those cars, just like the Land Rover DISCOVERY or the RANGE ROVER in its various versions. 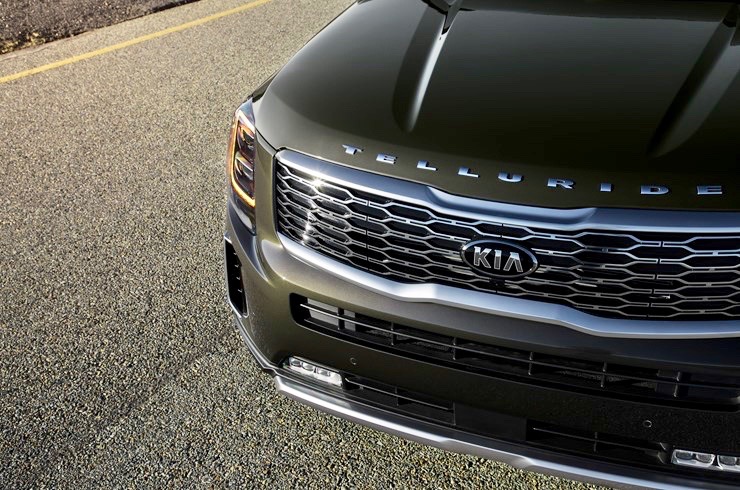 My second impression arrived when I opened the driver’s door and saw the Telluride’s interior. I anticipated the three-row setup, but not the brown and perforated Nappa Leather seating surfaces with unusually shaped quilting in the form of what I’d describe as flathead arrows and defined by lighter contrast stitching.

Impression No. 3: This SUV has a side step that runs beneath the front and side doors, but the step up isn’t that high and the step seems to only get in the way, especially as I exit the driver’s seat and keep catching my heel on the step.

Impression No. 4: It’s finally cooled down some — it’s only 93 degrees today — here in the Valley of Vegas, and the V6 engine in the Telluride shuts off at stoplights and with it goes the air conditioning. I’m all for saving fuel but not for cooking myself in the process.

Impression No. 5: Although the specification sheet says the Telluride is 78.3 inches wide, not atypical for such a vehicle, when driving it feels — at least to me — like a much wider vehicle. I was constantly anxious, uncomfortably anxious, while making sure there was room on both sides while driving in traffic.

On the other hand, the vehicle is easy to park in a normal space, so I’m thinking the feeling of the vehicle being extra wide in traffic has something to do with my vantage from behind the steering wheel.

Speaking of driving, the 3.8-liter V6 offers 291 horsepower, but that doesn’t max out until you reach 6,000 rpm, and torque is rated at 262 but again, doesn’t peak until you exceed 5 grand. So when the light turns green, you’re not going to win any drag races. Unless, of course, you want to leave the SUV in Sport mode whenever you’re driving; that mode seems to bump up revs so you get upshifts more quickly as you accelerate.

So those were my initial impressions. Here are some additional ones, offered by my daughter, her husband and their children, a family that drives a full-size SUV on a daily basis: Love the big video screen on the dashboard; love the air conditioned seats; love all the USB ports and there’s even a regular electrical plug in the rear section of the vehicle; like the second-row sun screens — and the sunroof over the third row; don’t like the fact that a child sitting in the third row can push a button and manipulate the second-row seats, even while they are being occupied by his brother or sister. 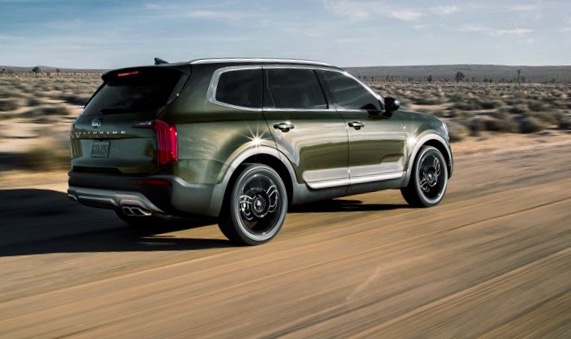 Kia notes that the Telluride is the largest vehicle it has produced, and while the one I drove had second-row buckets and seating for 7, there’s also an 8-person version. “Large, bold, capable and comfortable,” the company says, adding that the Telluride is a “midsize,” perhaps an indication that an even larger SUV might be in the pipeline?

Telluride was designed in the U.S. (Kia’s California styling studio) for Americans, and is built domestically (in West Point, Georgia).

Among the interesting exterior design features are the orange and rectangular daytime running lights and the multiple, gill-style tail lamps. The 20-inch black-finished alloy wheels also enhance the vehicle’s design.

The vehicle is packed with standard features — 3-zone climate controls, blind-spot warning and assistance, rear cross-traffic alert, smart cruise, navigation with UVO link (with rear-occupant alert that notifies the driver if he or she leaves the vehicle with someone still inside), 10 1/4-inch touchscreen, and in the SX trim, the rear sunroof, second-row captain’s seats, Harmon/Karden surround sound, and more.

Options on the one we tested were the Snow White Pearl paint, heads-up display and 110-volt inverter (they come as a package), brown Nappa Leather seating, premium headliner, heated and ventilated second row seats, and carpeting.

The $43,490 base price for the SX trim is more than reasonable for a vehicle of this size and luxury. However, if you’re interested, be sure to do a good, long test drive to make sure your first impressions are those you can live with for years to come. 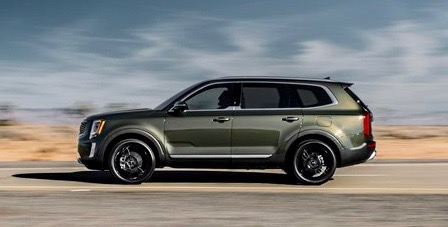