According to the Studebaker Drivers Club Forum website and subsequent media reports, the board of trustees of the Studebaker National Museum in South Bend, Indiana, has voted to bid on what is being called “the most important Studebaker vehicle sold in this country in the past 50 years.” The vehicle is the Hunt-Jenkins Special that raced in the Indianapolis 500 in 1931 and, just weeks later, set a record in winning the Pikes Peak Hill Climb.

The car, consigned from the Robert W. Valpey Collection, has been consigned to the Gooding & Company Pebble Beach auction scheduled for August 16-17. The auction house has set a pre-sale estimated value on the car of $500,000 to $750,000.

The museum board has committed “a significant amount of funds” toward the possible purchase and asking Studebaker Drivers Club members and others for pledges toward the effort to win the car at auction.

To participate, people are asked to email the museum’s executive director, Patrick Slebonick, at [email protected], to do so by August 14, and to include your name, address, telephone number and pledge amount. Then, if the museum is successful in its bidding on the car, you will be asked to make good on your pledge.

The Hunt-Jenkins Special was built in a partnership between George Hunt, Studebaker’s director of testing, and racer Ab Jenkins, who had set speed and endurance records at Bonneville in Studebaker cars.

Hunt ordered a racing chassis from Indy-based Rigling and Henning and had “Pops” Dreyer create aluminum bodywork and an ornamental grille cut down from a stock Studebaker President, and a pointed tail. At its proving grounds in South Bend, Studebaker fitted a high-compression 336cid straight-8 engine and various other Studebaker components, including brakes, axles, transmission and steering gear.

Tony Gulotta, a former member of the Packard Cable racing team, qualified the car 19th, but within 1 mph of the 1931 pole-sitter’s speed. Gulotta was battling for the lead late in the race when he was caught up in a crash on the 167th lap after the Hunt Special ran over oil and hit the wall.

The Studebaker was repaired and sent to Pikes Peake, where three-time winner Chuck Myers won the hill climb by 15 seconds, setting a course record of 17 minutes, 10.3 seconds. 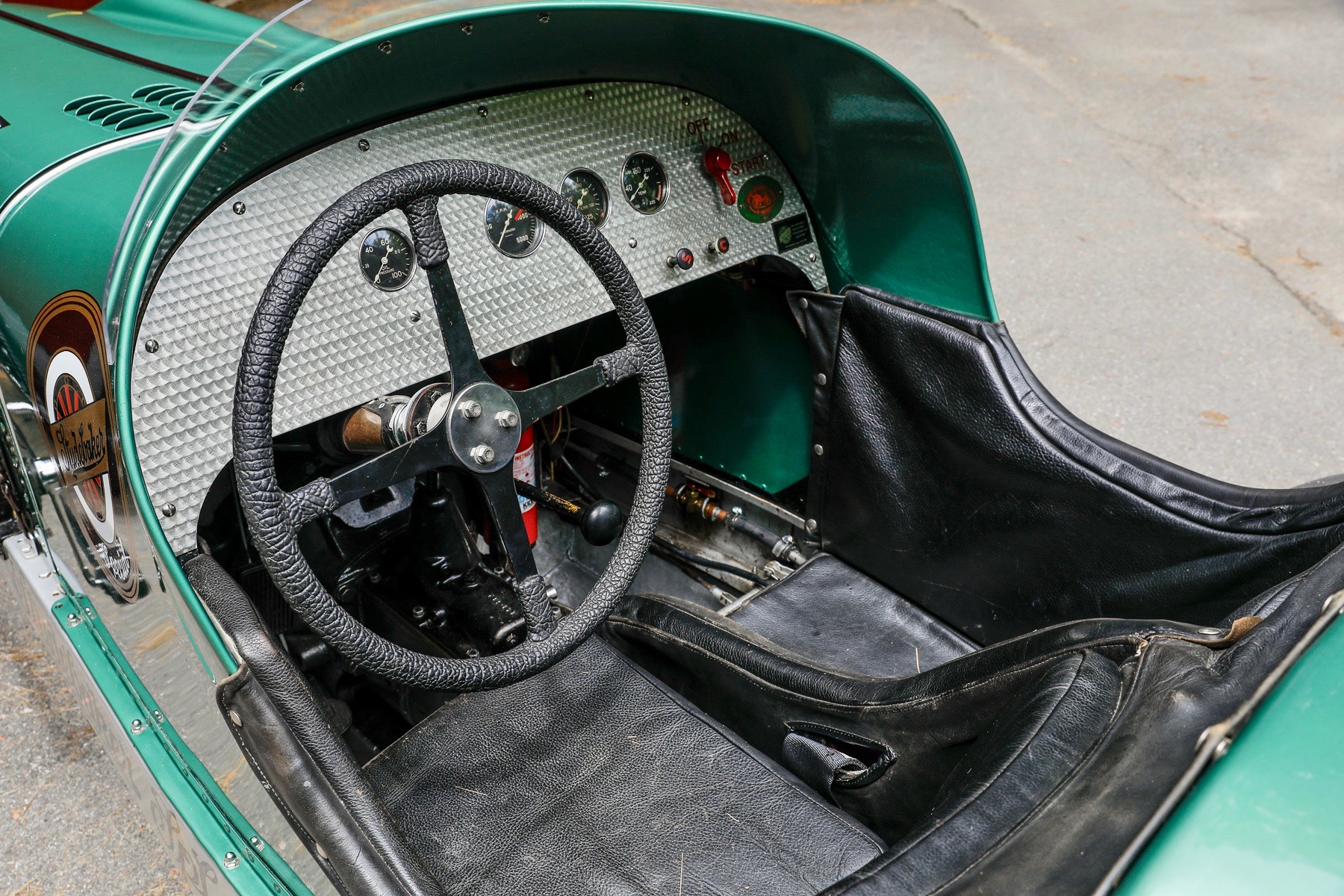 After that race, Jenkins took the car back to his home in Utah, made occasional runs at Bonneville and then made it street legal and used it as a sports car through 1939 before selling it to W.J. Patterson. Patterson sold the car around 1960 to Ray Donald, who parked it in his back yard in Los Angeles.

The car was rescued in 1972 by Stanley B. Smith, former director of the Antique Automobile Club of America. Smith was a self-proclaimed “Studebaker nut” who had seen the car racing when he was a teenager. Smith had the car restored to its 1932 specification.

In 1988, Studebaker collector Robert Valpey purchased the car from Smith and used it in vintage races and at concours, including Pebble Beach in 2016. Valpey died earlier this year. He was 83.

The National Motor Museum at Beaulieu, England, has opened an exhibit featuring cars from the new Top Gear television series. Cars from the show’s Series 27 include Paddy McGuinness’ Overtaker hearse, vehicles that survived the Borneo jungle challenge, and an electric-powered Triumph Spitfire and a Subaru Brat with the motor from an electric Nissan Leaf hidden inside.

The National Automobile Museum in Reno, Nevada, hosts a National Collector Car Appreciation Day show on July 12, starting at 9:30 a.m. Also Friday, the AACA Museum in Hershey, Pennsylvania, will offer rides in some of its cars from noon until 2 p.m. as part of the collector day celebration. And on July 13, the AACA will host a Cadillac & LaSalle Club Show from noon until 2 p.m.

Buckler’s Hard, the maritime museum affiliated with Britain’s National Motor Museum at Beaulieu, welcomes the arrival of a tall ship, a full-scale replica of the HMS Pickle, famed from the Battle of Trafalgar, as well as a model boat display on July 13-14. The Pickle will be open for tours.

On July 13, the Mercedes-Benz Museum in Germany hosts an open-air dance party featuring salsa, bachata and merengue-style music under the theme of “Caribbean flair in the Neckar Valley.”

July 13-14 is a “Hoods Up” weekend at the Newport Car Museum in Rhode Island with the engines in more than 75 vehicles exposed for viewing.

The Harley-Davidson Museum in Milwaukee hosts “Send Me Back” Saturday from 9 a.m. until 4 p.m. on July 13 featuring the Wild Ones: Vintage Motorcycle Rally on its campus. The lineup includes the 17th annual Knucklehead Company Reunion, Antique Motorcycle Field Games, and the Victor McLaglen Motor Corps stunt and drill team.

The California Agriculture Museum in Woodland, California, hosts a “hit and miss engine demo” from 10 a.m. until 4 p.m. on July 13 featuring the Branch 158 Early Day Gas Engine and Tractor Association.

The National Motor Museum at Beaulieu, England, ends its sculpture exhibition on July 14.

The Blackhawk Museum in Danville, California, stages a fund-raising event from 5 to 8 p.m. July 15 at Gianni’s Italian Bistro with proceeds benefiting the museum’s children’s education and transportation fund, which provides for Bay Area students to visit the museum’s galleries, which include displays on the Old West.

The Automotive Hall of Fame in Dearborn, Michigan, inducts new members Sergio Marchionne, the late chief executive of Fiat Chrysler Automobiles; Janet Guthrie, the first woman to qualify as a driver in the Indianapolis 500; Richard “Dick” Dauch, co-founder of American Axle Manufacturing; and Patrick Ryan, creator of the first auto dealership finance and insurance department, on July 18 in Detroit.

“Women Who Motor,” an exhibit that debuted at the Edsel and Eleanor For House, makes its debut July 19 at the Gilmore Car Museum in Hickory Corners, Michigan. The exhibit features women who have made an impact on the automobile as inventors, engineers, designers, racers and consumers.

The Simeone Foundation Automotive Museum in Philadelphia will feature “Mini Matchup,” an exhibit of classic and contemporary Mini Coopers from July 20 through August 4.

From the 1960s into the 1990s, the Hale Farm & Village in Cleveland hosted a car show. On July 21, the tradition returns with a car show that will include vehicles from the Crawford Auto-Aviation Collection and those from private collections and other entrants parked among the farm and village’s historic buildings.

The California Automobile Museum in Sacramento hosts a special Amphicar event on July 21 with owners of the aquatic vehicles offering rides on the Sacramento River.

It’s the 31st annual Mopars at the Red Barns car show and swap meet, July 27 from 9 a.m. until 4 p.m. at the Gilmore Car Museum in Hickory Corners, Michigan.

The Petersen Automotive Museum in Los Angeles will host a two-day Zora Duntov Tribute weekend July 27-28 with a Corvette rally, cruise-in and other events.

The British Motor Museum hosts “the biggest rally of classic Fords in the UK” on July 21. More than 400 classic Ford vehicles, all between 50 and 100 years old, are expected for the 11th annual “Old Ford Rally,” which this year includes the Capri’s 50th anniversary and the Sunbeam Alpine’s 60th birthday celebrations.

Stahls Automotive Museum in Chesterfield Township, Michigan, hosts its annual “Autos for Autism” fundraiser and cruise-in for the Ted Lindsay Foundation from 4 p.m. to 8 p.m. on July 25. Wayne Carini of Chasing Classic Cars and Detroit Red Wings player Dylan Larkin are scheduled to be special guests at the event.

Starting at 5:45 p.m. on July 27 and running until 8 a.m. the following morning, youngsters ages 10-13 can spend the night at the BMW Museum in Germany. Among the activities scheduled will be moviemaking, with the young visitors shooting their own short films with the help of a stop-motion app, and then they’ll watch their flicks on a big screen while enjoying popcorn and beverages.

The Britain’s National Motor Museum at Beaulieu celebrates the 50th anniversary of the Nissan GT-4 and the 30th birthday of the Mazda MX-5 at its Simply Japanese cars how on July 28.

Electric supercars will be featured August 3-4 when the National Motor Museum at Beaulieu hosts its Supercar Weekend. EV Evolution will be a new feature at the show, which also expects several hundred petroleum-powered exotic machines.

The Gilmore Car Museum in Hickory Corners, Michigan, stages its annual Red Barns Spectacular car show on August 3. More than 1,200 vehicles are expected, including special displays by the Tin Can Tourists and of antique boats and bicycles, as well as 380 swap-meet vendors.

August 9-11 is VW T Chill Weekend at the National Motor Museum in Beaulieu, England, where VW Transporter owners will be camping out in their vehicles. The weekend includes a cruise to Buckler’s Head and other family-oriented activities.

The British Motor Museum stages its sixth “Buses Festival” on August 18, with visitors exploring around 100 restored, vintage and modern buses, even riding on routes around the Gaydon area.