Generally speaking, people buy large SUVs for a specific purpose, which is hauling large loads of people and their stuff.  Sure, there’s a certain swagger to the upmarket big dogs, exemplified by the Cadillac Escalade, but by and large, the full-size SUV is a utilitarian vehicle no matter the level of trim or prestige.

And rarely, it would seem, is a full-size, three-row SUV purchased for its high performance.

Which brings us to the 2019 Mercedes-Benz AMG GLS 63, which is nothing less than a supercar among big SUVs, powered by a 577-horsepower twin-turbo V8, a remarkably advanced suspension and a hedonistic load of luxury features.

While a motorsport-infused family hauler might not be on everyone’s radar, the GLS 63 should lessen the burden for those driving enthusiasts who desire a sports car but require the plus-size practicality of a seven-passenger SUV.  This one delivers the performance of a muscle car so that, as compromises go, not too shabby.

From the magic of AMG, Mercedes-Benz’s motorsport division, comes a 5,750-pound SUV that can deliver a zero-60 sprint of 4.5 seconds and a top speed electronically limited to 168 mph, according to the manufacturer.  Yes, that’s serious muscle and should get you to the lakeside cabin in record time, kids and vacation gear intact.

The GLS 63 also handles amazingly well, with quick cornering and back-road composure even as you challenge the twisties, limited only by the little voices that cry out, “Dad, we’re getting squished back here.” 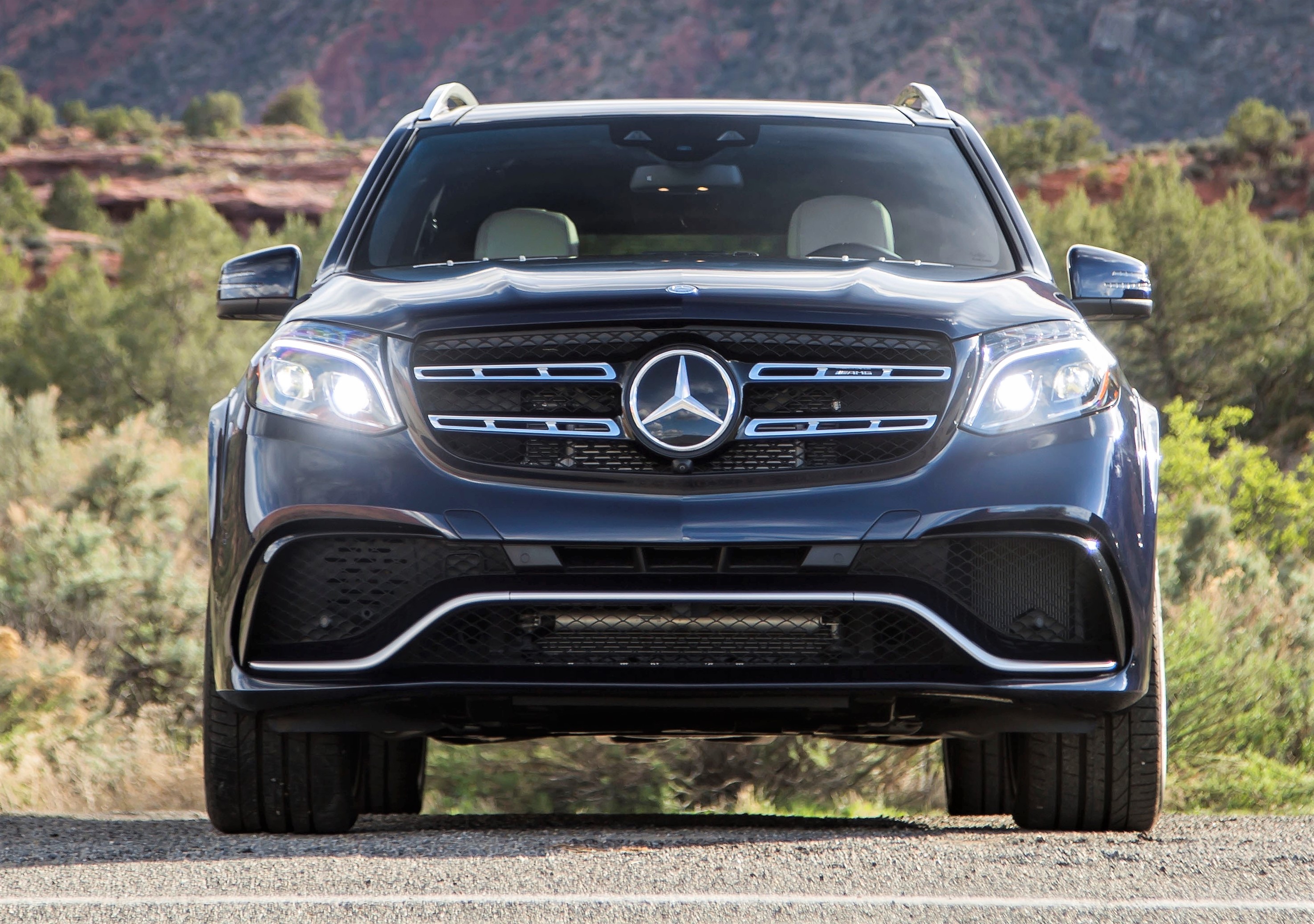 The base price of $126,150 should keep out the riffraff, with the test car equipped with such options as a $4,550 Bang & Olufsen Beosound audio system, $1,750 worth of carbon-fiber interior trim, and a $500 AMG steering wheel. Combined with a few sundry options such as heated and cooled cupholders ($180), that brought the bottom line to a resounding $137,005, including delivery.

You’d also need to set aside some extra cash for fuel as the GLS 63 is rated by the EPA at just 13 mpg city, 18 highway and 15 combined.

But let’s ditch this crass money talk and speak instead of the engineering marvel that is the AMG GLS 63.  AMG has already wowed us by tuning the tall, boxy G-Class SUV for high-performance, so it would only seem natural that the GLS would get a hot version to raise the profile of the more-normal renditions of the full-size luxury SUV.

Mercedes calls GLS the largest and most-luxurious SUV that the German automaker has ever produced, the “S-Class of SUVs,” comparing it with its top line of passenger cars.  The AMG GLS 63 is a niche model of the production lineup since for most drivers, the performance of the regular-duty GLS would be plenty.

Although, it is impressive how brilliantly the GLS 63 drives.  Despite its bulky size and bulbous dimensions, it performs like a dialed-in sports sedan, with crisp handling and that stunning acceleration.  The response is adjustable by the driver for comfort, sport and sport-plus, with even the comfort mode feeling reasonably firm and well-planted. 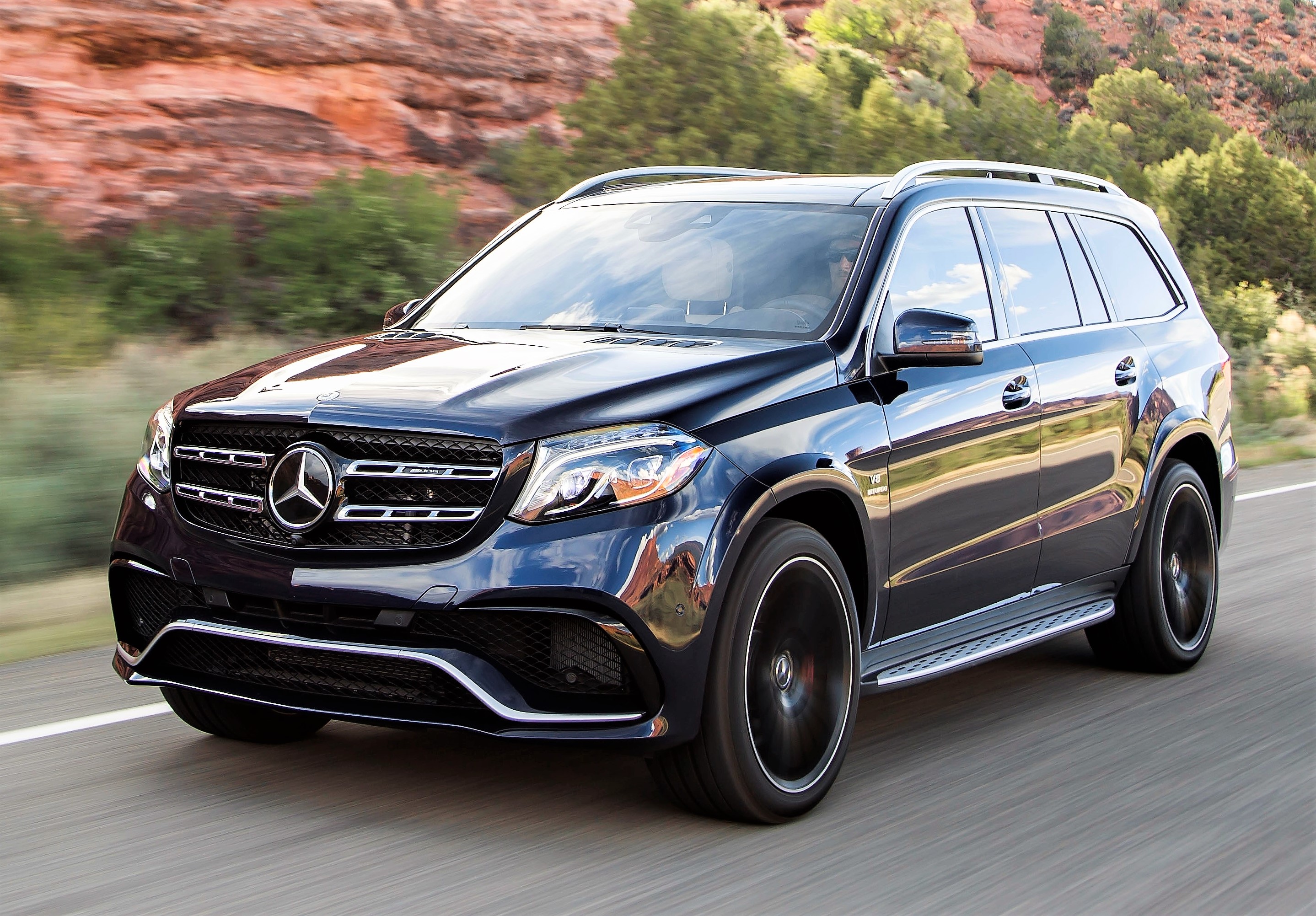 The engine power is fairly enormous, rocketing this behemoth very swiftly past legal speeds, the “Speedshift Plus” automatic transmission banging swiftly through the gears.  Matter of fact, it’s hard to keep this SUV within reasonable approximation of the speed limit. Driving in speeding-ticket territory and above is way too easy.

Patience is required because it’s hard to keep your foot out of it, rousing the beast with a guttural roar and a push in your back.

Meanwhile, you and your passengers are coddled in luxury, although with sporty embellishments befitting the AMG character – the optional carbon-fiber and piano-black trim looked very cool in the leather-lined test SUV.  The “multicontour” front seats with built-in massage are also quite nice.

Naturally, the GLS was absolutely loaded with features, most of them accessed via the large video screen.  There was a lot here, and it took some exploration to figure things out.  Some of the access is fiddly, although a well-designed center-console-mounted rotating knob is helpful for adjustments while on the move.

There are plenty of bragging rights inherent in the AMG GLS 63, and there undoubtedly will be those who buy them purely to show off.  That’s a shame since it is such an impressive machine with excellent driving characteristic, especially for a great, big SUV.

Even so, one has to wonder. If you had such money to spend, why not get a regular SUV or even a minivan for hauling duties while treating yourself to a hot sports or muscle car for driving fun?  Why combine these two divergent purposes into one extra-large performance wagon?