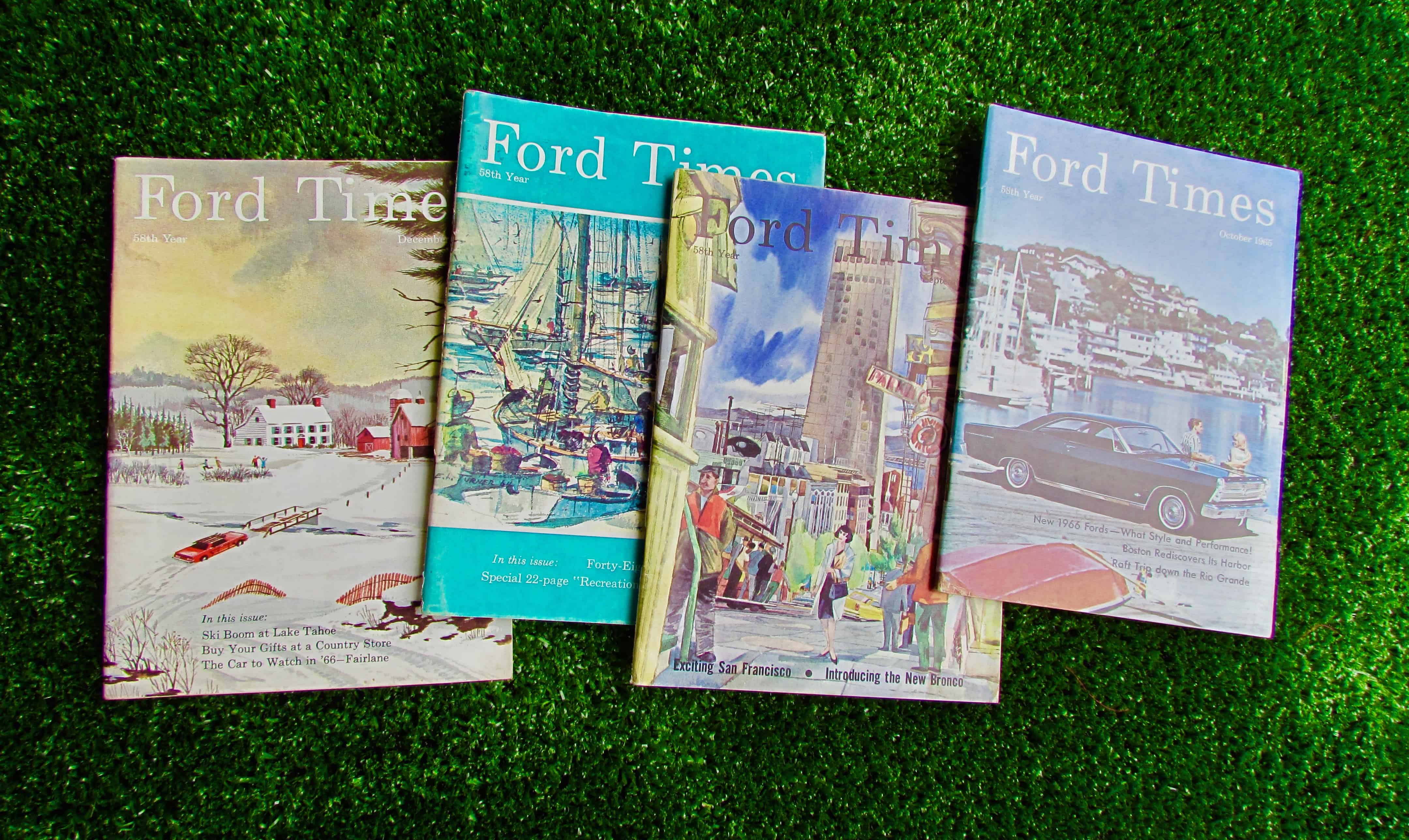 There were many things I liked about going to my grandparents. Grandma always had a candy dish with those sugar-coated orange slices, or sometimes it was orange circus peanuts. She also made the best peach cobbler on the planet and had this way of pressing hamburger meat into slices of bread and then cooking them open face under the broiler.

Grandpa, who my Mom always said was born in the wrong place and time to have been one of the cowboys he read about in all of those Western novels he so enjoyed, did train his horse, Tuffy, to do tricks. He would entertain my cousins and me — and terrify our mothers — by having us take a length of paper between our teeth which he would use a Western-style whip to whittle down to where there was barely enough to spit out.

We’d stand there in full confidence, and not once did that whip touch any of our noses.

But there was at least one other thing about my grandparents’ house I fondly remember. When we went there, I got to read the Ford Times.

Before I saw my first copy of Car and Driver or started reading the auto and motorsports features in True magazine at the barber shop, I got, as Ford put it, a “view of America through the windshield” by reading the Ford Times, a monthly, 64-page magazine, each of the pages measuring 5 by 7 inches.

I’m not sure how we got onto the subject, but Bob Golfen and I recently were reminiscing about the Ford Times, and I found someone on eBay offering to sell six issues from 1965 for $8, plus shipping. It turns out the content is even better than I remembered, though I didn’t remember how little of that content was about Ford’s newest vehicles, how much the magazine was about camping, or how the editors preferred original paintings to photography (and I wonder what those original illustrations might be worth in today’s art marketplace).

The magazine debuted in 1908, basically as a way for Ford to communicate with employees and dealers. Publication ceased during World War I and didn’t resume until 1943, and after the war with the emphasis on Ford vehicle owners who were encouraged to explore America in their cars. Publication ended 50 years later as part of a corporate cost-cutting program.

At its height, Ford Times was sent to 2 million households and featured stories by the likes of Faulkner, Steinbeck, Ogden Nash, Earl Stanley Gardner and E.B. White, illustrated by some of the country’s best illustrators and artists.

There’s a delightful retrospective on the internet about artist Charlie Harper, who contributed artwork to more than 120 issues between 1948 and 1982.

The magazine and its history and cultural role also are the subject of a 224-page (yet surprisingly easy and rapid reading) doctoral dissertation in 2012 by Rebecca Dean Swenson of the University of Minnesota.

My grandparents started receiving the magazine in 1957 when my grandfather bought a red-and-white Ford sedan, 3 on the tree and V8 engine. Two years later that car became my grandmother’s when grandpa bought a more upscale ’59 Ford Fairlane (or perhaps even a Galaxie?) in black and gold, and with an automatic transmission.

I pretty much learned how to drive in grandma’s ’57, and it was probably in 1963 that the Ford Times started coming to our house when my parents  — much to my surprise and delight just a few months before I’d get my license — bought a ’64 Falcon Futura convertible (red with white top).

Those Ford Times I recently acquired provided a wonderful and nostalgic trip back to my youth, an appreciation for the fact that a car magazine (or perhaps even an auto-oriented website?) can be about much more than just cars, and to wondering why publications such as the Ford Times are a thing of a bygone era.