1950 Ford gets the ‘kustom’ treatment 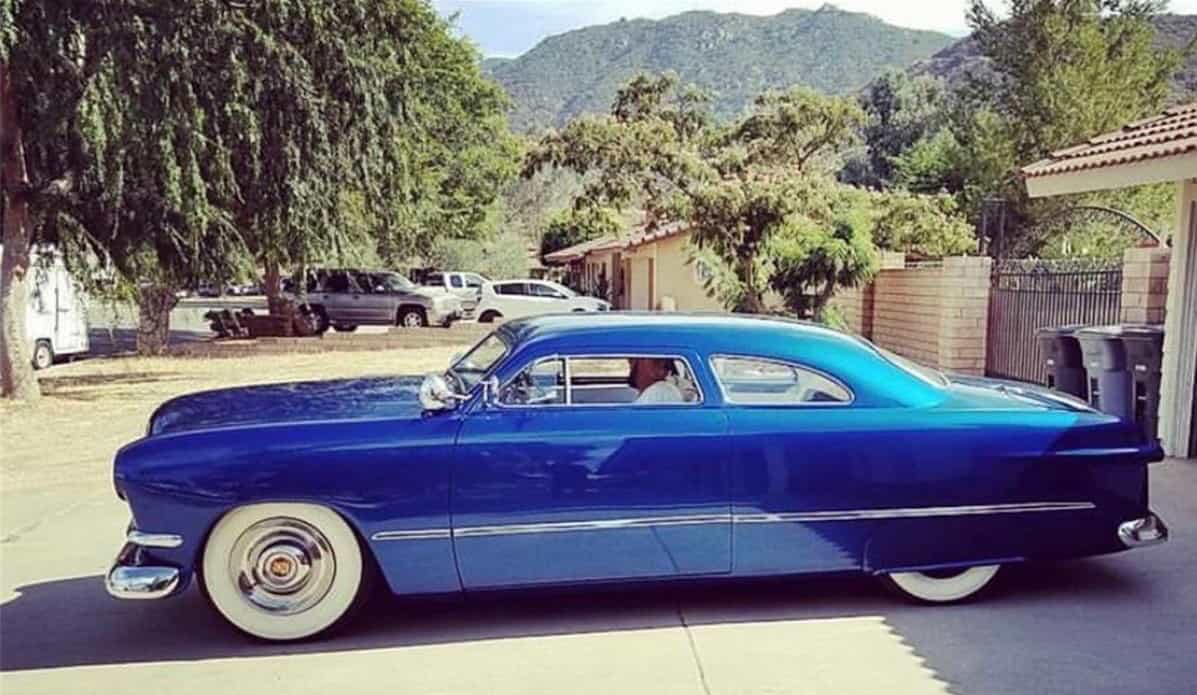 Pick of the Day is a 1950 Ford Tudor sedan, though it doesn’t look much like the other hundreds of thousands that rolled out of Ford assembly plants.

This one has been highly customized and was featured on the cover of Kustoms Illustrated magazine as “Greg Evans’ Chopped ’50 Ford Shoebox.” 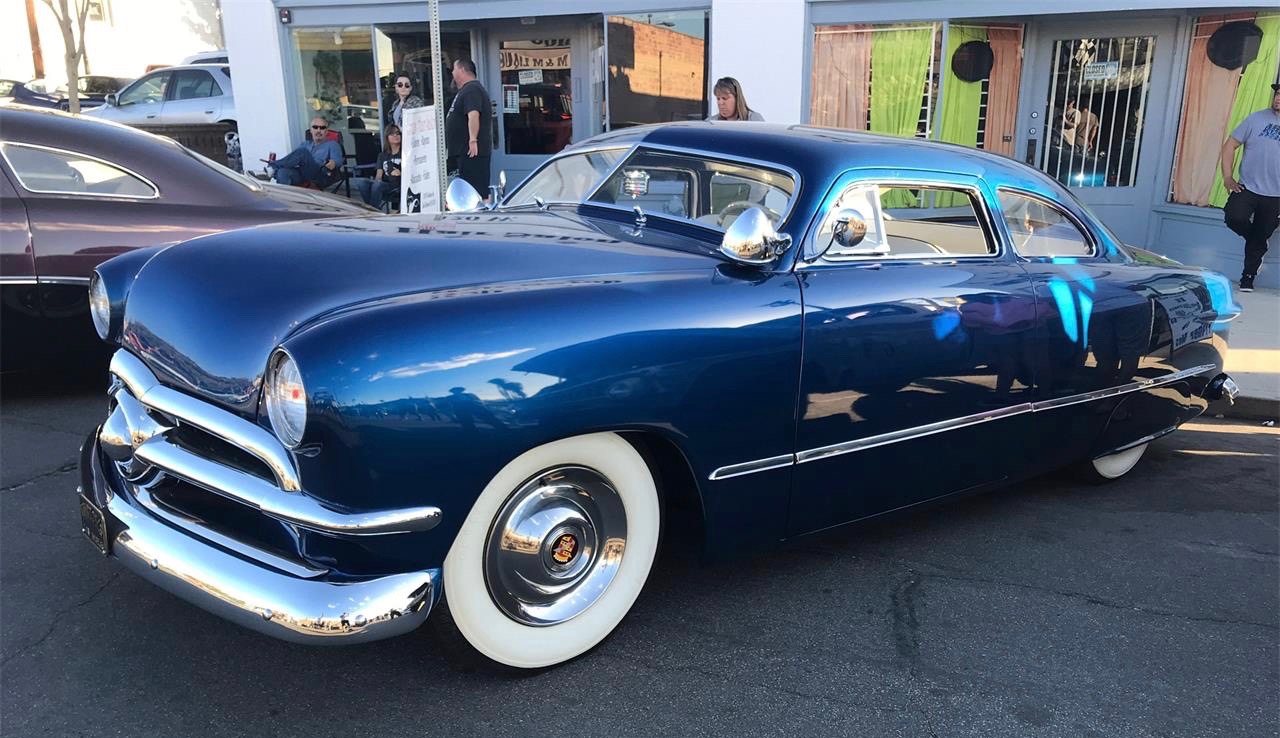 “Greg Evans is no stranger to owning some very cool cars over the years, and his latest kustom is no exception,” reports the private seller advertising the car on ClassicCars.com.

“After cruising around in a mid-’60s Cadillac, Greg had the urge to build a shoebox Ford with a nice chop and traditional body modifications,” the seller continues. “Through mutual friends, Greg teamed up with King Kustoms in Temecula to search for a ’49-’51 Ford Tudor Sedan to build into a kustom.

“Mark Nimmo of Costa Mesa, California, happened to be selling his daily driver ’50 Ford that already had a 302 cid V8 engine, C4 (automatic transmission), and 8-inch Ford rear end. The timing was perfect and the car was delivered to Rob Radcliffe to start the metal work.”

The body was reported to be in “pretty good condition” with the usual rust repairs needed — rockers, passenger-side rear quarter panel, some patches in the floor. 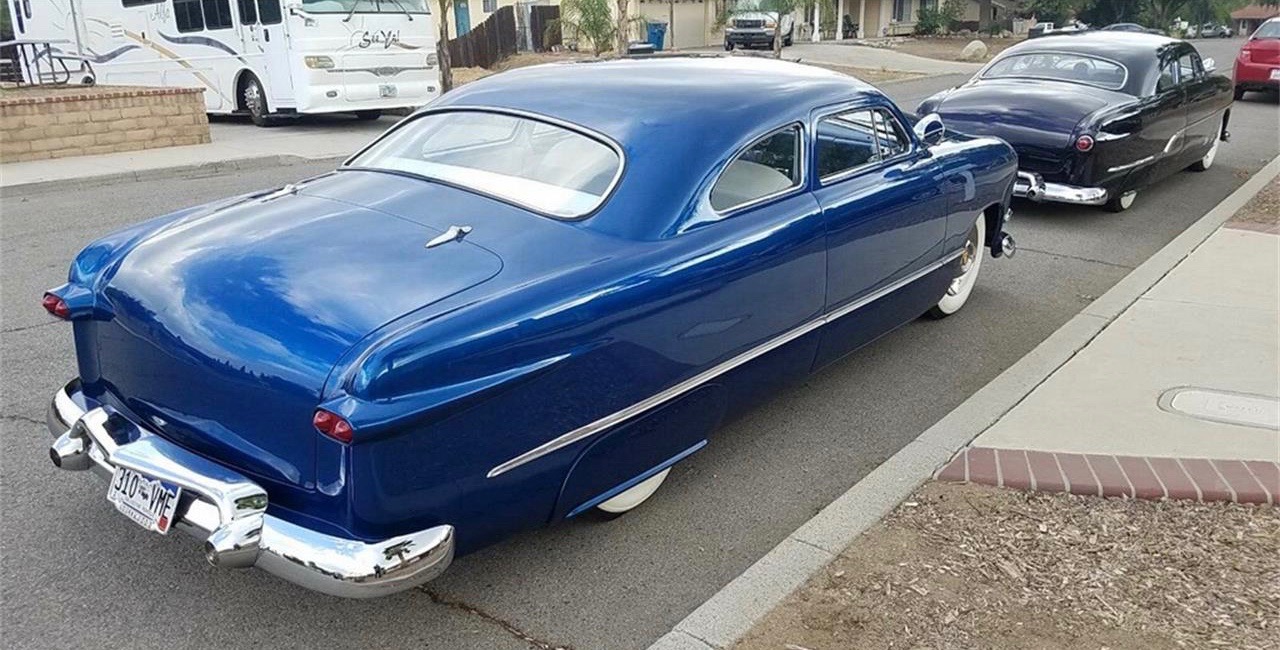 “At the time, the rear floor was tunneled to clear the driveshaft and a new trunk floor was built to cover the step notch in the frame. Once the structural metal work was completed, the fun part began on the outside with a pair of ’52 Merc head light bezels that were frenched and pulled in ½”. The stock grill was retained with shaved parking lights and the front valance was molded to the fenders. Out back, a pair of ’50 Buick tail lights were frenched into handmade openings that were blended into the stock shoebox Ford wind-splits.”

At King Kustoms, Rob Radcliffe chopped the top 5 ½ inches and added slanted B pillars and an extended catwalk.

“The front windshield was opened up into the roof crown for better visibility and the drip rails were shaved for a completely smooth look. The rear window was brought down to the belt line to resemble a coupe. All of the original stainless window trim was chopped down and replaced along with the vent windows. To top it all off, the inside window frames were metal-finished and chrome-plated. Buena Park Chrome did all of the chrome and stainless work on Greg’s Ford. 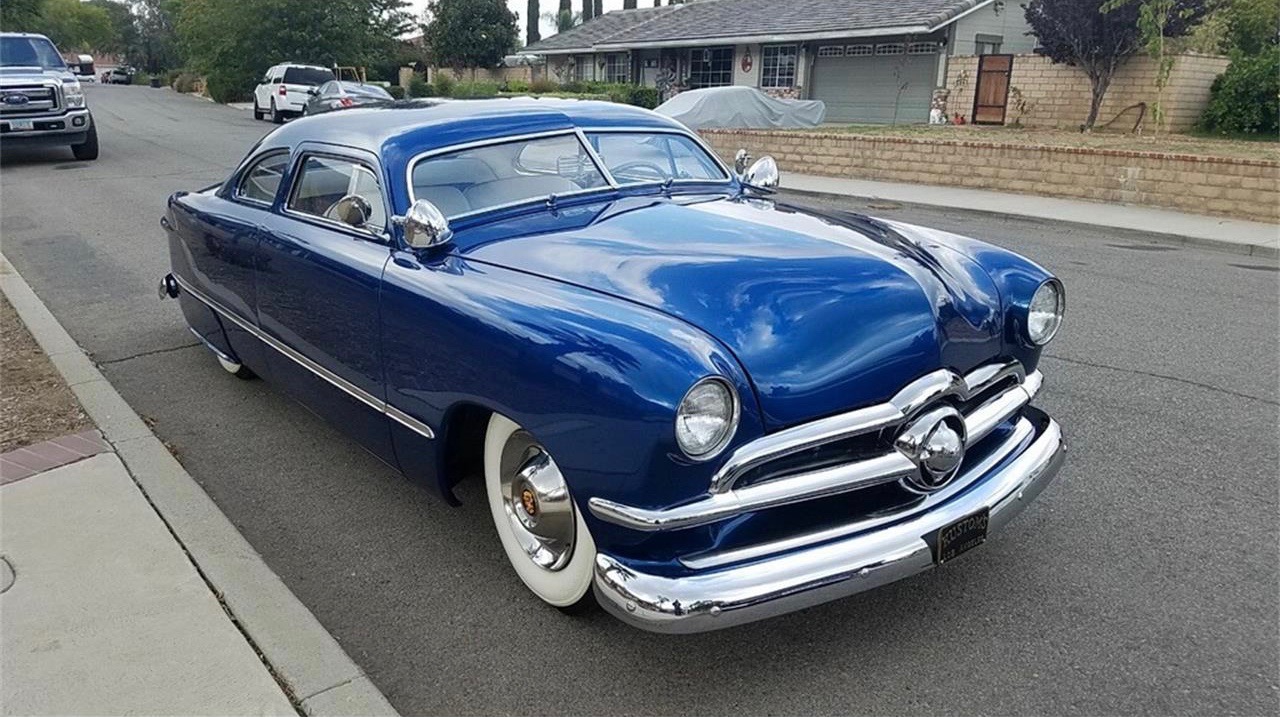 Zbest Paint and Body in Lake Elsinore, California, was the car’s next stop. Custom-mixed metallic blue was prayed. From paint, the car went down the street to Junior’s Upholstery for blue-and-white diamond-tuck interior.

King Kustoms next rewired the car, added heater and air conditioning, etc. The car was then tuned by Eddie at Temecula Transmission.”

The car is located in Temecula and is being offered for $58,000.