The Lamborghini Museum at Sant’Agata Bolognese in Italy has updated its look and rebranded itself as MUDETEC, the Museum of Technology, with a new interactive space designed to reveal “the secrets of Lamborghini and its world through the innovations and tales of excellence that not only revolutionized the company itself, but the entire panorama of the automotive industry, creating concepts and casting foundations for the design and technology of tomorrow.” 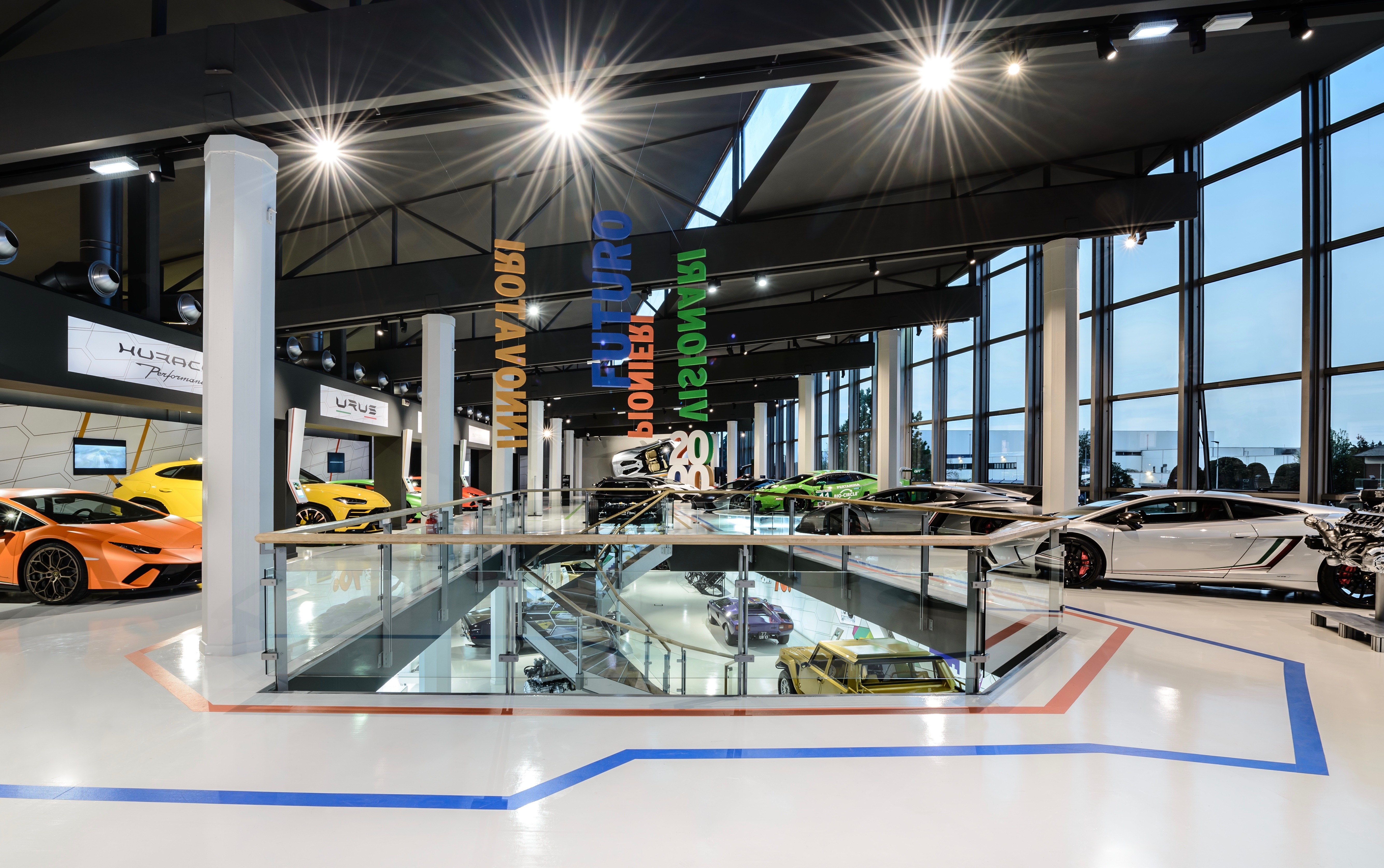 To help launch the effort, the museum has opened a new exhibition, “Future Shapers since 1963,” which presents “a virtual journey through the decades, with a focus on vehicles that revolutionized the marque at the time they were built. Visitors explore exhibits through the support of special installations and touch screens offering access to information, photos, original sketches and videos.”

“Future Shapers since 1963” will be on display until October 31, the museum said.

The museum also has a driving simulator and also offers tours of the Lamborghini production line.

More than 40 vehicles that have played roles in science fiction films will be featured in a new exhibit, “Hollywood Dream Machines: Vehicles of Science Fiction and Fantasy,” opening May 4 at the Petersen Automotive Museum in Los Angeles.

The exhibit, which will include artwork, props and costumes that also explore “the speculative fiction genre,” is being organized in collaboration with the Comic-Con Museum.

“Key vehicles on display will include the Warthog from Halo, the 2035 Audi RSQ from I Robot, the time machine from Back to the Future, the Weyland Industries RT01 Group Transport from Prometheus, the 2008 Audi R8 from Iron Man, Bumblebee from the Transformers series, the GM Ultralight from Demolition Man, Batmobiles, and more,” the museum announced.

“Hollywood Dream Machines’ will be the biggest exhibit of our 25th anniversary,” added Terry Karges, the museum’s executive director. “With more than 40 vehicles from the silver screen spread across the museum, the exhibit is an ode to the industry that Los Angeles was built upon.”

The exhibit, which runs through March 15, 2020, also will feature Microsoft HoloLens mixed-reality experiences providing immersive technology to “see the Warthog from Halo and the Back to the Future time machine in a whole new way,” the museum promises.

The Petersen also has announced that Bring a Trailer has become the title sponsor of the museum’s Breakfast Club Cruise-In events, which are held the last Saturday of each month.

The AACA Museum in Hershey, Pennsylvania, opens its spring exhibit — Studebaker Cool — on May 17 with a special program from 5:30 to 9 p.m. The exhibit is being held in conjunction with the Studebaker National Museum in South Bend, Indiana. The exhibit runs through October 20.

Also available for viewing at the AACA Museum will be “Harley-Davidson: History, Mythology, and Perception of America’s Motorcycles,” a Raymond Loewy retrospective, and a display of vehicles curated by the Keystone State Chapter of the Pontiac-Oakland International.

With Chevrolet finally announcing the unveiling of the eight-generation and mid-engine Corvette, the National Corvette Museum in Bowling Green, Kentucky, has added the XP-897 GT, a mid-engine rotary-powered 1973 concept car, to its display.

“This car was saved by Tom Falconer of England after GM decided to crush the car,” the museum said in unveiling the prototype. “The car had been stored in a crate at Vauxhall awaiting its date with the crusher, however, Tom was able to meet with Chuck Jordan, head of Styling for GM, to get approval to save the car.”

The museum also has added another astronaut-owned Corvette to its NASA special exhibit. The newest addition is owned by Apollo 15 astronaut David Scott.

Five vehicles owned by the late Carl D. Smith are on temporary display at the Miles Through Time car museum in Toccoa, Georgia. The cars include a 1940 Ford 2-door sedan, a 1972 Chevrolet Chevelle Malibu, a 1964 custom C10 pickup truck, a 1964 Chevrolet El Camino and a 1985 Ford Mustang GT.

But what makes these cars so special and worthy of museum display?

“Carl D. Smith was an avid car enthusiast, who took great pride in the ownership of classic cars,” the museum said. “For over fifty years, he owned a car dealership on Yow Mill Road in Toccoa, as well as painted cars for the general public.

“After the passing of his fine man, his four daughters — Connie, Sharon, Lisa and Cathy — have all chosen to display these cars… as a celebration of his legacy… a testament to a lifetime of his love of automobiles.”

The Crawford Auto-Aviation Museum in Cleveland hosts a Crawford, Coffee & Cars event April 20 from 8 a.m. until 11 a.m. that includes admission to various museums at the Cleveland History Center.

RM Auctions presents a Cars & Coffee gathering April 20 from 9 a.m. until 11 a.m. at the Auburn Cord Duesenberg Museum in northeastern Indiana. Featured will be the 2019 Chevrolet Corvette that is being raffled off to benefit the museum. Also present will be an American Red Cross Bloodmobile.

The National Corvette Museum Motorsports Park in Bowling Green, Kentucky, hosts the Michelin NCM Bash 2019 from April 25-27 with displays, seminars, and other activities, from a “ladies oasis” to laps around the track.

The AACA Museum in Hershey, Pennsylvania, is organizing a bus trip to the New York International Auto Show on April 27.

The Lingenfelter Collection in Brighton, Michigan, hosts its annual Charity Spring Open House event April 27 from 10 a.m. until 5 p.m. Ken Lingenfelter’s collection of more than 180 vehicles will be open to the public to benefit the American Cancer Society.

“Mario Andretti: ICON” is a special exhibit that opens May 1 at the Indianapolis Motor Speedway Museum. The exhibit is designed as a comprehensive 50th anniversary celebration of Andretti’s victory in the 1969 Indianapolis 500 race.

The NASCAR Hall of Fame museum in Charlotte, North Carolina, opens a special “RCR 50: Only in America” exhibit featuring 50 years of Richard Childress Racing in May.

“My dream is longer than the night,” a radio play about Bertha Benz and her influence on the early motorcar, will be performed May 3-5 at the Mercedes-Benz Museum in Germany.

The National Corvette Museum NCM Motorsports Park hosts an Auto-X autocross event May 4. “No classes. No course working. No trophies. No drama,” the museum said of the program designed “for folks who just want seat time.”

More than 40 vehicles that have played roles in science fiction films will be featured in a new exhibit, “Hollywood Dream Machines: Vehicles of Science Fiction and Fantasy,” opening May 4 at the Petersen Automotive Museum in Los Angeles. the exhibit runs through March 15, 2020.

The Simply Ford gathering May 5 at Britain’s National Motor Museum at Beaulieu will feature the 60th anniversary of the Ford Anglia 105E and the 50th birthday celebration for the Ford Capri.

“Tucker: The 50 Production Cars” is the subject of a special program May 11 at the AACA Museum in Hershey, Pennsylvania, where one of Preston Tucker’s grandsons will be among the speakers.

The Indianapolis Motor Speedway Museum will stage a special Speedway Cars & Coffee event May 11 limited to the first 100 registered cars. The car show runs from 9 a.m. until noon, but those registered can partake in a full day of activities at the track, where the Indycar Grand Prix starts at 3:30 p.m.

The Murphy Auto Museum in Oxnard, California opens its new Fireball Gallery of automotive art with a special event from 6 until 10 p.m. on May 11.

The British Motor Museum stages its fifth annual “Gaydon Land Rover Show” on May 11-12 with a special appearance on May 12 by the Ferguson 4 Wheel Drive Club and its vehicles.

The Murphy Auto Museum in Oxnard, California opens its new Fireball Gallery of automotive art with a special event from 6 until 10 p.m. on May 11.

LeMay – America’s Car Museum in Tacoma, Washington, opens its “Cadillac – Standard of the World” exhibit with a “Champagne and Cadillacs” event from 9 a.m. until 11 a.m. on May 11.

“Colors of Speed — 50 Years of the 917,” a special exhibition of 10 of the famed Porsche racing cars, opens May 14 and runs through September 15 at the Porsche Museum in Germany.

The National Corvette Museum in Bowling Green, Kentucky, hosts the C4 Gathering from May 16-18.

The AACA Museum in Hershey, Pennsylvania, opens two new summer exhibits on May 17 — Studebaker Cool: 114 Years of Innovation, and Harley-Davidson: History, Mythology and Perceptions of America’s Motorcycle. Both exhibits run through October 20.

Britain’s National Motor Museum at Beaulieu hosts both its silver-anniversary spring autojumble (swap meet) May 18-19 and a 60th anniversary celebration of the Mini.

The IMS Museum presents the 21st annual Indianapolis Historic Racing Exhibition on May 23-25 when around 70 Indianapolis 500 racing cars are expected to return to the track for exhibition laps and to be displayed in the museum parking lot inside Turn 2. The event is open to cars that raced at Indy between 1911 and 1994.

The Maritime Aquarium in Norwalk, Connecticut, will stage its second “Barracudas, Sting Rays & More Show Cars from the Sea” car show on June 8.

Britain’s National Motor Museum and the Montagu home at Beaulieu will host a major exhibition of sculpture from May 25 through July 14. “Sculpture at Beaulieu” will feature more than 350 works by more than 60 sculptors.

LeMay Collections in Tacoma, Washington, stages LeMay Motorcycle Days from June 13-23 with 200 motorcycles on exhibit and with rounds of motorcycle soccer.

The Blackhawk Museum in Danville, California, will stage its annual Father’s Day car show on June 16.

The Miles Through Time museum in Toccoa, Georgia, hosts its second annual car show from 9 a.m. until 1 p.m. on June 22.

The Murphy Auto Museum in Oxnard, California, hosts its seventh annual vintage trailer show from 10 a.m. to 4 p.m. on June 29, with more than 40 vintage trailers and campers on display.

The Automotive Hall of Fame in Dearborn, Michigan, inducts new members Sergio Marchionne, the late chief executive of Fiat Chrysler Automobiles; Janet Guthrie, the first woman to qualify as a driver in the Indianapolis 500; Richard “Dick” Dauch, co-founder of American Axle Manufacturing; and Patrick Ryan, creator of the first auto dealership finance and insurance department, on July 18 in Detroit.