The Motegi Super Drift Challenge is an invitational drifting event to be held on Friday night April 12th, at 7:30 p.m. and Saturday April 13th at 6 p.m. PST on the course used the previous weekend for the Formula Drift event at Long Beach, California. Eight drivers are invited, based on availability and putting on the best show with the vehicles least damaged the previous weekend.

The drivers selected this year are:

The course features an Initiation point, Acceleration and Deceleration zones, a pair of Touch-&-Go points, Outside zones, and one inside clipping point. 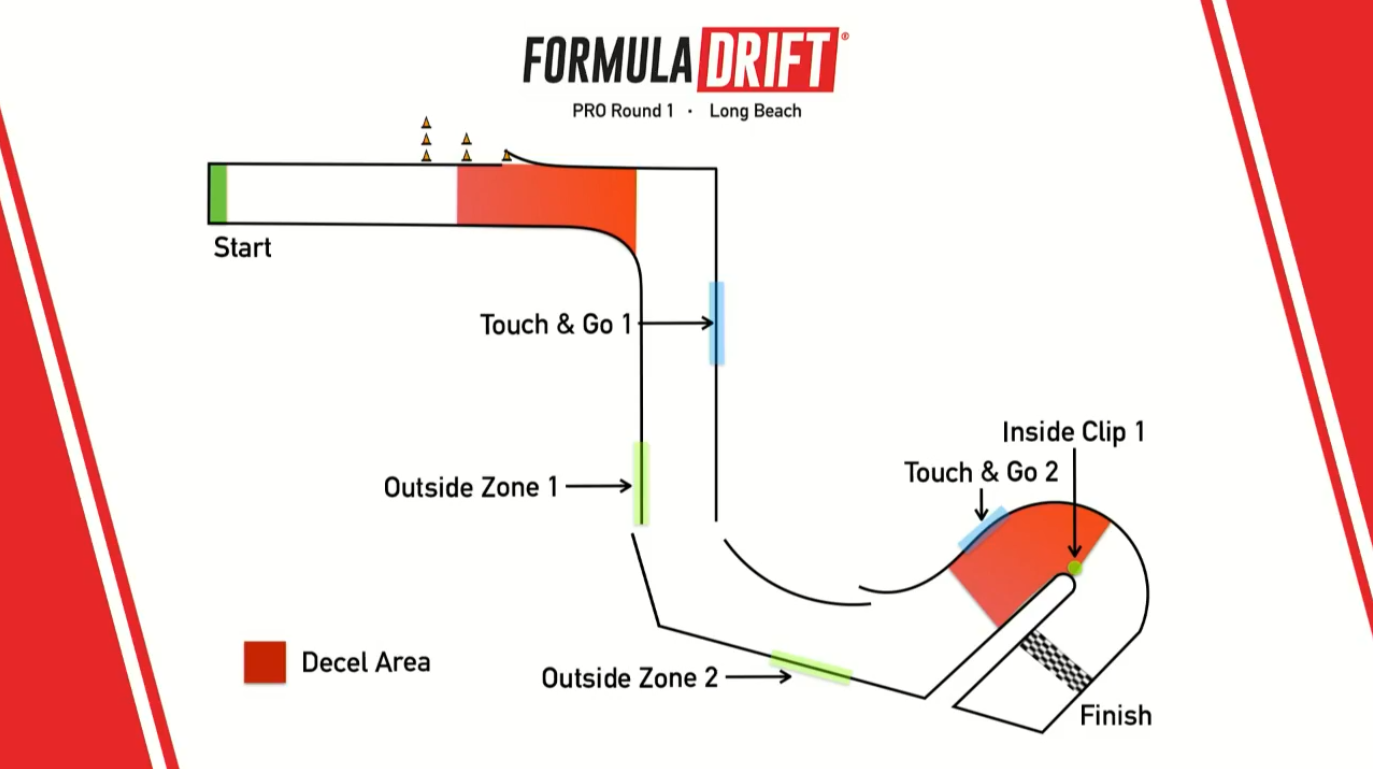 At the start line the drivers line up side by side. The driver on the left always goes first. In front of the left driver is a set of cones making a small chicane. This is to prevent the lead car from making a drag race-like launch to try to get away from the chase car.

The start-line operator tells the judges the drivers are at the line. The judges tell the operator when they are ready to send the cars. The operator verifies each driver is ready and then starts the light-tree countdown.

The chase driver is allowed to roll off the light to get a good start keeping close to the lead driver navigating through the coned bend, however, if any of the cones get knocked over, the drivers must turn back and restart.

Once the drivers are on their way, they speed down the straight into the initiation zone, which is indicated by the set of 3 cones and then pair of cones and then the single cone, all set off to the side for the drivers to see. They both must be initiating into a drift no later than the last cone. This is when they enter the first deceleration zone.

This is where it is okay to slow down while sliding along the course into the first corner. They cannot go too slow or it could be considered a failure on the lead driver to maintain a minimum expected speed, interrupting the flow of the battle, thus losing the advantage.

After the initiation slide, they enter the first acceleration zone where they hammer the throttle, accelerating sideways to the Touch-&-Go where each driver must bring the rear of the cars as close as possible to the wall and then transition to Outside Zone 1, again swinging the rear of the car into a drift to get close to the wall. The closer, the better, all while accelerating smoothly through this section into the Outside Zone 2 in front of the grand stands.

Both drivers must fill this entire zone sideways with the rear of the car grazing the wall if possible.

Right after that, they accelerate into a transition for Touch-&-Go 2, where both cars set the rear close to the wall into the next deceleration zone, setting up for the Inside Clip 1 at the center of the hairpin and accelerating half way through the corner flat out to the finish line. Then they go back, swap places at the start line, then go again.

But now the judges have different instructions for each driver. The lead driver must run the course as perfectly and smoothly as possible with lots of speed, angle, and style. The judges want to see the equivalent to the cleanest possible run the driver can do with zero corrections or errors following the course map making a chase-able run. The chase driver must mimic the lead driver’s every move as close as possible. The chaser cannot initiate earlier than the lead at the start into the first corner to stay close.

After that, it is the chase driver’s job to mimic the lead driver’s line while maintaining the closest proximity possible without touching through the entire course. The chase driver can attack the lead car by matching or bettering the amount of angle through the course without losing proximity. This has a lot to do with the style and aggression of the driver. Different drivers attack in different styles, and can make for a favorable call if done with style all while matching the requirements of running the course.

Bryan Younghttp://maximumdriftcast.com/
Bryan Young has been in the drift scene since 2008. He has owned a few drift cars for drifting and has taught drifting to newcomers. He has volunteered as a crew member/spotter for local ProAm driver Austin Kriegle and a control room operator for the Maximum Driftcast podcast. He currently drifts a 1991 Lexus LS400 with a manual transmission and other modifications.